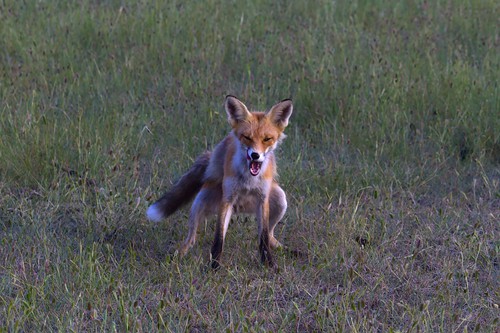 Fox poop, also called scat and droppings, is a smaller tan version of coyote poop. Their scat is long and tubular. The three-inch-long poop tapers at the end and may have fur, bones, and berries inside it.

The appearance of the red fox’s scat can vary in appearance. Based on the ingredients inside, the color and components of the scat will differ. The size and gender of the red fox can also influence the size of a fox’s scat. In some cases, this can cause the scat of the fox to appear more similar to other animals like coyotes and large cats.

Red foxes poop similar to most other animals by squatting. However, the red fox does not cover its droppings with dirt after going to the bathroom. Leaving their scat uncovered allows their scent to spread so other animals smell their scent-marking.

Fox poop appears similar to coyote scat, although slightly smaller. It is long and tubular, with slight tapering at the ends. The overall appearance and size of poop can vary depending on the fox’s diet and size.

As the poop ages, it will begin to decompose and mold. The decomposition causes the poop to turn white.

What Color Is Fox Poop? (Can It Be White?)

Fox poop is typically tan, with the presence of bones, hair, seeds, fruit, and other things in a fox’s diet. The decomposing animal fur inside the fox poop can cause the fox scat to turn white. When the fox scat begins to decompose, the entirety of the fox scat will turn white.

How Big Is Fox Poop?

The red fox’s poop is roughly two to three inches long, tapering at each end. Fox poop is about ½-inch in diameter.

Can You See Seeds And Kernels In Fox Poop?

Their poop can attract large predators like mountain lions, pumas, coyotes, and wolves. Smelly fox poop can also drive away prey such as small mammals and insects.

What Is Fox Poop Called?

The formal name for fox poop is called scat. Fox scat can also be referred to as feces, droppings, and poop. There are many names that people will refer to fox feces. It all depends on the person’s preference.

What Other Animal Could It Be From? (Raccoon, Coyote, etc)

Fox poop looks similar to the poop of a few other animals, including coyotes. Several other animals have similar scat to the red fox.

Animals whose poop has a similar appearance to the red fox include:

You can identify fox scat by the food remnants inside of the poop. Foxes have berries, fur, and undigested bones in their poop. Larger canines and large cats may have similar components, although the size will be much larger.

How Do I Tell The Difference Between Fox and Coyote Poop?

Fox poop is smaller than coyote poop by roughly one to two inches. Coyote poop is darker than fox poop and typically has a purple hue because of the berries coyotes consume.

How Do Foxes Poop?

Foxes poop while standing and squatting. Depending on their diet, the strain required to pass their bowel movements will vary. Red foxes will poop in concentrated latrine areas as a group. Pooping in a grouped area is great because it causes the smell to multiply.

Where Do Foxes Poop?

Foxes typically poop far away from their dens, so they do not draw predators to their dens. Groups of foxes will poop in concentrated locations to make their group appear larger than they are.

Do Foxes Bury Their Poop?

Do Foxes Poop In The Same Spot?

Foxes poop in concentrated locations, which they refer to as a latrine. Latrines are located far away from fox dens to help mark territory without exposing the exact location of the fox dens.

Pooping in the same location is great for foxes. It allows them to portray having larger numbers than the group of foxes have. Excessive smell confuses large predators, making them believe there are more foxes in the area than there are. This practice of pooping in concentrated areas is similar to the latrine practices of the wild canine, the coyote.

Why Are Foxes Pooping In My Garden?

When small mammals and rodents smell fox poop, they are likely to leave because they fear this predator.

Red foxes typically poop on the perimeter of your garden rather than inside of it. Removing droppings from the garden is not the best solution because it will only cause the red fox to return.

How To Stop Foxes From Pooping In Your Garden

Strong odored spices like chili powder are great for overwhelming a fox’s senses. You may also surround your garden with vinegar. Wolf and coyote urine are great repellants for foxes because they can make foxes think large predators are in the area. You can actually buy coyote urine off Amazon!

Are Dogs Attracted To Fox Poop?

Dogs may roll in red fox droppings, eat droppings, and mark their territory by urinating and defecating on top of the droppings. Competing for territory is one of the most common reactions to finding droppings because dogs are so territorial.

Is Fox Poop Harmful To Dogs?

Dogs are very attracted to red fox poop, and it can be extremely dangerous to dogs. Red fox poop contains parasites that can be life-threatening to your dog consumes them. The smells of red fox poop are also very long-lasting and difficult to get out of your dog’s fur.

What Is A Fox Poop Shampoo?

Red foxes have a strong odor that can be relatively unpleasant to humans. When the red fox is frightened, the odor can become increasingly intense.

The red fox’s unpleasant scent comes from several scent glands and sacs located at the base of its tail. This odor releases when they become fearful, mate, are in heat and clean themselves.

Red foxes produce many smells, including a musky smell that comes from the glands on their anuses. Foxes rub their bodies against trees, rocks, and other things to mark them with their scent. While scent marking, they also take on the scent of these things too.

Some scientists have said this foul, musky odor can be mistaken for the flowery smell of violets. The smell of the red fox has also been compared to the smell of a skunk’s spray. However, red foxes do not have such an intense odor that skunks do.

How Do Foxes Urinate? (Sitting Or Standing?)

Foxes urinate by standing and squatting. Male foxes will stand and lift their legs to urinate in an upright position. The male fox’s urination is done at nearly a ninety-degree angle so the male can mark scent while relieving themselves.

Female fox’s squat urination is similar to female domestic dogs. The vixen’s main priority when urinating is to relieve themselves and not scent-mark like male foxes.

As kits, the young red fox will squat to urinate, despite their gender. Male foxes will gain balance and slowly learn to lift their legs as they pee.

Does Fox Urine Damage Your Lawn?

Red fox urine can severely damage your yard. The discoloration will cause yellowing and craters of dead grass. Excessive dry spells and severe moisture deprivation can increase the damage caused by red fox urine.

In addition to damaging your yard, fox urine is also extremely smelly. The smelliness of fox urine can be long-lasting and extremely difficult to get rid of. Generally, the only thing that can remove fox urine is to wash it off with a hose and let it fade naturally—letting the smell fade naturally can take weeks.

Using fox feces in your garden can be dangerous if you own pets because dogs are often attracted to the smell of poop. If dogs eat poop, they can become sick with a fatal illness.

Fox urine is very damaging to lawns and plants. You should never use fox urine for fertilizer, or you are risking damaging your garden.

Do Foxes Urinate On Their Food?

Foxes urinate on food to claim it as theirs. Urinating on food is a form of scent marking for the red fox. Other animals do not want to eat their food after a fox has urinated on it.

Scent marking behavior occurs even when there are no food remains.

Can You Use Fox Urine To Repel Other Animals?

Red fox urine is a repellent for small mammals and rodents. Urine is a great repellent because it emulates the presence of red foxes. Red fox urine is extremely pungent and can be difficult to remove. If you want to use fox urine to repel other animals, you should prepare yourself for the intense smell.

How Is Fox Urine Collected?

The red fox urinates like normal, and then an underground collector gathers the urine. Gathering urine using this method is humane.

Foxes will regurgitate their food to their young. Regurgitating their food is an integral part of the feeding process since fox kits cannot chew food as newborns.

Vomiting, on the other hand, is a sign of sickness. If foxes eat something toxic, including poisonous berries or human food, they will vomit to expel the toxins from their bodies.

Vomit is composed of regurgitated food. The most common components of this regurgitated food include the meat of small rodents, berries, insects, plants, and more. Foxes will throw up anything they eat for their young.

Spending on what the red fox has eaten, the color, consistency, and amount of vomit will differ.