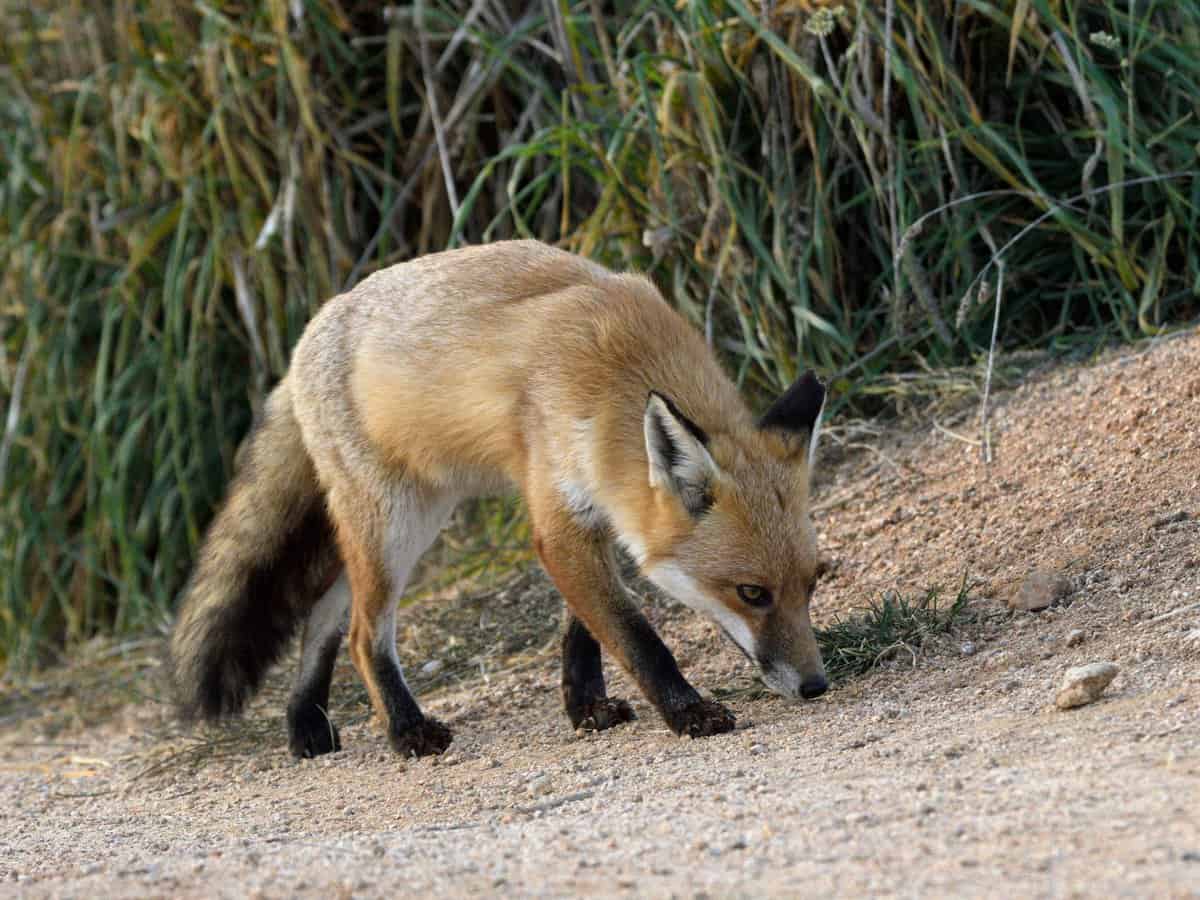 The red fox is known as a sleek animal, with its sweet face and long nose. That long nose does more than allow the red fox to dig; it also contributes to the fox’s ability to smell its surroundings.

Being that the red fox is similar in appearance to a dog, many wonder how similar foxes are to dogs in other characteristics. Understanding how the red fox operates is ideal if you live in an area where red foxes tend to roam.

Red Foxes and Their Sense of Smell

Two important senses that red foxes utilize often include their sense of smell and sense of hearing. Foxes will often use these two in tandem in order to examine their surroundings, catch their next meal, and navigate. In terms of hunting, their sight and hearing are dominant, but the fox will rely on all senses together as they each play an important part in helping them hunt.

Do Foxes Have A Good Sense Of Smell?

Foxes have quite a perceptive sense of smell, and they will use this trait to their advantage. They are able to detect the smells that are familiar to them or are desirable to them, and it seems as though they are able to remember what those smells can be associated with.

On the roof of a red fox’s mouth, there is tissue that, when exposed, aids in a fox’s ability to pick up on scent. This is similar to a cat, who also uses the roof of their mouth to learn more about what they are smelling.

That being said, experts disagree on just how good a fox’s sense of smell actually is. Some say it’s incredibly powerful, while others say their other senses are much more reliable.

From How Far Of A Distance Can Foxes Pick Up A Scent?

Some studies suggest that a fox’s sense of smell doesn’t travel an extensive distance. This particular trait has not been widely studied, but in studies that have taken place, it was observed that some foxes couldn’t detect scents farther than a few feet from them.

What Do Foxes Use Their Sense Of Smell For?

Foxes will use their sense of smell to help them track potential prey. They enjoy hunting, but they are also known for scavenging from prey that has been hunted by another animal.

Foxes will also use their sense of smell to communicate with other foxes. They are able to learn of each other and their territories through the smells they emit through different parts of their body, which foxes are able to pick up on. For instance, foxes mark their territories with urine and excrement, which helps other foxes to know who is the dominant fox in the territory.

Do Foxes Have A Better Sense Of Smell Than Dogs?

A dog’s sense of smell is much stronger than a fox’s. This is theorized to be a result of the structural differences between a dog’s face and a fox’s face. Some might be surprised to know that foxes and dogs are actually related.

Are Foxes Attracted To The Smell Of Blood?

There’s evidence that people who use fertilizers that contain blood or blood meal can attract foxes, given that they can expect bugs to be close by. However, it’s unknown whether or not they are attracted to blood from an animal.

That being said, they do enjoy the remains of other animals’ meals, so it’s possible that they could be attracted to the smell in the hopes that it’ll lead them to a snack.

There is no definitive answer regarding whether or not foxes can smell fear. Foxes actually tend to be timid animals, so chances are that unless they are encountering a human or a predator, fear wouldn’t deter them from what it is they are after either way.

Being that foxes also communicate with each other through their various scent markers, located on different parts of their bodies, the smells of other foxes can attract a fox when they detect it in a certain area.

Foxes are known to be deterred by the smell of pepper. They are not fans of capsaicin, which is the main component in many peppers, including spicy varieties. Chili peppers seem to be the fox’s least favorite pepper.

White vinegar is also another smell that repels foxes, as they tend not to like overly pungent scents. Spraying it outside of your home or leaving it out in a bowl will help keep foxes away temporarily, but you will have to repeat the process to keep them away for longer.

Foxes also tend to be afraid of humans, so they aren’t too keen on our smell, either. However, if a fox is familiar with certain humans and tolerant of them, they can tell the difference between those humans and humans they don’t know.

Foxes have started to learn to adapt to the urbanization of their previous habitats quite well, making them a little less afraid of humans. Humans might have to put in more effort to keep foxes away from them, given that their scent alone is sometimes not enough to protect them from a hungry fox.

Foxes can also be repelled by scents from their predators, such as the wolf. Thus, people who need to protect their property from foxes might spray wolf urine around its boundaries.

Whether or not a red fox smells bad would be a matter of opinion, but they do emit a strong scent. Their ability to emit strong and discernable odors is important to their nature, as it helps them communicate with other foxes in many ways.

A fox’s urine and waste also tend to be quite pungent, which is what often alerts people to foxes being nearby.

A fox has a unique, musk-like odor that is hard to describe, being that it isn’t similar to other animals. Thus, a person familiar with foxes would suggest that, once you are able to smell a fox, you will remember that scent and associate further interactions with that particular odor.

It has also been said that foxes can smell different depending on whether or not they are pregnant, what gender they are, and how afraid a fox is. This is mainly anecdotal and there’s no evidence to suggest that humans can detect these minute differences in a fox’s scent.