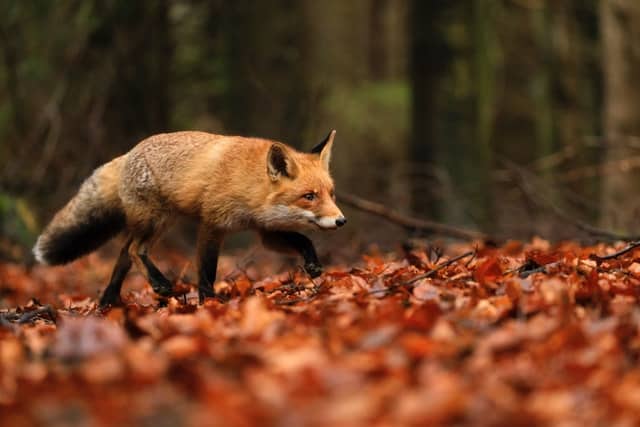 Red foxes are sneaky animals who often outsmart other mammals with their wit. Farmers are one of these animals’ most common victims. They eat farmers’ chickens and steal the eggs.

Because of the fox’s sneakiness, farmers do not notice until foxes have already stolen their farm animals. Installing an automatic door or increasing the height of your fence can sometimes solve serious problems like egg-stealing or chicken eating.

Eating chickens and stealing eggs is normal fox behavior. The fox cannot unlearn this habit and is a big reason why they cannot be domesticated. As a canine, foxes are relatively similar to domestic dogs. However, you can train dogs, whereas, with the fox, you cannot.

Foxes have very specific behaviors, such as stealing and being sneaky. These behaviors are not necessarily specific to the fox. Instead, they are normal canine behavior.

For the fox, stealing household items and necessities is common behavior. This wild canine is known for taking items from humans and other animals. They will steal items from people such as shoes, phones, and dog toys.

Below is an example of a fox stealing a videocamera that’s actually recording!

Stealing objects is a natural part of the fox’s canine behavior. One of the most common items that foxes steal is eggs. They will steal these items from farmers and then cache them for later consumption.

They are also known for their sneakiness, which is a trait that helps them get away with stealing. Foxes can go unseen in the night because of their small stature, stealth, silence, and awareness. The red fox is extremely aware of its surroundings.

Foxes are highly intelligent animals. They are dexterous, often using their paws to climb tall fences up to six feet tall. They are also highly observant, which helps them make decisions based on survivability. They evaluate nearby predators, helping them decide whether they should risk approaching an area for food.

Foxes are intelligent animals who are much smarter than most animals, even of closely related species. They use this intelligence to their advantage when hunting, mating, and stealing food from their prey.

Are Foxes Smarter Than Dogs?

In some ways, foxes are smarter than dogs. However, dogs have a higher intellectual capacity, making them superior to foxes.

Domestic canines can be trained to obey commands, such as sit, no, and come -among many others. Dogs can also be house-trained and domesticated, whereas foxes cannot. Therefore, people believe the red fox is not smarter than the domestic dog.

You cannot tame the red fox. People have attempted to domesticate this wild canine, including breeders in Russia who have managed to get close. However, the red fox cannot be successfully tamed and domesticated.

Foxes are highly agile, which helps them gain access to many human areas. A frequent visiting area of the fox is the chicken coop. Chicken coops are easy to access, and there is often little protection between chickens and the outdoors, making it easy for foxes to enter and exit without being noticed by farmers before it is too late.

Other farms also frequently visit locations, such as sheep pens and other areas where farmers keep other small mammals. Foxes will also venture into urban areas, where they will sneakily steal food items and pets from people’s yards.

If you are not careful, outdoor animals like dogs and cats may be stolen at night by the fox.

How Do Foxes Get Into Chicken Coops?

When farmers leave chicken coops open, foxes sneak into the coop doorways. Unfortunately, some farmers do not have doors on their chicken coops, which leaves them unprotected. Foxes capitalize on the lack of protection by sneaking into the chicken coops after dark.

Fortunately, foxes cannot open doors or unbolt locks or undo latches, meaning a door will prevent them from entering your coop. They will give up because they are opportunistic hunters who do not typically exert more effort than necessary.

Can Foxes Rip Through Chicken Wire?

Foxes do not typically rip through barbed wire or chicken wire. Instead, they will hop over the chicken wire. Foxes are excellent jumpers who can leap three feet in the air and climb beyond six feet -when using their nails for grip.

The red fox may dig underneath the chicken wire if you do not install it properly. You should install chicken wire at least half a foot under the ground to ensure they cannot dig under your fence. When a fox digs and encounters the chicken wire, it will give up.

Red foxes can only jump three feet high, meaning any fences installed above at least two times this height will keep foxes out of your yard. Combatting foxes from your yard is important if you intend on keeping your pets or farm animals alive.

An automatic lock can help you significantly. Automatic locks will keep your chickens from escaping at night by automatically sealing your coop door shut at a time of your choosing. (Here’s one on amazon).

These automatic doors work on a timer so you can set the appropriate time for closing. Unfortunately, an automatic lock only works if your chickens are familiar with returning to their coops at the end of the day.

Installing a tall fence over six feet tall is a great way to keep red foxes at bay. Foxes can only jump and scale fences that are six feet high. Anything higher than six feet is too high for a fox, even with sharp claws.