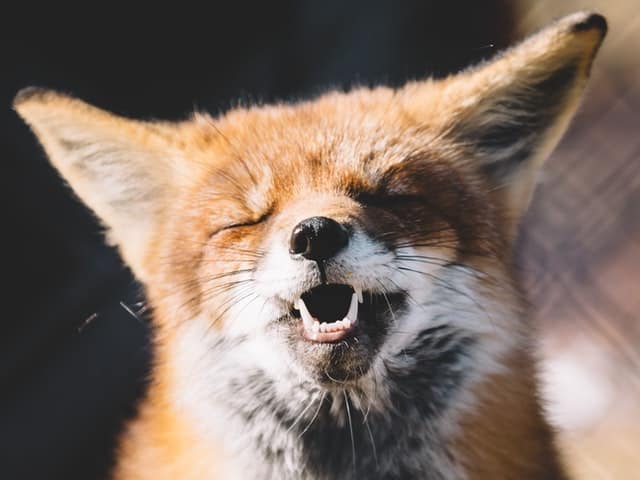 Red foxes use a variety of sounds to communicate with each other, like barking, screaming, and yipping. Many of the red foxes’ vocalizations are similar to the domestic dog. Because sounds red foxes make are so similar to dogs, they are easily mistaken for each other.

The red foxes’ vocalizations vary significantly, both in sound and in the meaning of these sounds. In some cases, red foxes may use the same vocalization to express the same thing.

Screams are the most common form of communication for the red fox and they have several meanings. A fox screaming represents anything from mating behavior to basic communication. The intimidating sounds of a red fox screaming typically keeps potential threats at bay, which keeps the foxes safe in their territory.

Sounds Red Foxes Make And What They Mean

Red foxes are very vocal animals that make a lot of noises, like barking, howling, and yipping. These noises have very different meanings in the red fox communities.

Many sounds that red foxes make are similar to domestic dogs. Noises like barks, growls, and whines are similar because of their close genetic relationship. However, the identity of the red fox can be distinguished because of its high pitch.

Barking is a common noise that foxes use for self-defense. This noise wards off enemies and expresses anger. Foxes will also bark as they play with each other.

Howling is a nighttime practice often performed by foxes when gathering in packs. Foxes typically howl when they are defending territory.

Growling is a common practice for red foxes when trying to fight off enemies. The fox’s growl is one of the most low-pitch noises made by the fox. Despite having a typically high-pitch tone, the red fox lowers its pitch to intimidate approaching predators.

People sometimes refer to their growls as gekkering. Gekkering is a form of vocalization where the fox uses their gruffed tone to intimidate rivals. Oftentimes, the pitch and lengthiness of this noise make the fox appear larger than it is.

Females will scream to attract male foxes during mating season. On the other hand, male foxes scream to ward away competing mates. Through the mating process, the female will continue screaming.

These screams are similar to the sound of an adult, screaming woman. A red foxes’ scream can be short and abrupt. Or, they can be long and drawn out.

Crying is a common noise for the fox. The crying sound the red fox makes is similar to babies or grown women crying. Foxes cry to ward off approaching predators.

Yelping is a common sound of distress for red foxes. A red fox who yelps is signaling to other foxes or large predators that they are fearful.

While mating, male foxes may yelp to indicate they are excited about their new mate.

The yips of red foxes are easily mistaken for domestic dogs. Yips can be used in a variety of ways, such as a defensive mechanism, in play, while mating, and more.

When approached by an aggressor, foxes may yip at the animal to indicate they are displeased with their presence. The yipping noise is also a signal for fellow fox allies to join them in defensive measures.

Yipping can also be used while playing. Red foxes often play with one another, yipping as they do so. The way a red fox uses yips depends on the relationship they have with the animal they are tipping at. It also varies based on their pitch and how they act as they do so.

Laughing is a strangely common noise for foxes. A red fox’s laughter sounds eerily similar to human laughter, mainly the laughter of an adult woman.

There is no general reason why red foxes laugh aside from pleasure and excitement. At the end of the night, foxes will gather in groups and laugh together. Laughing together is their way of expressing joy as a group.

The laughing noise that foxes make is similar to the laughing sound of coyotes and wolves. The similarity of these noises is good for the fox because it keeps the other animals away -as long as they are not on the other canine’s territory.

Red foxes will whimper when they feel threatened or in danger. It is a submissive sound that often indicates they do not want to fight. Many red foxes will make this sound while playing, mating, or meeting a new fox.

Whimpering is also a common red fox behavior for newborn foxes and fox kits because their vocalizations are limited to minimal noises. Kits will whimper for their mothers and pack members if they get lost.

Red foxes also whimper to attract prey or ward off predators. Their whimpers may emulate the sound of a human baby, which can be dangerously confusing for humans.

Whining is a common noise for foxes who are expressing discontent, sadness, or boredom. Foxes may whine when they are playing, typically as a way of aggressing their playmate. Many scientists and animal lovers also consider the foxes whining as a greeting.

As a kit, foxes will whine to express general needs. They use this general sound as a form of expression since they cannot fully vocalize their needs and emotions yet.

Hissing is a warning sign of the red fox. Hisses mean the red fox feels threatened and is ready to attack if necessary. Many mother foxes will hiss at animals who approach the den of her newborn kits.

If you encounter a hissing fox, you should leave it alone and retreat to where you came.

Panting is normal fox behavior used to lower body heat, a little like dogs. Foxes pant when they are hot to try and lower the temperature of their body. Panting to lower body temperature most often occurs in hot climates and areas where water is not readily available.

Foxes do not typically whistle. Although they do not make whistles, the high pitch tone can often make their screams and yelps sound like whistles.

Red foxes do not meow. The appearance of the fox is sometimes mistaken for cats. However, the fox is closely related to the canine dog. Therefore, the red fox adopts similar noises to the domestic dog and not the domestic cat.

Some barks and whines that the red fox makes a sound high pitch, which people can claim are similar to meows. Still, these are not considered meows by the animal or scientific community.

The red fox does not purr. Red foxes are canines and not felines, so they do not take on feline behaviors or noises. For instance, the red fox barks, but it does not meow.

What Do All Those Noises Mean?

Although some noises are similar, they each have a different meaning.

Screams are the most common form of communication for foxes. They use screams for general communication, mating, and more. Screaming is a great way for foxes to defend territory, celebrate together, and ward off predators.

Do Foxes Vocalize A Lot?

Foxes are very vocal animals that express emotions and needs through a large variety of noises, like barks, yelps, and yips. Red foxes also vocalize mating needs, socialize with each other, and ward off enemies.

Foxes typically limit communication to nighttime, so they do not draw in larger predators. Noises red foxes make are similar to larger animals. In the darkness of nighttime, large animals cannot identify the fox.

Why Are Foxes So Noisy?

Foxes are noisy because they are competitive animals. Male foxes are especially noisy. They will scream and bark at other foxes to defend territory and compete over mates.

Foxes can make several noises, which vary in pitch and sound. Foxes sound similar to domestic dogs.  The sounds they make are similar to dogs, such as barking and growling. However, the pitch is generally higher. The high pitch of the foxes makes it easier to distinguish foxes from small dogs.

What Other Animals Could I Be Hearing?

As a type of dog, the red fox makes many similar noises to other canine species. Other animals have a much lower pitch.

Do Foxes And Coyotes Sound The Same?

Foxes and coyotes make many similar noises, making them very difficult to distinguish at times. Nearly every noise that the fox makes, the coyote also makes.

Both of these wild canines howl in groups, but it is much more common for the coyote.

To determine if the fox is responsible for the noise, pay attention to the pitch. Foxes make higher-pitched noises than coyotes. Furthermore, coyotes often howl or whine in groups, whereas foxes are solitary animals who bark, yip, and whine alone.

In the mating process, male foxes will yelp and bark to keep other foxes at bay.

Foxes are monogamous mammals, which means they pick one partner and mate with them for life. The mating process is highly competitive, so do not be surprised if you hear male foxes screaming and howling at each other as they compete over the female fox.

To combat a male fox’s advances, the female fox might scream or growl. These noises indicate that she is either uninterested or already coupled with another male fox.

When foxes are kits, they communicate through soft huffs and whines. Body gestures are a large part of the fox kit’s communication.

What Sounds Do Foxes Make When Fighting?

Foxes make similar sounds to dogs when fighting, like growling, snarling, and yipping. The most common noise that foxes make while fighting is barking and growling.

Foxes make happy sounds like yipping and howling while they play. Foxes will also laugh while playing, a noise that is eerily similar to the human laugh.