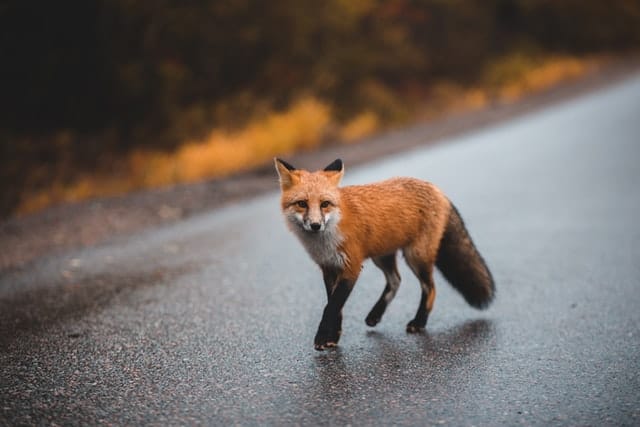 The red fox, better known as the common fox, is found all around the globe. With the exception of human beings, red foxes have the largest natural distribution of any mammal. You can find them in Europe, Asia, Africa, North America, and even Australia due to their cunning abilities and hunting skills.

Interestingly, red foxes are actually related to dogs, but they belong to a different genus. As a result, red foxes can be thought of as cousins to your favorite puppies and pet dogs. Keep reading to learn more about red foxes because there is a lot more to know!

The Red Fox Species – Some Questions About The Origin

Experts believe that the red fox originated from smaller ancestors during the Middle Villafranca period. More specifically, these animals are believed to have originated from Eurasia and colonized North America after the Wisconsin glaciation.

What Kind Of Animal Is A Fox?

Common foxes belong to the Mammalia class and Canidae family. The Canidae family is the family of dogs or animals that are medium-sized with bushy tails, long fur, pointed ears, and narrow snouts. In other words, foxes are technically a type of dog, much like a wolf or coyote.

Are They Marsupials, Rodents, Weasels, or Something Else?

Even though foxes are small and sly like weasels and rodents, they are neither. Likewise, foxes are not marsupials. Instead, foxes are a type of mammal, which is a warm-blooded vertebrate that has fur, feeds their young milk, and birth live babies. Within the mammal class, foxes belong to the dog family.

By definition, an apex predator is one that has no natural predators. Because the red fox is often hunted by wolves, dingoes, and even eagles, it is not an apex predator. Still, foxes are considered a predator because they eat other small animals, such as rats and rabbits.

Are Foxes More Closely Related To Cats Or Dogs?

Are Foxes Actually A Type Of Dog, Like A Wild Dog?

What this means is that although foxes belong to the same family as dogs, they split on the family tree. In this way, it may be helpful to think of foxes as being cousins to wild dogs and domesticated dogs.

Did Foxes Originate From Dogs? What Does Evolution Say?

Foxes originated from wolves and dogs around 12 million years ago. Experts believe that this split happened during dog domestication. Consequently, foxes belong to the family of dogs, though they are separate species.

How Closely Related Are Foxes to Wolves and Coyotes?

Foxes belong to the same family as wolves and coyotes. All three species belong to the Canidae family. However, these animals belong to different species, making foxes a cousin to coyotes, wolves, and other wild dogs.

Where And When Did Foxes Evolve?

The evolution of foxes is difficult to track since they are a different genus than other Canidae members. Experts believe that foxes separated from most other Canidae animals around 12 million years ago on the continent of Europe before expanding to North America.

Most likely, foxes separated from wolves and other wild dogs whenever dogs were being domesticated. Although foxes are not domesticated like your pet puppy, they have much milder personalities than wild dogs, which represents a step towards domestication.

How Have Foxes Adapted To Their Environment?

Foxes have adapted to many environments because of their body size, body features, and hunting abilities. Because of these features, red foxes can survive many temperatures, climates, and conditions.

More specifically, the red fox’s body is compact, yet covered in fur. This allows the red fox to conserve heat in cold temperatures without getting too hot. More so, red foxes are cunning and learn to adjust hunting skills based on their location and prey so that they always have food sources.

Are Foxes an Invasive Species?

The red fox is listed as one of “the world’s 100 worst invasive species” in Australia, Tasmania, and New Zealand. Red foxes are not native to these countries and only was introduced to these locations in the 1800s. As a result, red foxes hunt dozens of native species.

Elsewhere in the world, the red fox is not necessarily invasive since it is native there. Still, red foxes are considered to be of least concern everywhere because of their adaptability.

Are Foxes A Keystone Species?

Red foxes are considered keystone species, which are species that help the environment, in areas where they are naturally distributed. In these locations, the red fox keeps rodent and small mammal populations in check. This helps to keep a natural balance in the environment.

That being said, red foxes are the opposite of a keystone species in areas where they are not naturally distributed. In Tasmania, for example, red foxes are not native and prey on over 70 different native species, including some threatened species.

In other words, red foxes are keystone species in areas where the animal is native, but it is an invasive species elsewhere.

Red foxes are not likely to go extinct any time soon. Based on the world conservation status, red foxes are considered to be of least concern, meaning they are neither threatened nor almost extinct, though they have slightly decreased. It is estimated that there are as many as 20,000 red foxes on the globe.