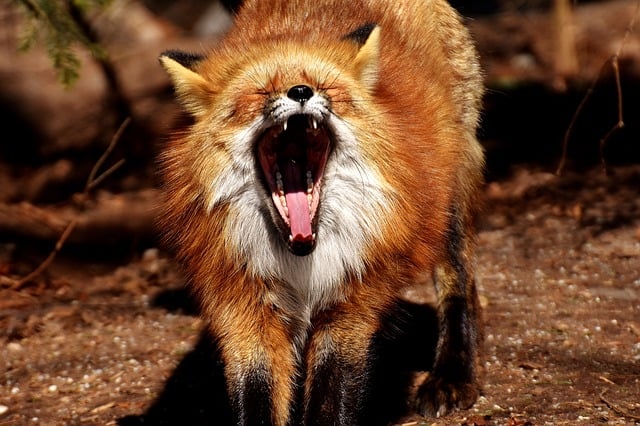 Foxes have forty-two teeth that are sharp enough to pierce human skin. However, they will not typically attack or bite a human without probable reason, such as provocation or disease. As an omnivore, they have a specific diet that requires sharp teeth. They use these sharp teeth to dig into their prey and eat them.

The fox’s jaw is only a few inches long, but it can open wide. The red fox’s sharp teeth and bite force quotient of 92 help them latch onto their prey and keep them from escaping. They use this latching mechanism to tear apart and eat their prey easily. They also use their mouth to transport their kits.

Fox bites can be dangerous because of the potential diseases that they carry. If you or your pet are bit by a fox, you should seek medical treatment immediately. An emergency room or a veterinarian will issue treatment to prevent potential negative reactions to diseases.

Foxes are omnivores whose teeth are designed for tearing apart and eating meat. The fox has forty-two teeth, consisting of twelve incisors, sixteen premolars, ten molars, and four canines. Foxes have a nearly equal number of teeth on the top and bottom aside from their uneven molars on the top and bottom.

The top of the fox’s mouth has two molars, and the bottom has three. The sharpness of the fox’s teeth makes it easy to pierce flesh and rip the meat apart.

Their teeth look similar to other members of the Canidae family, like the wolf and coyote. They have interesting fang-like teeth called canines located on either side of the incisor teeth like all predatorial mammals, including humans.

The fox’s jaw is roughly three to four inches long, and they can widen it nearly a quarter-foot wide to eat small mammals, like bunnies and mink. Small mammals are not the fox’s only limitation. According to the National Library of Medicine, the fox’s jaw can widen enough to latch onto animals nearly the same size as itself.

Since a fox’s jaw can elongate wide enough to help them eat large prey, they are capable of eating or biting domestic animals. If there is a bite on your dog, it could be from a wild canine like the fox. If bitten by a fox, your dog will need medical treatment.

How Do Foxes Bite?

The primary way that foxes use their jaw is to eat and bite. They bite and tear apart food with their teeth, which is why it is so important for them to have strong bites and sharp teeth. Foxes use their strong jaws to latch their jaw shut tight and hold onto their prey, making it impossible for them to escape.

Foxes may also use their strong bite in a more peaceful way, to transport their kits in their mouths. They latch onto the excess skin on the back of their kits’ necks and then carry them to and from different den locations.

Foxes will bite for many reasons, but they rarely bite humans since they do not get near them. They are fearful of humans and tend to avoid them. Foxes will only bite humans if they (the foxes) are disease-ridden or hurt and provoked by humans.

A hurt fox is more likely to bite humans than a healthy one. If you approach an injured fox, they may bite you by instinct to protect themselves.

Diseased foxes will bite humans because they are confused or hostile. Confusion and hostility are often the results of illnesses like rabies and other similar diseases. If a fox begins approaching, it could indicate that they are diseased -since most wild foxes will not approach humans.

Humans can be bit by foxes if they provoke them. Biting is one of the fox’s only forms of defense, especially against large predators like humans. A provoked fox does not need to be physically prodded. Provocation can occur because they feel threatened.

For instance, a fox may feel threatened because you have invaded their territory. This can cause them to attack you and bite you defensively.

Treating Fox Bites: How Do You Treat A Fox Bite?

You should treat fox bites by receiving emergency treatment. Foxes carry dangerous diseases which professionals can only treat.

If a fox bites you, you should seek medical attention immediately. Foxes can carry many contagious diseases that can be dangerous to humans. You must report to the hospital as soon as possible. Even if an illness does not show immediately, an infection may begin later.

Bitten Animals and Livestock Get Treated By Vets

In addition to disease, foxes have sharp teeth, and they can easily tear into the skin of domestic animals. They can also use their sharp teeth and nails to dig into the skin of livestock like cows and goats. You will need to attend to these deep gashes immediately.

According to the Proceedings of The Royal Society, the higher their bite force is, the larger prey the animals consumed. Since the fox has a moderate bite force, it proves they can consume food even larger than themselves (e.g., the coyote).