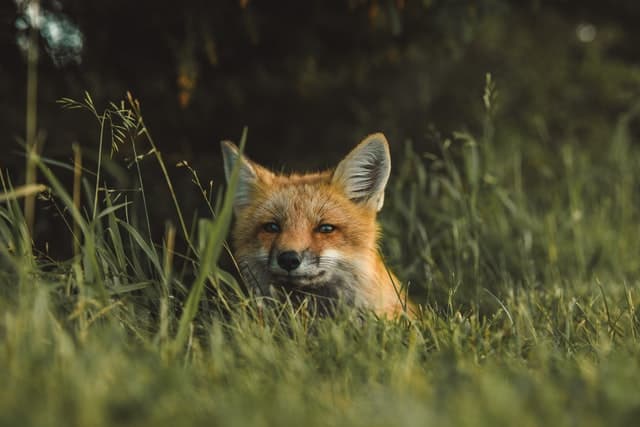 Red foxes are an abundant species with no concern of becoming extinct based on their population count and reproduction rate. There are foxes on nearly every continent, with millions of foxes inhabiting the planet. The red fox is adaptive and great at maintaining its high numbers.

Foxes can be keynote species in places they are a nonevasive species. They balance ecosystems, maintaining the populations of small rodents, birds, and insects. Foxes are necessary for areas with high rat or pest populations because they balance the numbers.

The current conservation status in the United States for the red fox is at “no concern” for extinction. According to National Wildlife Foundation, people have pushed the red fox out of its habitat by destroying its habitat. However, the adaptive animal continues to reside in these areas by finding wooded places to live.

What Are Some Dangers To Red Foxes?

Foxes have many dangers in the wild and urban environments. These dangers include predators, environmental concerns, hunting, and more. Luckily, the reproduction rate of the red fox is high enough that they are not at threat of becoming extinct.

However, there are still some things that people must consider about the red fox species.

No matter where the red fox resides, habitat destruction is always a problem. People evict the red fox from their land to erect corporate buildings and residential homes. Building on fox territory is highly problematic because it does not always guarantee that the fox will leave. Foxes sometimes stay on the territory, turning to the urban area for food and water.

Large predators are major threats to the red fox. Coyotes, mountain lions, and wolves may eat foxes if they get the opportunity. Wild animals threaten foxes, attacking them if they attempt to cross their territory or hunt them.

Hunting the red fox is the number one way to decline a fox population in most areas. People hunt red foxes for several reasons, like for sport, selling furs, or keeping them from their property. In any case, the inhumane practice is an extreme and dangerous practice to the red fox.

Red foxes are an invasive species in some areas. Still, they should not be hunted or inhumanely removed from a piece of land.

How Can Humans Help Foxes Thrive In The Wild?

Humans and foxes can coexist if the interaction is limited. Otherwise, the fox’s life could be in danger. To help wild foxes, you should avoid feeding them. Never try domesticating them and leave as little impact on their environment as possible.

If you visit an area with foxes, dispose of your litter properly. If possible, bring trash from park areas, and dispose of them elsewhere. You should always tie garbages tight before disposing of them. Furthermore, never leave food out or purposefully feed a fox any type of human food. Feeding foxes human foods can be dangerous to their health and yours.

Minimize your global footprint by limiting the impact you make on their habitat. The more you interact with a fox’s environment, the more harm you do. Limit the time you spend in their territory to as little as possible.

Processed meat is unnatural to the wild fox, and it disrupts their ecosystem because they are no longer hunting small mammals.

You can help foxes thrive in the wild by leaving their habitats alone. Do not build houses or develop on the natural land that foxes live. You should also avoid intruding in an invasive way into fox territory. This means being careful when camping, walking your dog, and spending time in the outdoors.

Clean your environment and dispose of all trash properly. Never litter on the side of the road, carelessly toss away food, or tie trashbags loosely. Foxes can easily evolve into urban animals who wander into alleyways, public streets, backyards, and residential communities.

What Would Happen To The Environment If Foxes Went Extinct?

An area where the fox went extinct would become overrun with small rodents and other prey. The fox is a predator to small prey like rodents, insects, birds, and other small animals. Without the red fox around, these would be overwhelming in numbers.

What Are Some Fox Species That  Already Went Extinct?

Unfortunately, out of the fourteen fox species, a few have gone extinct. According to National Geographic, paleontologists discovered a set of fossils in Tibet, identified as an extinct fox named the Vulpes qiuzhudingi. These fossils indicate that a very carnivorous fox once wandered the Plateau between three and five million years ago, in the Pliocene period. Unfortunately, the Ice Age destroyed this fox species.