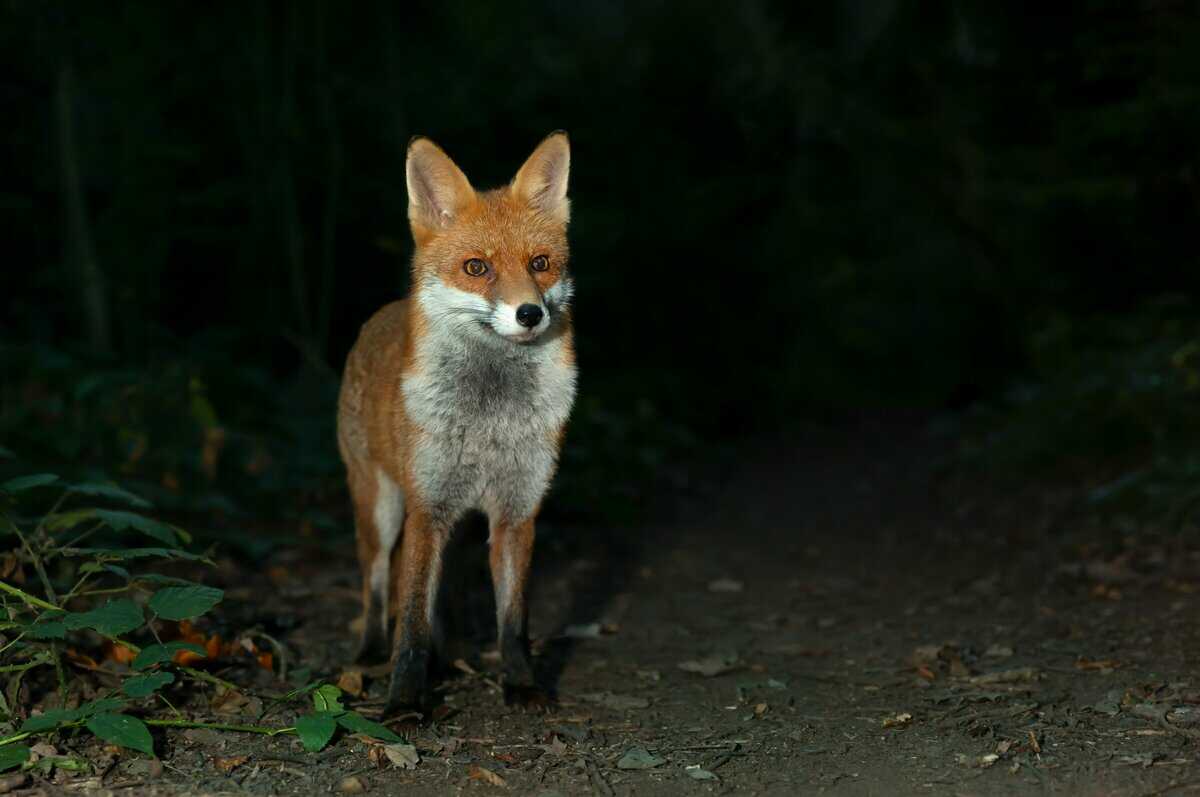 The red fox is a mostly nocturnal canid that sleeps through most of its day. The fox can be a crepuscular mammal because of its increased activity around twilight. Around this time of day, the fox’s prey becomes active.

The fox prefers a dry and warm environment. In these conditions, it can hunt for food peacefully. Despite a love for dry weather, red foxes will hunt or search for necessary resources while raining if they are hungry. Foxes can acclimate to any weather conditions. Their adaptive behaviors and effortless survival tactics make them one of the smartest canid breeds.

Foxes can travel several miles within one night. They can travel the full length of their territory if desired or stay in one area.

Do Red Foxes Only Come Out At Night?

The red fox has an irregular sleep schedule. They sleep through most of the day but may also wake when they hear predators or prey. Foxes are also known as crepuscular animals because of their evening hunting habits.

At night, foxes communicate safely under cover of night using growls, yelps, and yaps. They have excellent night vision, helping them see prey and navigate in the darkness. However, their hearing is one of the main things that help this animal hunt successfully at night. According to The Nature Conservancy, the red fox can hear a mouse squeak from one hundred feet away.

What Time Of Day Do Red Foxes Prefer?

It is not typically normal for foxes to roam freely during the daytime. The red fox is a semi-nocturnal, crepuscular canid who come out of their dens at dusk, a few hours before the sun goes down. The time the sun sets varies based on region. At this time, their prey is active.

Many foxes sleep in the sunlight. However, they can soak in the sun to form Vitamin D during sunset. All mammals require Vitamin D, including the fox. The red fox comes out several times on cloudy days and at the end of the day as the sun begins to set. Foxes still require sunlight to obtain their necessary Vitamin D.

What Do Foxes Do During The Day, When Not Sleeping?

When foxes are not sleeping during the day, they might be hunting. Foxes wake during the day to travel, roam, find new territory, and seek new mates. The red fox may also wake up and leave their sleeping area during the day because they feel unsafe or threatened by predators.

Why Do Foxes Prefer Hunting At Night?

Foxes prefer hunting at night because they can use their superior nighttime hunting abilities, like their nocturnal vision and excellent hearing. Hunting at night is a bonus for the small canid because the darkness conceals them from predators.

Although the red fox is tiny and goes mostly unnoticed during the day by their predators, as they make more noise at night moving and communicating, they could be easily get noticed. Luckily, the darkness conceals their presence.

Foxes Can Make Noise At Night

Foxes make a lot of noise at night because they do not communicate with each other during the daytime. The red fox is an expressive animal, and communication is critical. When concealed by darkness, the fox is safer from predators. They like to communicate in small groups similar to coyotes and wolves to make it appear like they have greater numbers than they do.

Foxes Are Concealed From Predators At Night

It Is Quieter At Night

The quiet night makes it easier for the fox’s superior hearing to pick up on silent noises like nearby prey rustling in the bushes. The quieter the night is, the better for the fox.

Why Do Foxes Make So Much Noise At Night?

When you hear foxes making excessive noise at night, they communicate with each other. There are many reasons, such as mating or signaling the location of a successful catch. Communicating with newborn family members and celebrating captured prey is common. It is also common to hear competitive noises, mating calls, and the sounds of two foxes fighting in the night.

Foxes may make noise at night without reason because they feel protected. After the night falls, a blanket of safety overcomes the fox. During the day, they are much less likely to make any noise because they do not want to attract predators.

What Should You Do If You See A Fox At Night?

If you see a fox at night, immediately practice hazing tactics like stomping your feet and waving your hands to scare the fox away. Wild animals like the fox are dangerous because you do not know their intentions for approaching you. Back away slowly, maintain eye contact with the fox, and keep a note of where you encountered the red fox to inform the people in your community.

What Weather Do Fox’s Prefer?

Foxes love every type of weather and climate because of their great ability to acclimate. Since the fox hunts at night, they are preferable to clear skies. It is easier for the fox to hunt when they hear their surroundings. In stormy climates, foxes can have difficulty navigating and tracking prey.

Bad Weather Does Not Stop The Fox (But They Mind It)

Rain, wind, and other stormy weather do not stop the red fox from completing their daily tasks. If they need to hunt or perform other tasks, the red fox will wake up from their daytime nap and complete the task. If it is intensely storming and the fox needs to take shelter, they usually take shelter under fallen logs, dig a den, or hide in bushes.

Bad weather does not restrict the red fox’s daily activities. However, bad weather certainly bothers the red fox. It can leave them vulnerable if the wind or rain is too loud to hear the calls of their mates.

Red foxes love snowy weather. In fact, these furry foxes will sleep in open fields and allow the snow to fall directly on them. Sleeping underneath piles of snow is both a hunting strategy and a survival tactic for the small red fox.

The red fox is fine with warm weather. However, hot weather can cause the wild canine difficulty. Luckily, red foxes can adapt to any weather. It copes with hot weather by wading in the water, laying under the shade, and lying against cool rocks. These natural ways to cool down help the fox combat hot weather.