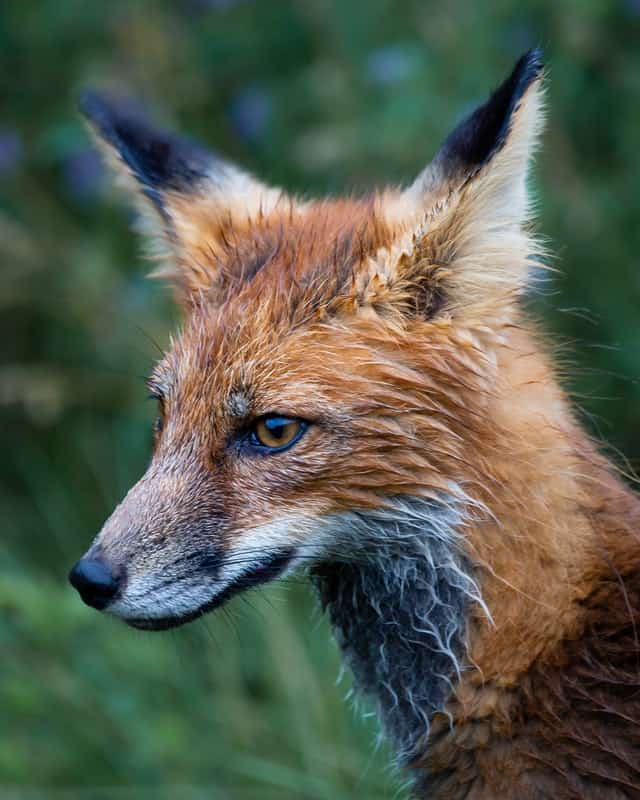 Red foxes have excellent eyesight that helps them see better at night than in the daytime. Foxes can see well at night because of tapetum lucidum, which helps the red fox adjust its vision at low lighting. Their vertically split pupils also help their night vision by regulating the amount of light they let into their eyes.

This article discusses the red fox’s great eyesight, including how foxes see, whether foxes are color blind, and all the possible colors of fox eyes.

How Good is Foxes’ Eyesight?

Tight closure is better for regulating the amount of light that enters their eyes. Light regulation helps with night vision, regulating color blindness, and adjusting from the evening onto the night.

Do Foxes Have Good Night Vision?

Foxes have great night vision for a few reasons. They mainly owe their nighttime vision to their tapetum lucidum, but they can also thank their vertically slit pupils. Their pupils contribute to the amount of light they let enter their pupils at a time. This regulation is great when encountering prey at night because it allows the red fox to follow their prey clearly like it were daytime.

Vertical pupils help red foxes remain active day and night. These canids are intelligent mammals whose hunting schedule is unpredictable. Because of their unpredictable schedule, their pupils allow them to adjust today or night as needed for hunting and foraging.

Foxes have poor recognition of color. However, they can identify shades of grey more successfully than other mammals, including humans. Foxes can detect movement much sooner than humans because of their color blindness.

What Color are Red Foxes’ Eyes?

Fox’s eye colors come mainly in variations of brown like yellow, orange, amber, and hazel. According to the Missouri Department of Conservation, foxes have a tawny eye color. However, foxes may also have blue, green, and red eyes. These colors are less frequent but still possible in the red fox community.

Do A Red Fox’s Eyes Look Different At Night?

A red fox’s eyes will look different at night if you shine a light on them. During the daytime, the red fox can have a variety of unique eye colors, including blue, orange, brown, green, and much more.

However, no matter what color a red fox’s eyes are during the day, they will always glow the same green during the nighttime if you shine a light on them unless they have a genetic deformity.

Why Do Foxes’ Eyes Glow At Night?

This thin layer inside the red fox’s eye is glossy. The canid’s eyes, which come in a variety of colors, turn green at night when you shine a light on them.

Many people compare the fox’s tapetum lucidum to cats. However, the fox’s eyes glow significantly less bright and intensely when you shine a light on them at night. No matter what color the canid’s eyes are during the daytime, they will most certainly glow green unless they suffer from one of several issues.

In addition to glowing green at night, the red fox’s eyes may glow different colors as well. Due to genetic deformity, hunting lights, or strange (non-contagious) diseases, some foxes’ eyes will light up in several yellow tints when you shine a light on them at night.

A genetic deformity such as albinoism or a melanin imbalance can cause the red fox to have a different eye color at night -in addition to an altered appearance or eye color during the daytime.

Hunting Lights Cause A Fox’s Eyes to Glow

In addition to the tapetum lucidum, which causes the canine’s eyes to naturally glow when you shine a light on it, hunting lights can cause the canid’s eyes to glow different colors besides green.

When a fox’s eyes glow something other than green, the fox cannot adjust to the color. Hunting lights such as the red light prevent the fox from adjusting because their blue-green colorblindness prevents them from recognizing the red spotlight.

Two red foxes from the same region may have different diets, and the results may show on their tapetum lucidum. The color alterations from a melanin deficiency are typically lighter and glossier, including white or yellow tints. However, it is not the only reason a red fox’s eyes may glow different colors at night.