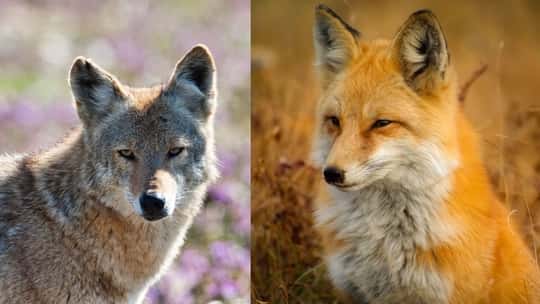 Red foxes and coyotes share many similar characteristics but they are also very different in many ways. They are both members of the canine family and have similar diets, but they have different appearances, mannerisms, and behaviors.

The discussion here focuses on red foxes, but it includes all foxes. However, it’s important to note the great majesty and beauty in both foxes and coyotes. When you explore both of them together, your appreciation for them deepens.

The table below displays a brief overview when comparing coyotes with foxes.

First of All: Is Fox and Coyote the Same Animal?

Coyotes and foxes are not the same but they do have some commonalities in habitat and appearance, among others. Albeit long-distance cousins, they aren’t interchangeable.

Are Foxes And Coyotes Related?

Yes, coyotes and foxes are distant cousins. They both hail from the canine family, the same one as your dog. But, they’re the kind of family members that don’t hang around with each other. In general, foxes often avoid coyotes.

Speed: Which One Runs Faster: Foxes or Coyotes?

When it comes to running speed, coyotes are king, achieving 43 miles per hour on average. Foxes, on the other hand, can get up to 30 miles per hour.

Size: How Do Foxes and Coyotes Compare?

Coyotes are much bigger than foxes. As a matter of fact, they’re double the size of their fox counterparts. But coyotes can range in size. For instance, coyotes in the eastern US tend to be much larger than their western brothers.

Red foxes have a height of 14 to 20 inches and are 18 to 35 inches long with a weight of up to 31 pounds. Coyotes stand about 24 inches tall and three to four inches long on average with a weight between 20 and 50 pounds.

Sound: Do Foxes and Coyotes Sound The Same?

Both foxes and coyotes have intricate forms of vocal communication. They both have high-pitched vocals but coyotes make a more drawn-out sound than foxes, which happen in brief bursts. But, both animals are audible at nighttime, when they’re most active.

Coyotes have more variation in sounds complete with howling, barking, tipping, and yapping. What’s more, researchers speculate that coyotes actually sing completely with lyrics. Plus, they make a screaming sound when they want to send a distress signal.

Foxes also bark and scream. This is more frequent during their January mating season to attract a willing spouse. Foxes can actually produce 12 different sounds that include howling, squealing, and “gekkering.”

Appearance: What Are The Physical Differences Between Foxes and Coyotes?

The legs are the most recognizable distinguishing feature between foxes and coyotes. Coyotes’ legs are longer, making them taller than foxes. But there are other differences too.

Coyotes tend to take on more wolf-like characteristics in their faces than foxes, who look a lot more like dogs. But, fox faces tend to be small with narrow muzzles whereas coyotes’ muzzles are wider to accommodate their larger faces.

When it comes to the color and texture of fur, foxes have much softer coats that come in a large range of colors. You can find foxes that are yellow-brown, white, gray, silver, or even a bold reddish-orange. Sometimes they’ll have accents of black or brown in the legs and tail.

Coyotes have rougher coats with a more limited range of colors. They come in only brown, tan, gray, or white. They usually will have peppered-looking coats that blend in with other neutral tones such as black, tawny, and cream.

Both coyotes and foxes have pointy ears, which is a common mistake in misidentifying the two. Coyotes’ ears tend to be much smaller than foxes. Foxes’ ears are large and pointy whereas a coyote’s ears are more narrow and rounded.

Coyote tracks and paw prints are much larger and longer than foxes, which are three inches and about 2½ inches respectively. Coyotes have a center lobe on their large heel pads and it protrudes. Their toes are larger, which results in bigger paw prints. Foxes have a heel pad that looks something like a chevron. But their paws are overall more petite with slender toes.

Danger: Are Foxes or Coyotes More Dangerous to You, Your Pets, or Livestock?

However, both animals are afraid of humans and avoid them as much as possible.

Dens: What’s the Difference between a Fox’s and a Coyote’s Den?

Fox and coyote dens are very similar and keep them in the same general areas. They make them underground or under huge boulders as well as in places where they can dig deep.

Other names for a fox den are fox earth or fox burrow. They store food and raise their babies in dens. But, most foxes do not actually sleep there.

Coyote dens serve the same purposes. They use it as protection for birthing and raising young. However, coyotes create dens from existing burrows made by other carnivores like skunks and raccoons. But, they will also use hollowed tree stumps and rock outcrops.

Poop: How Can You Tell the Difference Between Fox and Coyote Scat?

Since both coyotes and foxes have a similar diet, the appearance of the poop, or scat, looks similar. They will have things like bones, hair, and berries. But coyote scat is much longer than the scat left by the fox, which is four inches and two inches, respectively.

Pups: How Can You Tell the Difference Between Coyote and Fox Pups?

Telling the difference between coyote and fox pups is quite difficult because they look a lot alike.

Fox babies, or kits, can have varying colors including tan, gray, or near black. They often have dark legs and develop their primary colors within the first few weeks. Kits start with a fine silvery color with tiny pink noses that turn black later on.

Coyote pups are a dead ringer for domestic dogs. In relationship to fox kits, coyote pups will be a little bigger with wider muzzles. They also have larger paws and longer legs with colors that range between gray and tan.

Fighting: Do Foxes and Coyotes Fight Each Other?

Foxes and coyotes live in similar habitats and one may circumvent the other. But they won’t usually intermingle. However, they will fight one another, with the coyote most likely winning out.

There is evidence of foxes falling victim to coyotes, especially in more urban areas where limited territory prevents traditional boundaries. That said, in wilder and wide-open spaces, foxes and coyotes rarely, if ever interact.

Fear: Are Foxes Afraid of Coyotes? (Or Are Coyotes Scared Of Foxes?)

Although both foxes and coyotes share the same family, they are natural enemies. Because the fox is much smaller, foxes tend to be afraid of coyotes. It’s not that a coyote couldn’t be afraid of a fox, but only specific situations would dictate this kind of behavior.

Mating: Do Foxes and Coyotes Ever Mate Together?

Even though both foxes and coyotes come from the same family, they don’t mate together. They have a genetic relationship but each is a completely different genus and species. Their chromosomes are incompatible and, therefore, cannot interbreed.