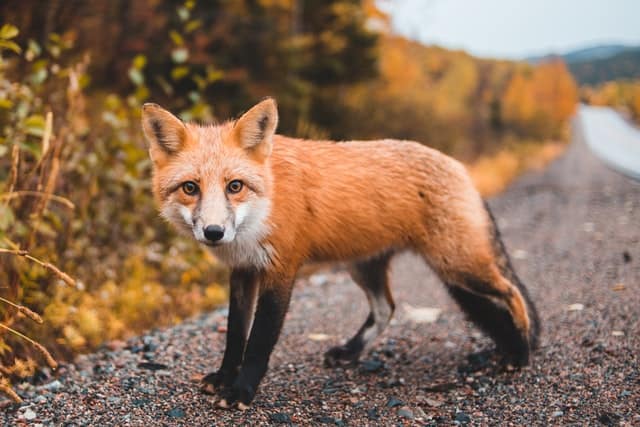 Foxes are small canids weighing between three and fifteen pounds. Foxes are typically the same size as small or medium-sized dogs. They’re about 14-16 inches tall and 22-26 inches long. However, the fox’s weight varies depending on biological factors such as species, gender, and more.

How Big Are Foxes?

Foxes are generally the same size as medium-sized dogs. However, the size of foxes varies based on species, gender, and age.  The largest living fox species is the red fox, and the smallest is the fennec.

What’s The Average Size Of A Fox?

The canid fox’s average size is around ten inches tall, with a body length of roughly 18 inches and weight around 8 pounds. This average accounts for some of the most common fox species, but each species has its own average.

The height, body length, tail length, and weight are important considerations when factoring in the average size of every fox species. Some species, such as the red fox and the bat-eared fox, have a similar appearance. Identifying the physical size differences can help distinguish the species from each other.

The Average Size of a Red Fox

The red fox is the largest fox, with an average size varying between ten and fifteen pounds. According to Encyclopedia Britannica, a wild Australian fox reached over thirty pounds. Thirty pounds is the largest ever recorded weight for any fox species.

The red fox stands between fourteen and twenty inches tall at shoulder height.

The Average Size of a Gray Fox

The gray fox is the second-largest fox species. It weighs between seven and thirteen pounds and is fifteen inches tall.

The gray fox has a long bushy tail between seven and fifteen inches, with a body between twenty to thirty inches. This means the long length of its tail is equal to half its body size. Its tail length makes the gray fox one of the longest fox species, despite being the same weight as the bat-eared, arctic, and red fox.

The Average Size of an Arctic Fox

The arctic fox weighs between six and seventeen pounds, with a torso to head length of twenty to twenty-four inches. Arctic foxes can be smaller or larger than the average red fox, depending on gender and genetics. The arctic fox’s size is an evolutionary adaptation that the arctic fox uptook for survival.

The Average Size of a Fennec Fox

According to National Geographic, the fennec fox is the smallest living fox. The fennec fox weighs three pounds and will grow no larger than a housecat.

At most, the fennec fox will reach twelve inches shoulder height and an overall length of twenty-eight inches, including its tail. The tiny fennec fox is only a fraction of the red fox’s size.

How Much Do Foxes Weigh?

The red fox weighs an average of thirteen pounds, which is a good average for most foxes aside from the fennec. The small fennec fox is tiny, weighing only an average of two or three pounds.

How Big Are Male VS Female Foxes?

Females (vixens) are smaller than males, although some can be the same size or larger. Generally, the only time a vixen is larger than a male is when she has better access to food, but genetics and early development can significantly influence her size.

How Big Are Fox Kits And Juvenile Foxes?

Baby fox kits and juvenile foxes are similar to kittens when they are born and growing. Small dog breed puppies are another great example. In addition to their initial size at birth, small breed puppies and kittens have a similar growth rate.

Large and medium dog breeds are typically born larger, and they grow quicker than a fox kit does.

Each of the three to five fox kits born by the vixen weighs around only 50 and 100 grams at birth. They are roughly 1.5 inches long with a tail of barely under 2.5 inches. The newborn size of a fox is around the same size as a newborn kitten.

Fox kits gain weight slowly as they nurse on their vixen mother and receive regurgitated meat. They should receive at least 30 grams of milk / 100 grams of meat. The mother will feed her kits while slowly teaching them how to hunt and other independence techniques.

By six weeks old, the juvenile fox weighs roughly 2.5 pounds. It is around the size of a small puppy. The juvenile fox must abide by a strict dietary intake of their mother’s milk and eat regurgitated solid foods to gain adequate weight. Some foxes gain weight quicker than others.

The fox will reach its adult size at around four and a half months old. From there, it will continue its long growth process to fill into its adult weight.

How Do Foxes Compare To Other Animals?

Foxes are smaller than dogs and larger than cats. Red foxes are the same size as medium dogs. Their body shape and genetics are similar to dogs, and they are also a part of the canid family.

Most fox species are slightly larger than cats. However, some species, such as the fennec fox, barely outgrow the size of a domestic cat. They are more easily compared to smaller dogs, such as lap dogs. However, their light and agile bodies make them more limber, like cats.

Some might mistake a fox for a coyote, but coyotes are generally much larger than red foxes.