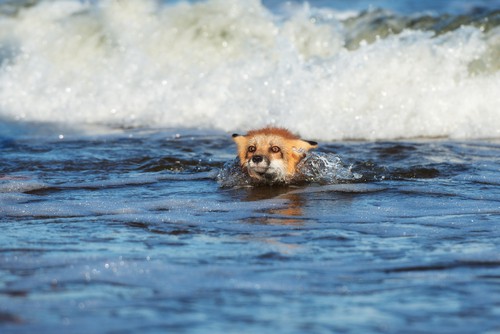 Red foxes know how to swim. Red foxes are even considered good swimmers. However, the red fox does not frequently use their swimming skills, which is why they swim slowly. The red fox avoids the water whenever possible unless it is to travel or for one of their many survival reasons.

The remainder of the article will discuss the red fox’s swimming skills, why foxes swim, and how fast these small canines are at swimming.

All foxes are born with the ability to swim, but they don’t do it very often. Red foxes are happy to use water bodies for biological needs, but they avoid swimming whenever possible.

In cold environments or areas where they get cold weather regularly, foxes avoid water, so they do not get hypothermia.

Red foxes do not like water. Despite being a canine, the red foxes’ ability to swim has been compared to a cat. They know how to swim, and they will do so if necessary. However, they will avoid swimming at all costs.

Foxes are good swimmers who are born with an instinct to swim. According to All Things Foxes, since the red fox is a canine, it has similar swimming capabilities to dogs. They use the signature ‘doggy paddle,’ although they are much slower than dogs.

In addition to being a good swimmer, the red fox is also a stealthy swimmer. The red fox is much slower than most animals when swimming. However, it can swim long distances of up to two kilometers in one trip since it can carefully conserve its energy. Plus, its small size helps it go unnoticed.

Why Would A Red Fox Swim?

Foxes are canines that swim to fulfill biological needs like traveling and hunting. They avoid water when possible but use it to travel across banks, escape predators, and track prey. There are many other reasons that foxes swim, like staying cool and more.

The red fox is intelligent, and despite their high skill, they will not swim unless they have a particular reason.

As opportunistic hunters, the red fox will swim across riverbanks to track prey that it spots. It does not matter the size of the animal. Red foxes are willing to swim a long distance to cross a bank to track their prey.

Believe it or not, the red fox’s slow swimming speed is a major benefit. Even though it means it will take them a long time to get there, their journey does not draw attention. Luckily, the fox is small, and their steady speed across the water does not get them noticed as they move toward their opportunistic prey.

Foxes turn to the water bodies like rivers and ponds as a great escape route when predators chase them. According to the Wildlife Rescue League, foxes use their swimming ability to escape predators. This concept is interesting, given the small canine swims much slower than most large predators, like the coyote (and coyotes appear to like water) or mountain lion.

Foxes are not always escaping large predators, though. This small canine often finds itself in trouble as it invades other mammals’ territories on accident while crossing rivers for food. Many of the territories they invade are other foxes, which they are quickly warded away from by their competing fox neighbor.

It is common for red foxes to cool themselves off by swimming in water bodies. Swimming is a good way to lower body temperature for red and gray foxes that live in warm climates. Foxes will wade in the water on high-temperature days in places with hot weather.

Although red foxes prefer to avoid water at all costs, they will use a waterway when it is the only way to travel. The most common reason red foxes travel in water by swimming is to cross the banks of various water bodies.

Some foxes divide territory by rivers, given they prefer not to travel through water. However, other foxes roam territory across several banks. If a red fox secures multiple banks’ worth of territory, they will cross the area to roam and maintain ownership of the land.

How Fast Can Foxes Swim?

Red foxes are slow swimmers that can only swim two or three miles per hour. People compare red foxes to felines instead of canines, meaning they can swim but do not want to. Compared to the fox’s running speed, this is significantly slower. It is also much slower than any other wild canine. Therefore, that means that nearly any predator chasing them could catch them!

Can Foxes Dive and Swim Underwater?

Currently, the scientific consensus is that foxes cannot dive or swim underwater. So far, no one has ever captured a fox diving underwater. Therefore, further exploration of foxes diving is an ongoing debate.

When red foxes (and all other fox species) swim in the river or other water bodies, red foxes will keep their heads above water. They are great swimmers because of their precise posture. The foxes doggy paddle with their heads held straight up.

Red foxes and gray foxes are likely to swim. These foxes typically live in environments that are warm enough for swimming without endangering themselves.