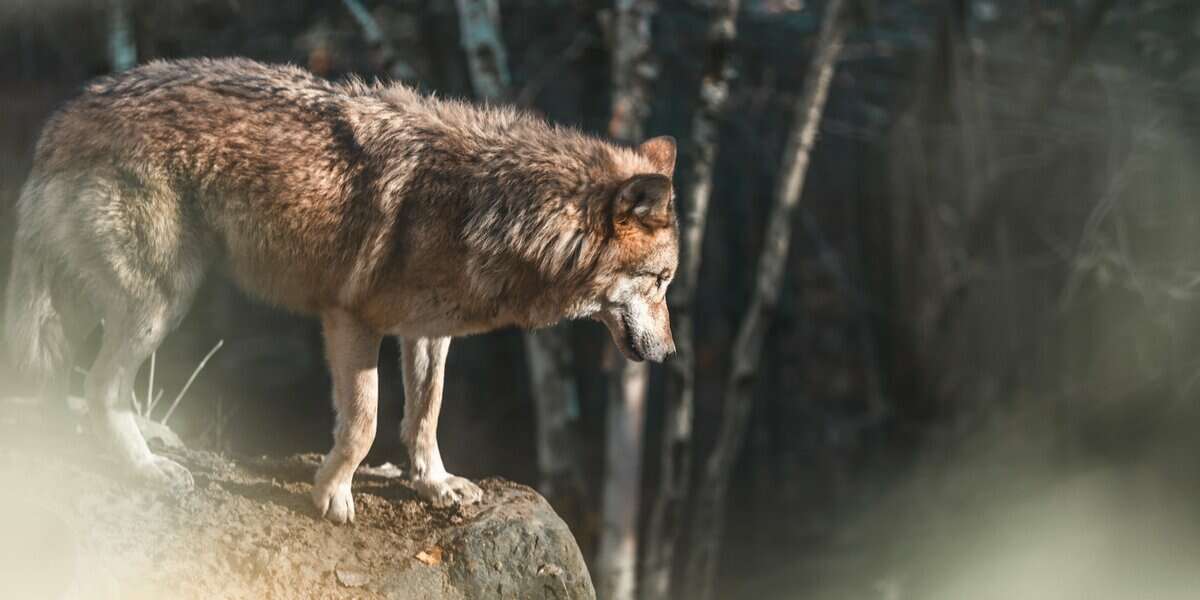 Climbing or scansorial animals need to defy gravity, maintain balance, and overcome obstacles in moving up steep mountain slopes or round, large branches of a tree.

Mammals that are well-adapted to climbing usually have short limbs, small body mass, interlocking claws, and grasping hands, feet, or a tail  – all of which a red wolf doesn’t have and are therefore not adept at climbing.

Let’s take a look at what red wolves would do if their prey were to climb up a tree or if they were to jump over a fence during a pursuit.

Are Red Wolves Good At Climbing?

No, red wolves and wolves, in general, are not good at climbing.

They may be able to scale steep rocks or loose surfaces and jump from one platform to another, but they just aren’t built for climbing. As a result, wolves often choose not to climb unless it’s the only option left.

Red wolves prefer to feed on smaller mammals like rabbits, nutria, and rodents that they can hunt alone. Since they’re smaller than their cousins, the gray wolves, they will only aim for larger animals like a white-tailed deer when they’re hunting as a pack.

Nevertheless, wolves prefer to hunt on flat, open fields where they can immediately see their prey as well as any imminent threat to them.

Red wolves compensate for the climbing abilities they lack by being athletic runners and savvy hunters who chase their prey relentlessly throughout 20 miles of their territories – no trees involved, as much as they can help it.

How High Can Red Wolves Climb?

Adult red wolves stand at a height of 2 feet from their shoulders.

Even though gray wolves are larger, red wolves have longer and thinner legs than their cousins. And their lengthy hind legs are the key to how they can climb – somehow.

When the prey they are chasing, unfortunately, climbs up a tree, red wolves have no choice but to scale the tree too – but only if it’s a small one!

Here is a video of a husky climbing a tree. I know it’s a dog, but it gives us an idea of how wolves, their fellow canids, can scale a small tree:

So, although not much of a height, a wolf would only dare to risk their safety if the tree is small, bulky, and has many sturdy branches that they can temporarily perch on while grasping for their prey or gaining access closer to it.

Furthermore, scaling a small tree does not require too much strength or agility, and their hind legs are strong and capable enough to get them through this challenge.

Nope, red wolves would literally just forget about the chase and move on to another food source when their prey climbs a tall tree, especially one with no branches that they can climb back down if they choose to climb.

Wolves can’t straight up climb a tree trunk, so unless there are fallen branches on the ground or leaning branches on the tree that they can use as a ladder, they won’t even think of attempting to climb.

What Do Red Wolves Do When Their Prey Escapes Up A Tall Tree?

As wolves can’t climb trees that are too high for them, they sometimes choose to wait for their prey to come back down.

A hungry wolf would be patient enough to wait for several hours, especially during winter when most animals are hibernating, and prey is scarce.

Furthermore, a wolf wouldn’t just sit around and do nothing while waiting. Wolves are resourceful and would find other strategies to reach their prey.

Their hunted prey must stay alert and ensure that wolves can’t access any branch or ladder-like items near their post. Wolves are known to attack their target by surprise, so they might just lurk in the bushes waiting for the perfect moment when their prey thinks the hunt is over.

Red Wolves Can Use Their Hind Legs To Catch Their Prey

Red wolves use their hind legs to support their weight as they stand and jump.

Red Wolves Stand To Reach As Far As They Can

Sometimes, a fruit, bird’s nest, or squirrel would be low enough or stuck in the tree’s lower branches for a wolf to reach and grab it with its mouth while standing on its hind legs.

With 400 to 1,500 pounds of pressure per square inch of bite force, a wolf can instantly snap the neck of its small prey and then pull them out of the branches.

This height would be enough to catch a fleeing animal that’s still a few inches up on the tree trunk or lower branch. And even when their jumps won’t be enough to reach and grab their prey, it could scare them into panicking and eventually run out of places to move or hide.

Wolves could injure themselves when they manage to jump or climb a tree. There might be unstable branches, and their own weight could snap some branches. Their paws also find it hard to balance on the round tree branches.

Most importantly, wolves have trouble climbing back down safely from a tree or a tall height. They have no clinging or clasping ability to grasp the tree’s bark securely, and they might easily slip and fall while on the way down.

However, these intelligent red wolves know the danger behind the trick and rarely use it unless necessary. Perhaps when they have no other means of acquiring their 2 to 5 pounds of daily meat requirements.

Can Red Wolves Climb Fences, Walls, and Other Obstacles?

Here is a video of a wolf climbing its way out of a tall fence:

Moreover, another wolf “jumped” a 13 foot-fence to escape a wildlife sanctuary in Sweden.

Although the sanctuary didn’t release any footage of the actual escape, many experts believe that a wolf is really capable of jumping to these heights.

In addition, wolves can use small bushes or trees to act as steps and increase their climbing height. They are also curious enough to look for holes or lower points in walls and fences that can be more manageable to climb.

What Makes Red Wolves So Bad At Climbing?

There are three main reasons why red wolves are not skilled in climbing:

Red wolves didn’t evolve to include climbing in their skills – and they didn’t have to!

As apex predators, only their fellow canids (gray wolves, coyotes, and fellow red wolves) threaten them, specifically in turf wars. Each of them is more or less equal in their climbing abilities, and they didn’t need to hide out in a tree from one another for safety.

Red wolves have an average length and weight of 4 feet and 80 pounds, equipped with four long, slender limbs that are not ideal for climbing.

Additionally, a red wolf has broad shoulders and a well-developed chest that aren’t present in many tree-climbing animals. The torsos of these animals need to be light enough to allow equal weight distribution throughout the body while climbing.

Wolves don’t have retractable claws like the big cats nor the opposable thumbs that primates have. These specializations allow these mammals to grip and grasp the bark of a tree. Instead, wolves have flat and wide paws with claws and dewclaws that are suitable for digging and running on land where they dominate the food chain.