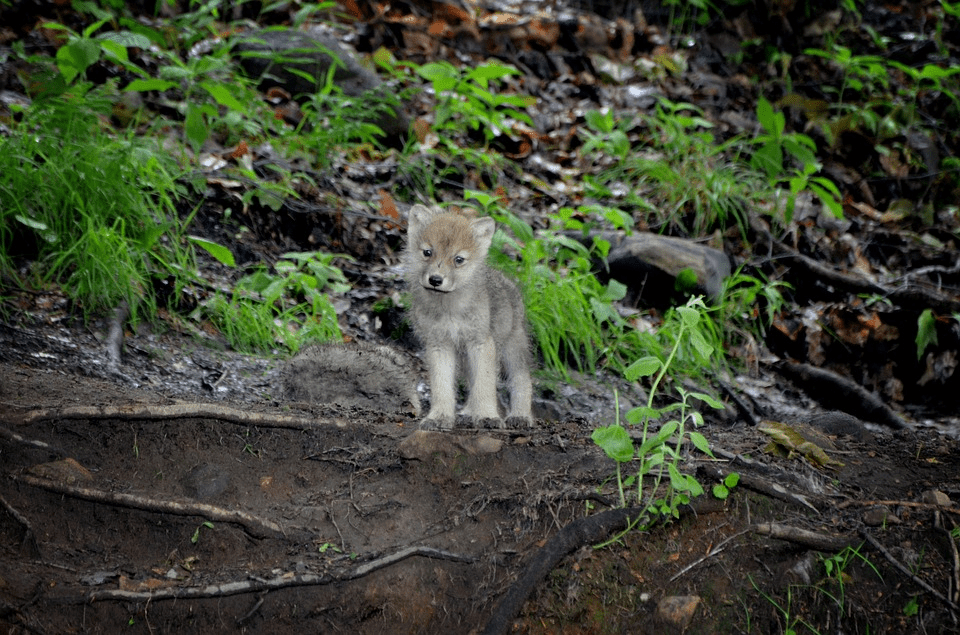 Red wolves are native to the southeastern United States. They are recognizable by their reddish, tawny, majestic coats and by their black-tipped floofy tails.

When red wolf pups are born, they are blind and utterly helpless. To keep them safe and give them the time to grow bigger and stronger, they are kept in dens under the protection of their mothers and the rest of the pack.

What do these dens look like, how many wolves share them, and do wolves make them themselves? Floofmania tells you everything you want to know about red wolf dens and more!

Wolves spend up to 35% of their time traveling, hunting, and foraging for food. Once a year, however, mothers need to settle down to give birth and care for their young. They do this in their dens, a place that is also known as most wolves’ first home.

Red wolves are monogamous and keep the same partners for life. A den is typically shared by a pack of five to eight wolves – the parents and their offspring of different years, with occasional close relatives, too.

Wolves are known for their very close-knit family units. Older siblings often stay to help raise the younger ones until they are old enough to find their mates and territory between 1-3 years of age.

Packs can use the same den for years or move dens each year, depending on the availability of food, the pack’s safety, and other factors. They may also have multiple dens in use simultaneously.

It is uncommon, but there have been reports of dens being used by more than one female simultaneously.

What Do Red Wolves Use Dens For?

Dens are primarily spaces where mothers can give birth safely and where they can raise their young pups who are not yet able to keep up with the rigorous traveling of the group.

They are kept company by others in their pack who regularly bring them food and even take turns babysitting and entertaining the pups.

It takes a pack to raise a wolf pup!

How Much Time Do Red Wolves Spend In Their Dens?

Red wolf pups typically stay inside their dens for a few weeks. At about four weeks, the pups are allowed and even encouraged to leave the den for short periods to begin exploring.

At about eight weeks, the pups are usually fully weaned (no longer reliant on their mother’s milk). They are then taken outside to live in a designated open area or a “rendezvous site,” where they have more freedom to run, eat, play, sleep, and take turns pouncing on each other.

As always, they remain under the watchful eye of at least one of the adult wolves in the pack.

They will remain in this area for a few more weeks until they can begin traveling with the pack.

Red wolf pups explore their habitat for the first time:

Will Red Wolves Use Dens If They Have No Pups?

Floofmania could not find any conclusive study to answer this question, but we surmise that the answer is no. Since dens are primarily safe spaces for the birthing and rearing of pups, we assume that red wolves with no pups simply continue with their traveling lifestyle.

Where Do Red Wolves Make Their Dens?

Red wolves are most comfortable living in forests, wetlands, coastal prairies, and mountains. These habitats provide all the resources the species needs, from food to water.

Within these areas, red wolves make their dens next to sources of water and are often built on elevated areas so wolves can easily spot approaching enemies and potential threats.

However, because they are meant to keep vulnerable mothers and their young safe, dens are often concealed and hidden from predators’ eyes.

Do Red Wolves Dig Their Own Dens?

Being resourceful animals, they may even use abandoned dens from other mammals such as bears, and modify them according to their preference.

Does The Whole Pack Help In Digging The Den?

No, they don’t. Pregnant female wolves usually dig the dens by themselves, often at least three weeks before she knows she will give birth.

The rest of the pack makes it up after the pups are born, though, by regularly bringing the mother and pups food and taking turns watching the younglings so the mother can grab a few hours of shuteye.

Dens may have two or more entrances, identifiable by the large pile of dirt next to them. They typically begin with a long tunnel and end with a chamber where the mother and her young stay.

How Big Is A Red Wolf Den?

At the end of the tunnel lies a chamber about 20 inches (approx. 2 feet) high by 50 inches (approx. 4 feet) wide by 40 (approx. 3 feet) inches deep. In short, on average, it’s not that big! Each pack’s den size is different, some bigger and others smaller.

Regardless of size, dens don’t have linings or beddings – it is typically just a functional hole or set of holes in the ground meant to protect against the weather and predators.

Do Red Wolf Dens Smell Bad? (Are They Dirty?)

If the den has been used for several years or wolf family generations, bones may be scattered around. One extremely old den on Ellesmere Island in Canada had bones inside, some of which were 783 years old!

In general, however, red wolf dens are kept clean by mothers who eat the feces of their pups.

A red wolf father waits for his pups outside the den:

Will Red Wolves Welcome Other Pups Into Their Dens?

Red wolves are highly endangered, and very few are left in the wild in the entire world.

As part of conservation and reintroduction methods, the U.S. Fish and Wildlife Service runs its “Red Wolf Recovery Program.” In the program, a few red wolf pups bred in captivity each year are carefully placed in dens to be raised by wild wolves.

The program has been working excellently, and the pups typically have been embraced and welcomed in by their new parents.

Wildlife experts share their technique: The captive pup litter must be roughly the same age and size as the wild pups’ and be large enough to have one or two babies to “spare” to send out to the wild. It also assumes that the wild litter is small enough (only two to three pups) that the pack can handle an extra mouth or two to feed.

The captive-born pups must be moved within their new foster den quickly since they cannot be without a mother for more than 24 hours.

Once there, the animal experts stimulate the wild pups to urinate on the captive-borns to mark them with the same scent.

When the mother returns, she accepts them as her own, and the scientists can claim that they have successfully added a few more pups to the number of red wolves in the wild!

Each foster pup is one step closer to saving the species.

See some cute red wolf pups being brought up in a zoo: