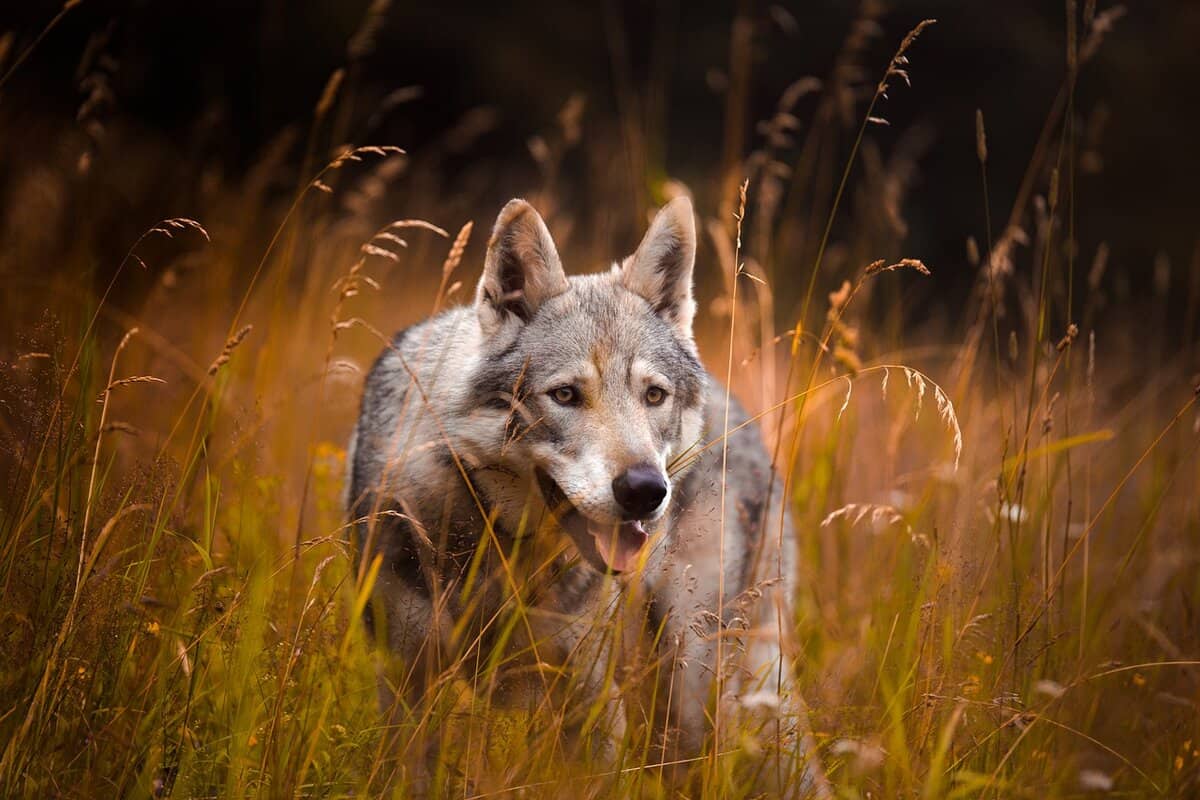 As humans, our hearing ability enables us to recognize and make sense of the different sounds we hear in our environment. And even though our ears can pick up sound vibrations pretty well, a wolf’s sense of hearing is far superior – they can hear howls as far as 10 miles away!

Red wolves (Canis rufus) are one of the two wolf species in the United States. And these wolves are not exempted from having this acute sense of hearing.

Want to know more about these critically endangered wolves’ sense of hearing and how they compare to other species? This article will dive deep into these as well as just how important this ability is to them.

Do Red Wolves Have Good Hearing?

One article has mentioned that a red wolf’s sense of hearing is not as good as its fellow members of the Canidae family.

As for the exact number or frequency difference, however, there is no data.

The lack of information and studies on the species is understandable as biologists focus more on trying to multiply their numbers.

The IUCN or the International Union for Conservation of Nature and Natural Resources has enlisted red wolves as a Critically Endangered species since 1996.

Regardless, these reddish brown and gray-furred mammals are still wolves and therefore have a keen sense of hearing as nocturnal apex predators.

How Far Away Can Red Wolves Detect Sounds?

In general, wolves can hear noises from a closed forest as far as 6 miles away and even from a much further open ground or landscape 10 miles away.

These carnivores can hear frequencies of up to 25,000 Hz, with some experts believing that they have a maximum auditory limit of up to 80,000 Hz!

Hertz (Hz) is, by the way, a measurement of a sound frequency: the higher the frequency, the higher pitched you will hear the sound. As a comparison, humans can hear a max frequency of 20,000 Hz.

Canids, like wolves, are very sensitive to softer sounds between -5 and -15 dB.

Decibels (dB) indicate the intensity or loudness of a sound, with 0 dB being the starting point of what a human ear can faintly perceive.

The negative hearing decibel rating (-5 and -15 dB) for wolves means that humans can no longer hear what their ears can and are, thus, far more sensitive than humans.

Wolves can even tell very similar tones apart, so distinguishing a distant leaf falling from a tree (approximately 0 t0 15 dB) is a piece of cake for them because of their acute sense of hearing.

Can They Hear Your Heartbeat?

Researchers have proven that wolves can hear a smaller animal’s heartbeats even from quite a reasonable distance. This adaptation was perhaps a learned skill from needing to rely on their senses in searching for their prey in the wild.

Now in terms of being able to hear a human heartbeat, they probably are.

But before you think of negative thoughts and scenarios, a red wolf would be more scared of you and will probably run away just by hearing your heartbeat far away.

Despite how stories and media have depicted these animals as “the big bad wolf”, there have been no recorded attacks on humans by red wolves.

Furthermore, the few remaining individuals of the most endangered wolf species only exist in northeastern North Carolina. So unless you’re near the area, you’ll probably keep your heart rate steady and free yourself from worrying if you will ever encounter the elusive red wolf.

How Does The Red Wolf’s Hearing Compare To Other Animals?

The difference in a wolf’s hearing ability is apparent when you compare it to other species.

Aside from not having the same degree of sensitivity as wolves to “too quiet” sounds, humans can only hear a frequency of up to 20,000 Hz, which is quite a bit less than the wolf’s 80,000  Hz.

It’s no surprise, therefore, that some would claim that wolves can hear 20X sharper than humans.

It makes sense, therefore, that your beloved pet shares the same low volume sensitivity with wolves. It also means that they can hear a small animal’s heartbeat and even yours – which they use to empathize with you and make you feel their love and loyalty.

Although similar in appearance, the smaller member of the Canidae family can hear up to 45,000 Hz, with one study claiming up to 80,000 Hz.

Compared to wolves, coyotes can only hear up to a quarter of a mile away yet can identify a mouse underneath 7 inches of snow.

How Do Red Wolves Use Their Hearing?

Wolves use their sense of hearing in hunting for their prey, communicating with other wolves, and listening for potential threats like predators and hunters.

For smaller prey like mice, wolves will intently listen to the squeaks and rustle and then determine the exact location of the mouse under the pile of leaves.

They also use different ranges of howls, barks, snarls, whimpers, and growls to communicate, assert dominance or submission, and warn others of danger. Wolf moms teach their pups how these sounds differ so that they will recognize each once they hear them and respond accordingly to survive in the wild.

Knowing the difference is essential as red wolves are known to defend their territories fiercely and will even fight their fellow wolves to protect their home range.

Red wolves have large, wide, pointy triangular-shaped ears that are gently round on top.

They have longer ears than any other wolf species to aid in keeping them cool during hot summer days. The average length for male red wolves’ ears are 5 inches, while females’ ears are 4.8 inches.

The red wolf’s concave external ears sit erect and forward-oriented on top of an aerodynamic head for enhanced sound detection.

The wolf can then move and rotate each of its ears independently and act as an antenna to pick up the direction where a sound is coming from exactly.

How Important Are The Red Wolf’s Ears To Its Body Language?

Red wolves communicate through various vocal expressions to non-verbal means like scent-marking and body language like tail and ear positioning.

Here are a few scenarios on how a wolf’s ear position can tell you what’s going on:

Besides indicating emotions, ear positions and other non-verbal cues are also important in conveying family roles and rules for the pack.

Wolf pups, for example, exhibit their submission, playfulness, or alertness by cocking their ears accordingly to their tail and posture. It conveys their mood, intent, and their social status altogether.

How Important Is Hearing For Red Wolves?

The red wolf’s acute directional hearing paves the way for long-distance communication between their pack and others.

As wolves, these canids use howling as their primary means of talking, especially when they’re at a distance from one another. Hearing these howls up to 10 miles away and then translating them into fine-tuned messages show their intelligence and unique ability as a species.

Red wolves rely on each other when they are hunting. Through their unique means of communication, they can alert others of possible dangers or even when their prey has changed its course.

These wolves are also successful hunters as they can adapt to their prey while on a chase: they are excellent runners and swimmers that can endure the entirety of a hunt.

While a wolf’s sense of hearing is excellent for picking up sounds, a wolf’s strongest sense is its ability to smell.

Furthermore, a wolf can immediately tell another wolf’s age, gender, dominance and stress levels, reproductive status, and identity from its scent markings alone!

Nevertheless, a wolf’s sensible nose must work together with its sense of hearing to pinpoint the exact location of prey or danger.

As mentioned earlier, wolves can hear noises that are too quiet or soft for a human ear to perceive – so yes, wolves are very sensitive beings to sounds.

Can You Scare Red Wolves Away Using Sounds?

Red wolves are very shy creatures and will avoid humans as much as possible. Therefore, any noise can naturally discourage wolves from coming closer: people yelling, laughing, or talking loud, loud music playing, a car honking, a dog bark, and fireworks all deter red wolves from coming near.

Moreover, many people argue that red wolves threaten their livestock, and a few documented instances exist. For example, wolves preyed on unattended or unhealthy chickens, pigs, and goats when no other food source was available.

Red wolves are only opportunistic predators, so humans can easily take nonlethal precautions to discourage them.

Here are a few sound systems utilized as alarms or scare devices that can further aid in deterring wolves:

Radio Activated Guard system (RAG) and Motion-sensor devices – These alarms use a mix of loud noises such as sirens and human voices to frighten the wolves. However, only a wolf wearing a tracked collar can activate these systems.

Hazing and “Less than lethal Ammunition” – Paintballs, beanbags, cracker shells, or rubber bullet ammunition are loud when fired and can cause temporary pain to wolves to hopefully stop them from coming near livestock. However, it would be best to be cautious in using these devices, and you’ll need to coordinate with authorities when using them.