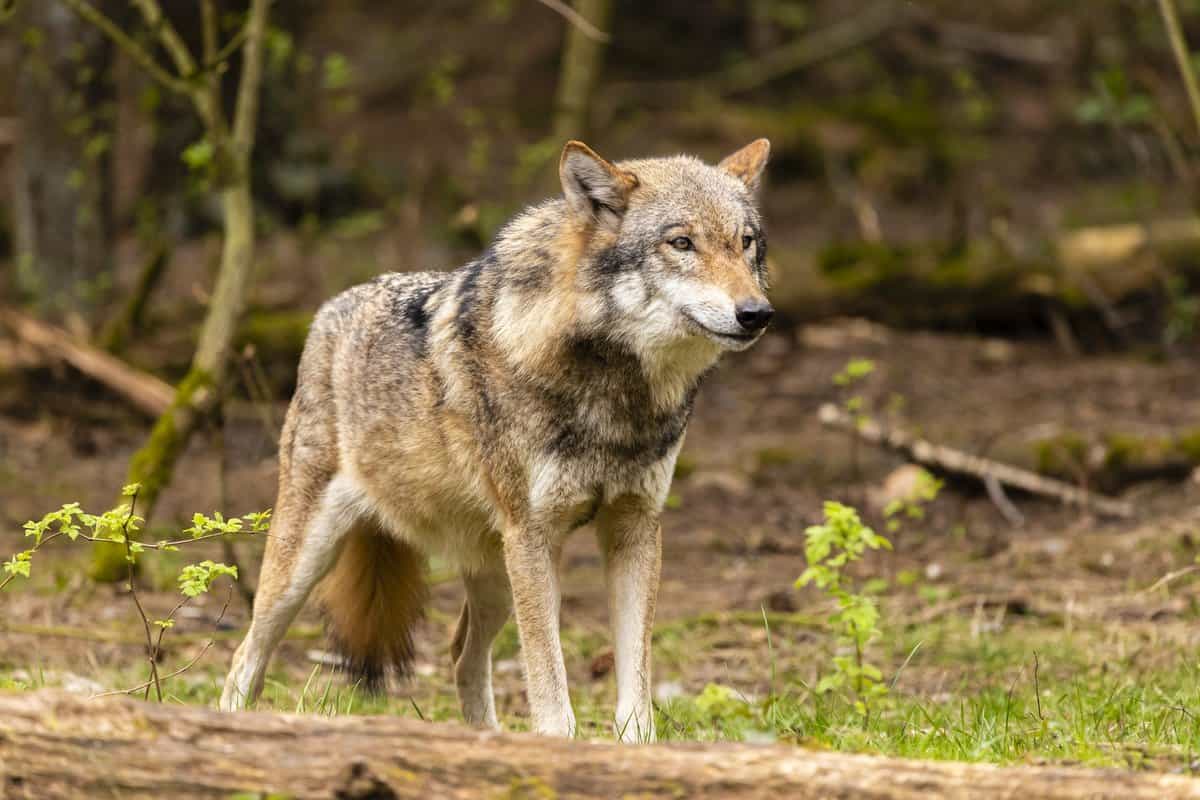 A red wolf has gray and black-colored fur intermixed with buff red tones on its head, legs, and sides. Its ears are the longest among other wolves, and the red wolf also has a long, black-tipped tail.

Moreover, red wolves come in the middle of gray wolves and coyotes when it comes to size.

This article will present and discuss the sizes of red wolves as they grow and mature and how their measurements compare to other wolves and mammals.

How Big Is A Full Grown Red Wolf? (And How Much Does It Weigh?)

The average full-grown adult red wolf measures four feet long from its nose to the tip of its tail.

The wolf also stands 26 inches or 2 feet tall from its shoulders to its feet.

An adult red wolf can weigh anywhere between 45 to 80 pounds, with males generally being heavier than females.

Some would even compare red wolves to the German Shepherds we have in our homes; they are actually similar in size!

But we’ll get more into that in a while.

What’s The Largest A Red Wolf Can Get?

A few resources say that a red wolf can weigh as much as 90 pounds and have a length of up to 5.5 feet from head to tail.

This 10-pound increase from a red wolf’s average weight can be because of how a wolf feasts when they catch a large prey or a food source is abundant in the area.

Red wolves can normally survive on two pounds of meat a day, but hunting is hard and sometimes unsuccessful, so they can go for days and even weeks without eating.

Thus, when the opportunity arises, a mature wolf can consume up to 22.5 pounds of food in one feasting!

Moreover, wolves can return to carcasses or even bury their food for the next time they need it – and they amazingly remember the locations of their caches!

Yes, red wolf males are generally bigger than females by about 10%.

Male red wolves can weigh 50 to 85 pounds, while females only weigh 40 to 75 pounds. However, both the sexes could grow 4.5 to 5.5 feet in length and have an average shoulder height of 2 feet.

Furthermore, male and female red wolves will typically pair-bond with each other for the rest of their lives. And they are great, caring parents too!

When Are Red Wolves Fully Grown?

A red wolf reaches its full adult size at one year old when the epiphyseal cartilages (or growth plates) in its long bones close off, thus ending the wolf’s skeletal growth.

Wolves during this age will also start showing their social statuses by displaying submissive or dominant behaviors.

At 22 months old, red wolves would usually reach sexual maturity. However, some wolves can take up to 36 months to mature, while others will only take ten months.

During this time, red wolves may leave their packs to search for mates to form their own families. These wolves are also called dispersers. They spend the entire winter searching for their future mate.

How Big Are Red Wolf Pups?

Red wolf pups or cubs are usually born weighing about a pound.

Red wolf cubs are blind, deaf, and have no teeth at birth and their mothers stay close to them to regulate their body temperatures and keep them fed and warm.

How Big Is A Juvenile Red Wolf?

At six weeks old, red wolf pups weighing 20 to 30 pounds start to distance themselves from their dens. They can now follow adults on short hunting trips to practice and perfect their food hunting skills.

Their bodies will begin to conform to adult forms, with their adult guard hair becoming apparent on their bodies. Their blue puppy eyes will now change to the infamous yellow-gold color of adult wolves’ eyes.

Over the next three months, juvenile wolves will experience a period of rapid growth where they will gain as much as 1.3 pounds per week.

Wolves will then undergo a period of slow growth until they reach sexual maturity. Male juveniles will gain approximately 0.4 pounds per week, while females will only add up to 0.07 pounds per week to their weight.

How Big Are Red Wolves Compared To Other Wolves?

Wolf taxonomy can be a messy topic to discuss and determine; most scientists share the same sentiment, so don’t worry.

There are also many subspecies listed under gray wolves, but only five of them are recognizable in North America:

Here is a table summarizing these wolves’ average measurements:

How Big Are Red Wolves Compared To Other Animals?

Let’s see how red wolves’ measurements fare with other mammals:

Coyotes are smaller, lighter, and shorter than red wolves.

In comparison, a red wolf’s muzzle is also shorter and thicker. Conversely, coyotes have longer and narrower muzzles than most other canines of their size.

However, some red wolves, especially young juveniles, are hard to distinguish from afar. As a result, they’re mistakenly getting hunted for being thought of as coyotes.

It could also be because they have similar reddish-brown coat colors, though the red wolves’ legs are more likely white, while their underbellies are cream-colored.

Dogs are actually wolves that humans domesticated more than 30,000 years ago – their scientific name tells that story too.

Since then, a multitude of dog breeds has sprouted from all over the world!

Here, we will take a look at three famous breeds:

Great Danes are among the world’s largest dogs. In fact, the Guinness World Record holder of the tallest dog in the world is a brown and gray Great Dane named Zeus, with 3.5 feet of standing height.

So these giants weigh much more than red wolves, and Great Danes also have longer limbs than them.

Siberian Huskies are pretty similar in appearance to wolves. However, they seem to have evolutionary regressed when it comes to their size.

Huskies weigh slightly less than red wolves and stand shorter on their paws than them.

German Shepherds are big, loyal working dogs. They will often work as police and guard dogs.

Furthermore, they are similar in size to red wolves! The two have the same shoulder height, and their weights are within each other’s range.

Bobcats are formidable representatives of the Felidae family. Moreover, these fierce predators’ sizes come shy in contrast to canines.

They only weigh less than half of a red wolf’s average weight. Bobcats are also shorter in length and height in comparison to red wolves.