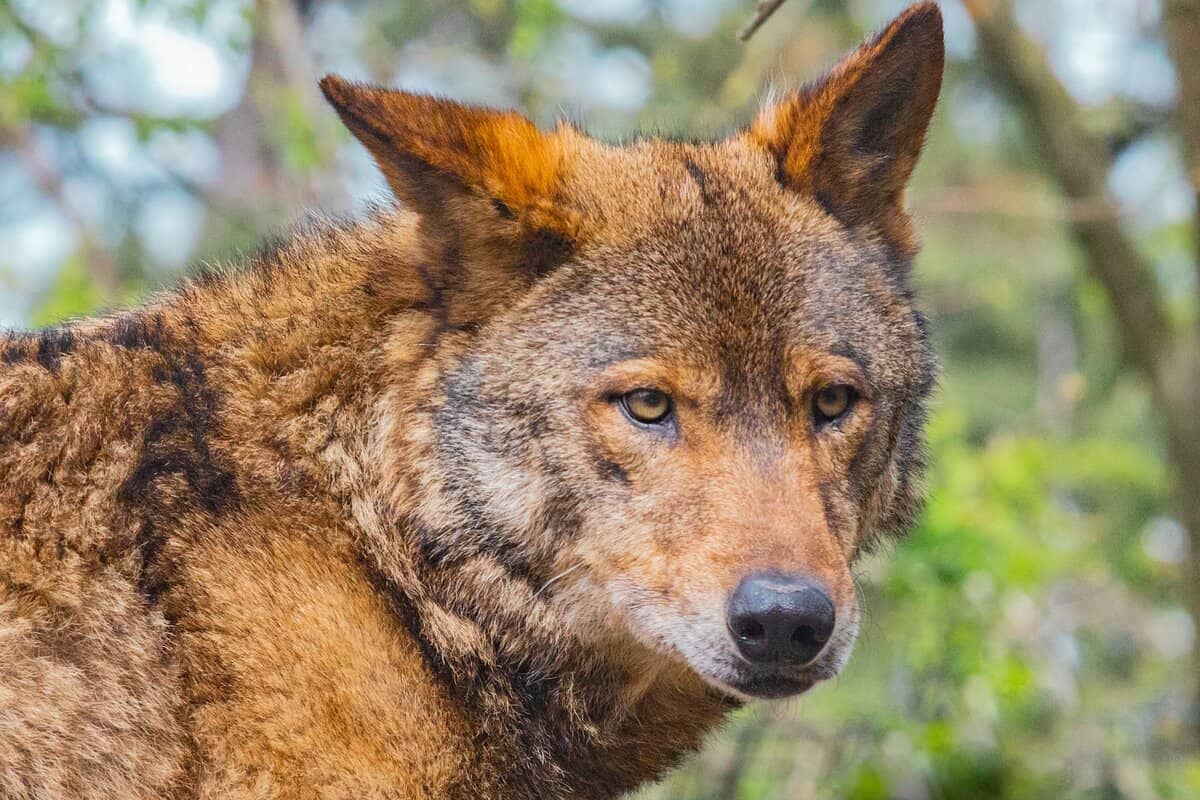 Red wolves are considered one of the most endangered species of canine, and it is native to the southeastern United States. At the moment, wild red wolves can only be found in the Alligator River National Wildlife Refuge in North Carolina.

Their most noticeable feature is their reddish, tawny, and majestic coats. They also have a slender appearance with long, thin legs. Let’s learn more about the features of the critically endangered members of this majestic family!

What Kind Of Animal Is A Red Wolf?

Red wolves are considered the most critically endangered members of the large canines and they are cousins of gray wolves.

Like all wolves, the red wolf is a highly social animal that forms packs, consisting of the parent and their offspring. In addition, they are monogamous animals and will only create a mate bond with a single partner.

Generally, they have cinnamon-like, tawny, black or gray fur mixed with a distinctive color red, specifically on the back of their ears, legs, and sides. Their backs usually have a darker color. They also have a long snout and black-tipped tails.

What Family Are Red Wolves In?

Red wolves belong to the Canidae family, also referred to as canine or canid. This family includes foxes, jackals, wolves, and other dog family members.

Canines usually have long legs, bushy tails, and pointed ears. They are intelligent animals known for their endurance and patience rather than speed. They can pursue their prey over long distances until the prey gets tired.

The scientific name of the red wolf is Canis rufus.

The genus Canis are distinctive members of canines that are known for their moderate to large size, well-developed skulls, and long legs. On the other hand, rufus has a Latin origin which means red.

Is The Red Wolf A Carnivore or An Omnivore?

Red wolves are mainly carnivores. Their diet consists of the following:

However, their diet will vary depending on food availability. They will adjust their diet and eat insects and berries if food is scarce, so you might call them opportunistic omnivores.

Red wolves need to eat two to five pounds (1 to 2.5 kg) of food per day. They are known to be very persistent when hunting and may travel up to 20 miles within their territory to hunt their prey.

Yes, red wolves are apex predators. They don’t have natural predators and are not preyed upon by other animals.

These endangered canines reign supreme and are considered the top food chain predator in several biomes, including forests, swamps, and coastal prairies.

The decline in the number of these wolves is not due to predation. Instead, it is because of poaching, loss of habitats, and competition with other apex predators such as coyotes, gray wolves, and grizzly bears.

Yes. Like all other apex predators, red wolves are considered keystone species. They help define the ecosystem, and the population of other species greatly depends on them.

Without them, the ecosystem would drastically change as they hold together the relationships of different animals in the area. The decrease in their number has a negative impact on the environment.

They are considered vital for a healthy and diverse ecosystem because they restore the balance in damaged wild places.

One of the most notable contributions of red wolves is the consumption of sick or diseased animals, reducing the spread of various diseases, and keeping the ecosystem healthy.

Yes. There are approximately a total of 243 red wolves as of July 2022. The decrease in their population started due to the intensive predator control programs in the early 1960 and habitat loss.

In 1973, they were declared an endangered species, so wildlife rehabilitators tried to capture and relocate them for captive breeding.

They are considered a dying breed and actually went extinct in the wild in the 1980s. The remaining living red wolves are bred in zoos in an attempt to conserve them.

These restoration efforts bear fruits as conservationists successfully rehabilitate their population and are able to set free pairs of red wolves again in the wild.

What’s The Difference between a Red Wolf and Other Canines?

Red wolves share a lot of similar features, including behavioral and physical characteristics with other wolves and canines. This includes forming packs, finding mates, using howls to communicate, and being highly social animals.

Differentiating red wolves from other wolves might be challenging, but here are some of the major points to determine the differences between the red wolf from other large canines:

Both Mexican gray wolves (Canis lupus baileyi) and red wolves are unique, rare, and endangered wolf species. The presence of these animals today results from extensive efforts to save them at the brink of extinction by protecting them under the Endangered Species Act.

Mexican gray wolf is the smallest subspecies of the gray wolf, while the red wolf is a legitimate separate species from them. The distinction between the two rare wolves is tricky because of their similar size, weight, and rusty-colored coats.

It is important to take note that the Mexican gray wolves have a darker, grizzled coloration compared to the distinctive red-tinted fur of red wolves. Their ears are also more rounded compared to the pointed ears of the red wolves.

The Eastern wolf (Canis lycaon) and red wolf are – according to some – both hybrids of coyotes and gray wolves. However, it is still challenging to define the precise variation among these species and more evidence is still needed to prove this claim. Given this, they are still considered to be unique and valid wolf species.

Differentiating the two is easier since eastern wolves look more similar to gray wolves with darker gray to black coats compared to the cinnamon-colored coats of red wolves.

They also don’t have a hint of rusty-red color in their fur compared to the dignified scarlet coats of red wolves.

Jackals (Canis aureus) are one of the canines that could potentially be confused with red wolves. It is important to note, however, that the two species live on different continents since jackals belong to Africa. This makes it a little easier for most to distinguish what they’re seeing in the wild!

The jackal is also distinguishable from red wolves as it is comparatively smaller.

The main difference to check out is their light gray to white stripes from elbow to hip and their backs. They can also have a golden or brownish color but with no trace of a red tint in their fur. Their face shape is also more similar to foxes than wolves.

Gray wolves (Canis lupus) have a more distinct and thick fur compared to red wolves. Although gray is the most dominant color for these wolves, pure white or black variations also exist.

On the other hand, red wolves have a trace of red color in their fur. Grey wolves are comparatively larger and heavier than red wolves.

Coyotes (Canis latrans) are species of canines that are common targets for hunters. Distinguishing between the coyotes and red wolves is necessary because mistaking, and thereby hunting an endangered animal instead of a common one is against the law and crucially dangerous to the environment.

It is important to note that coyotes are smaller, shorter, and lighter than adult red wolves. Coyotes also have darker coats and pointed muzzles.

Red wolves are not ‘pure’ wolves but they are still considered unique and true species. Some even claim that they result from the hybridization between coyotes and gray wolves, making the gray wolf the only true wolf species in North America. However, this matter is still under discussion.

The theory that red wolves are more related to coyotes may become crucial for this species as they may lose their conservation status because the law does not cover protections for hybrids.

While the controversy is still being studied, red wolves remain as a unique designated species and will retain their critically endangered status.

What Ancestor Did The Red Wolf Evolve From?

The red wolf’s ancestors are related to both the coyote and the gray wolf; however, red wolves have a higher percentage of coyote ancestry in their genes than the grey wolf has.

Some argue that they should be considered coyotes or gray wolf subspecies instead of a unique species, but this is not further supported because of the distinct and unique characteristics of red wolves that separate them from the two.

The closest relatives of red wolves are gray wolves and coyotes. It is important to know their distinctive characteristics to efficiently identify an encounter in the wild. Here are some of the major differences between the three related species: