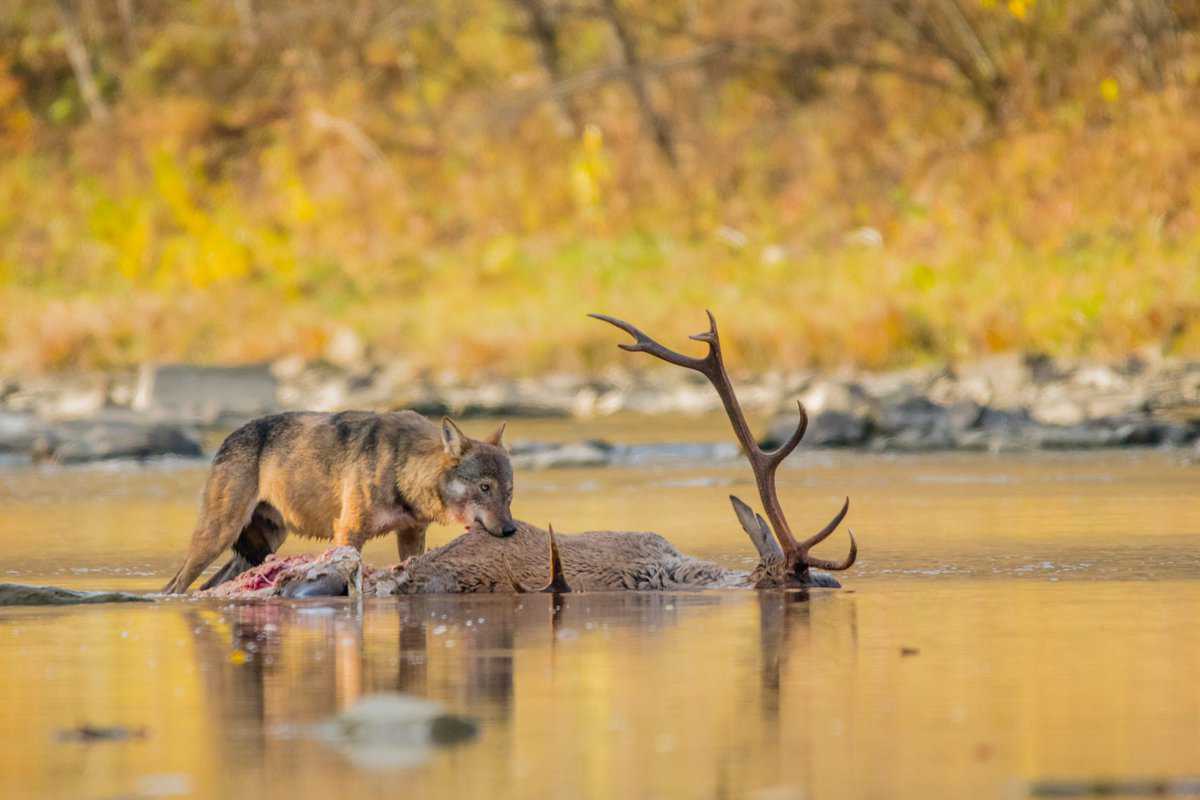 The rare and mysterious red wolf (Canis rufus) is a close cousin of the more popular species of the canine family found in North America – the grey wolf (Canis lupus). We often see footage of these impressive animals traveling many miles a day on land to hunt.

But how strong are they when it comes to traveling in water? These highly intelligent, adaptable and athletic animals might be more at home in the water than we think!

Let us take a look at the red wolf’s swimming behavior and relationship with water.

Wolves, in general, are strong swimmers, able to go long distances and traverse even rough waters. The ability to swim is developed as an adaptation to survive in their habitat.

The red wolf, in particular, is described as a strong and tireless swimmer. The narrow chest acts like a prow of a boat that cuts through the water when they swim. They have long powerful legs that provide the perfect balance to their lean and lithe body. They have high endurance and are built for distance swimming.

Red wolves in the wild are currently found in a North Carolina wildlife refuge in the Albemarle Peninsula, a land formation surrounded by rivers and brackish water.  The species is known to find habitats in forested, bushland areas, and coastal locations which may be swampy areas or marshlands.

Their proximity to water or wet habitats is an affirmation of their skill in navigating and traveling in water.

Why Do Red Wolves Swim?

Red wolves swim primarily to get across to other land masses where they will find their next meal.

Red wolf pack territories are estimated to range between 38 to 67 square miles. They are said to travel about 20 miles daily in search of food.

Their diet consists of small mammals like raccoons, marsh rabbits, and nutria, and larger prey like white-tailed deer. Fish and other water-based prey are not in their diet, so they do not really go into the water to hunt.

Red wolves who have not yet found a mate and settled down with a pack may also travel much longer distances to find their own territory.

In a study of the red wolf hybrids located in Louisiana, a lone male wolf hybrid was tracked swimming across intercoastal waterways. He was also tracked jumping on shoreline structures to explore the area, demonstrating agility and confidence in crossing bodies of water as part of their daily movements.

How Fast and Far Can A Red Wolf Swim?

There are no records of red wolf swim speeds, although wolves, in general, are said to swim at average speeds of three to five miles per hour. The bigger the animal, the slower it would be. A slim or narrow body, like the red wolf, can probably glide faster through water than a more muscular grey wolf.

Grey wolves are bigger than their red cousin, weighing about 60 to 145 lbs, versus red wolves’ weight of 45 to 80 lbs.  They are also reported to have webbed feet that are helpful not just as ‘snow shoes’ during winter, but also as paddles for swimming. Red wolves on the other hand have disproportionately large feet in addition to webbed, very flexible toes, which serve as effective paddles as well!

Another North American wolf species in the coastal areas of Canada, called Sea Wolves, actually spend more time in the water and subsist on an 80% seafood diet. They are about 20% smaller than the grey wolf but are such excellent swimmers that they have been recorded crossing 7.5 miles of water in one trip.

The red wolf is closer to the sea wolf in terms of body size and most likely in ability in the water as well.

Are Some Red Wolves Scared Of Water?

This is unlikely unless the red wolf is sick. Their daily survival activities require travelling across large areas. Living in habitats surrounded by water means there is always the need to cross bodies of water both shallow and deep.

There is limited information on this. Wolves that are recorded hunting prey in the water are usually just catching fish near the shore so they are just wading.

Nonetheless, wolves have shown themselves to be very intelligent and very adaptable. If diving underwater for prey is the only viable way to be able to feed, it is not impossible that they will acquire this skill too.

Here is a video of a captive grey wolf swimming to catch frogs!

Will Red Wolves Go In The Water To Cool Down?

Red wolves do swim and splash in the water to cool off in the summer, especially if a body of water is in proximity. Taking a dip in water to get more comfortable during hot seasons has been observed among wolves in general.

A Youtube search of “wolves cooling down” will show you a few videos of captive wolves playing in ponds or makeshift pools in sanctuaries or conservation centers.

In addition, wild wolves stay in the shade or in their dens during the heat of summer days, opting to hunt at night when it is cooler. They shed their winter coat, and they pant to manage their body temperature. The wolf’s long muzzle and inner nose are very effective cooling systems. They also release heat by sweating through their paw pads.

In the case of the red wolf, their slender body, and their long veiny ears, also serve as temperature regulators that allow heat to dissipate.

Do Red Wolves Use Water To Bathe Themselves?

Wolves do not bathe in water to clean themselves, but rather they shed and rub against trees. They lick, scratch, and shake loose debris and dirt caught in their fur.

Grooming is even performed as a social activity that strengthens family bonds. Pack members will lick and nibble on each other’s coats to clean and remove foreign matter.

Since wolves do not sweat anywhere else but their feet and noses, they do not need to bathe in water to get clean as humans do. Too much exposure to water can dry their skin.

In the wild, red wolves are said to make their dens along stream banks. Even at a very young age, their offspring are exposed to bodies of water and guided by their pack on how to navigate these safely. Whatever the wolf species, swimming is a survival skill that is actually taught to young pups!

With wolves being very comfortable in the water, it seems natural to expect their young to enjoy playing in it too. In fact, water to wade and play in are part of the habitat built for captive red wolves, to ensure enrichment and stimulation.

Thanks to conservation efforts, we can easily find footage of young wolves in captivity playing in bodies of water or basins of water set out for enrichment.

Eleanor grew up with rottweilers and pit bulls and loved the James Herriot books about animals as a kid. She thinks animals are endlessly fascinating, and that we can learn a lot from them, all creatures great and small.