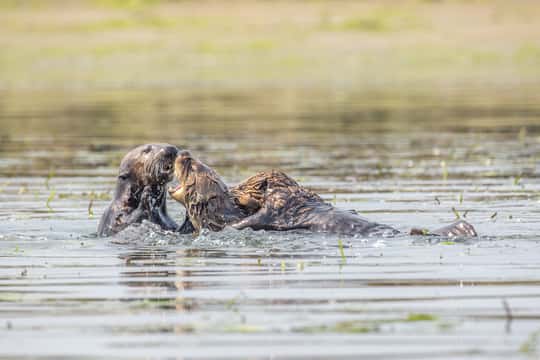 Sea otters are endangered marine animals that reside in the northern Pacific Ocean. A hungry otter can think outside the box when finding food. When hunting, it dives into the water to search for prey using its eyesight, hearing, and sense of smell.

They are considered among the most social animals as they enjoy the company of other otters, especially their young. A lot of bigger predators hunt them, but despite this, they have a variety of defense mechanisms to protect themselves and their loved ones. Let’s explore how these animals react when facing danger!

How Do Sea Otters Fight And Defend Themselves And Their Young?

Sea otters can use their powerful teeth to defend themselves against other sea otters and to ward off predators. Even though adult sea otters are generally not very vocal, they produce a loud snorting noise to alarm other otters when confronted with danger.

With the frigid seas they live in, sea otters must be able to protect themselves. The sea otter must defend itself from several natural predators such as great white sharks, orcas, bald eagles, bears, and coyotes.

In times that sea otters cannot fight back, they can retreat, hide in kelp, or emerge from the water on land to avoid being preyed upon by predators.

Sea otters are not aggressive in nature. Their aggressiveness is triggered only when they are bothered and during mating season (specifically male sea otters).

Sea otters can become aggressive if provoked and necessary, contrary to their sweet, fluffy-faced, and playful appearance. They usually avoid people, dogs, and other animals, but if threatened, they bite.

Despite their cute appearance, sea otters are still wild animals and can be dangerous. Some say that the sea otter’s bite is as hard as a grizzly bear’s and they have strong teeth, so it is best to keep a distance (at least 60 ft.) from sea otters.

When Do Sea Otters Fight?

Occasional fighting occurs when sea otters need to protect their territories. They usually have long patience, but when provoked, they will not hesitate to defend themselves by attacking their opponents.

Sometimes, they fight other predators to keep the resources necessary for their life and reproduction, such as food, shelter, and territory.

Engaging in playful activities such as wrestling contributes to the survival of sea otters. Wrestling helps them perfect their hunting methods and mark their area with their smell.

During the first year of nurturing their pups, mother sea otters use play fighting to train their babies and develop their survival skills.

Play fighting is a tradition not limited to mother-child interaction. These behaviors can develop social relationships in which dominant and submissive otters interact with one another, strengthening social structure among groups.

Since otters can wrestle up to 20 times an hour, it’s safe to say that wrestling is a form of play for them.

Do Sea Otters Fight For Dominance?

Sea otters usually avoid fighting each other. They show no signs of aggressiveness and do not scare away other otters that enter their territories.

However, there are instances where the male sea otters establish territories in female areas and try to mate with any female crossing their boundaries.

Do Sea Otters Fight For Food?

There are few moments when sea otters fight for food as they have little to no competitors for their prey. Even when the resources for food are limited, they specialize or change their diet to adapt to the changing environment.

Sea otters go to the bottom of the ocean to get food. They grab their food with their front paws and bring it to the surface. A sea otter eats while floating in the water.

Male sea otters are aggressive when it comes to mating. Sea otters usually form groups called a raft. There is a separate raft for male and female otters, and they only come together during mating season.

Typically, males would chase, grab hold of a female and bite down on her nose, causing deep scratches and gouges. This will result in wounds, fractures, and can even be seriously dangerous for female sea otters. Male and female whirl in the water until they are done mating, and the male frees her.

Why Do Male Sea Otters Bite The Females’ Noses?

In the wild, it’s actually pretty common to spot female sea otters with scarred noses. Sadly, this is just how reproduction works with these animals.

There are some instances of this happening in the wild. During mating season, male sea otters seek females with ferocity. Despite the fact that they have been captured, female sea otters are determined and struggle to escape.

The males attack the female so forcefully that they hold her head underwater as a means of subduing her. During mating, females have been known to drown.

Thankfully, it’s not at all common!

How Do Sea Otters Fight?

Sea otters mainly fight by biting their opponent. The four lower-jaw incisors of the sea otter are not only used for urchins and crabs but also perfect for cracking up their opponents. In addition, sea otters have excellent vision, hearing, and sense of smell, which helps their survival.

Do Sea Otters Fight Each Other “Seriously”?

Sea otters don’t fight each other seriously. They tend to avoid fighting each other or don’t bother in the presence of other otters. Sea otters tend to gather in groups to rest. Over 1,000 otters have been observed floating together.

Sea otters use seaweed as a raft to keep each other from drifting apart in the ocean. It feels nice to see otters resting together in an orderly fashion.

Do Sea Otters Use Their Arms Much When Fighting?

Sea otters don’t usually use their arms in fighting. They mostly use their strong sharp teeth to defend themselves. In rare cases, they can use their arms to subdue and even drown smaller land animals that try to attack them.

In addition, sea otters can use their paws to hunt prey or open clams and shells by smashing them with their favorite rocks.

Fleeing & Giving Up Food: How Passive Are Sea Otters?

Sea otters usually flee when facing possible dangers and don’t take many risks of competing for food. Their aggressive behavior often shows during mating season and when being provoked. But aside from those instances, they are very passive and elusive animals.

How Do Sea Otter Moms Protect Their Young?

Mother sea otters are known for their bravery when protecting their pups from attackers. As long as a baby otter’s life is in danger, a mother sea otter will do everything to protect her offspring, even putting her life on the line.

We can say that sea otters have some of the most caring mothers of all animals. Not only do sea otter mothers do all the work of raising their pups, but they also give their pups almost all of their attention.

For the first five months of their lives, baby sea otters depend entirely on their mother and siblings for food and care.

For the first three months, a mother sea otter holds her pup on her belly and spends a lot of time grooming it. It’s common for a mother to wrap her pups with kelp strands to keep them from drifting away from her while she dives for food.