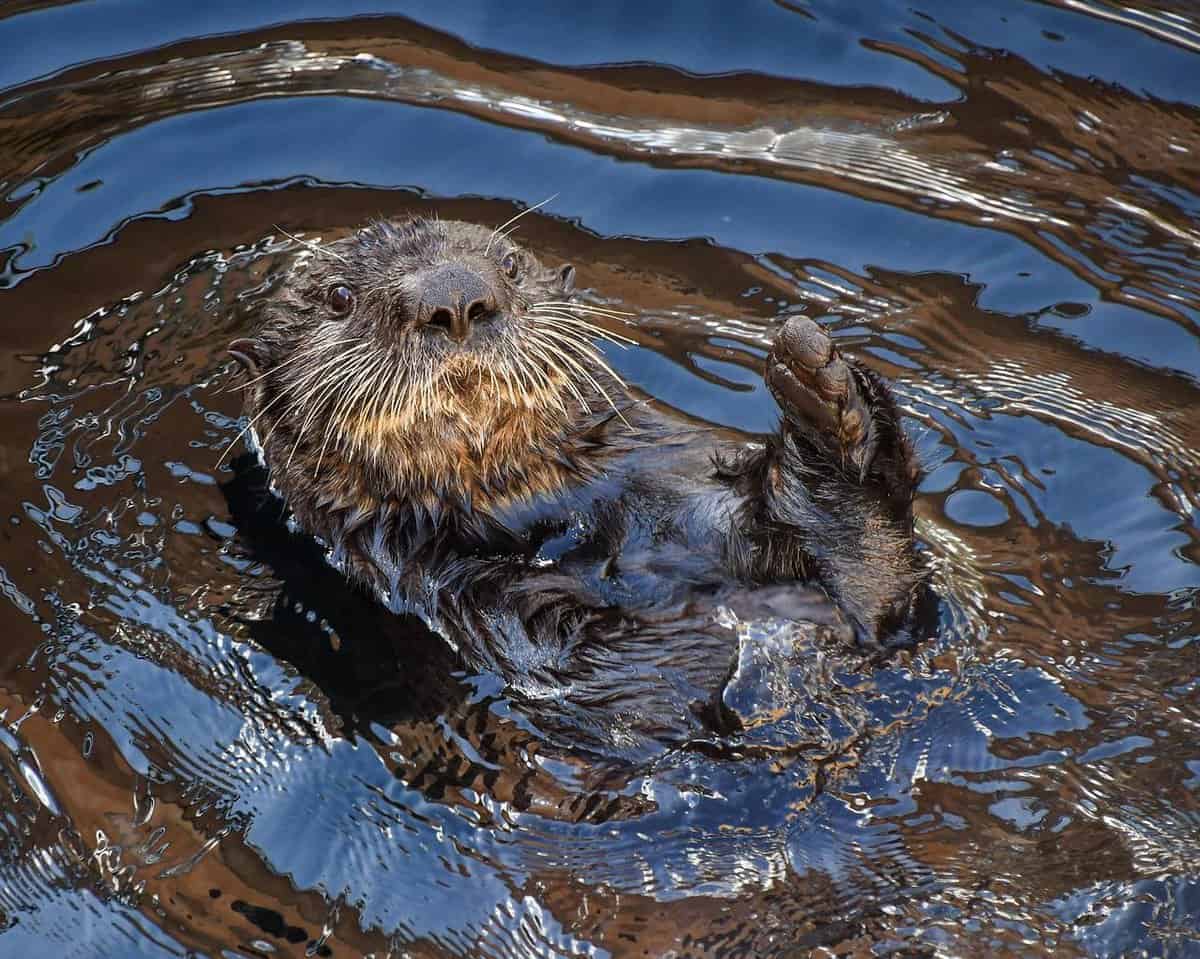 Sea otters are one of the aquatic members of the weasel family. They are highly adapted to their environment, and they’re overall amazing mammals that can spend their entire lives in water and also one of the few that can use tools.

They have a lot of unique features such as webbed hind feet, or flippers, water-repellent fur, built-in skin pockets, sealable nostrils -and ears that help them survive in the waters.

Let’s learn about these features that will help us identify sea otters when we encounter them in the wild!

Where Can Sea Otters Be Found?

Sea otters are found in the offshore giant kelp forest in the coastal waters of the North Pacific, specifically the Pacific coasts of Russia, Alaska, and Central California.

Offshore locations with abundant food and kelp canopy are ideal habitats for sea otters. They usually don’t come ashore and do their daily activities, such as sleeping and resting, in groups known as “rafts” where they float on their backs in the water.

Sandy sea bottoms, rocky shorelines, and coastal wetlands are all common places to find sea otters when exploring the coast. They like to live where the water depths are about 130 feet (40 m), with water temperatures of 35°F to 60°F.

Sea otters are arguably one of the cutest mammals on the planet. Their eyes and ears are almost invisible under their fur, which makes you want to cuddle them (but don’t!) Here is a detailed description of these cute animal’s features and their functions:

Sea otters have black, tough forepaws used for grooming, finding food, and eating. Despite the sea otter’s arms being very short, the forepaws are very nimble and agile; they can use them to rub, twist, and pull objects and foods strongly.

They have retractable claws and tough pads used to grip. Under their arms, you’ll find their pockets, which are small skin flaps that they can use to keep a surprising amount of food and their favorite shell-cracking rock.

The Sea Otter’s Flippers and Tail

The hindlegs of sea otters are webbed and look very similar to seals’ and sea lions’ flippers. The longest final digit makes their swimming easy but walking on the ground difficult.

Sea otters have a flat and rudder-like tail that is strong and muscular, which aids in steering and swimming.

Sea otters have small black eyes and ears hidden in their fur. Their ears and nostrils are well-adapted to a water environment, and they can close them completely when they dive, to keep out the water. They can sense vibrations underwater through their long white whiskers.

The sea otter’s strong sense of smell and hearing are also useful for foraging for food and avoiding predators. When they catch one of their preferred sea-food shells, they’ll use the four incisors in their lower jaw dedicated to open crabs and sea urchins’ tough shells. They have flattened molars to crush and cut foods.

Sea otters have long, sleek, and completely buoyant bodies. The fur of sea otters is so dense that there are over a million hairs per square inch. Their thick, glossy, and fluffy fur is considered the densest among all mammals.

When groomed properly, the outer guard hair has a length of about 1 1/3 inches and lies flat against the body. Another layer of fur, called the undercoat, lies behind the guard hair, which is fully resistant to moisture and stays completely dry.

What Colors Can Sea Otters Be?

The color of sea otters’ underfur ranges from dark brown to black, while their guard hair can be black, brown, or silver. They have a creamy white, large head, chest, and throat with black nostrils, but older sea otters have silver-like heads.

Generally, the older a sea otter is, the more white, or silver its fur becomes. A little like us humans!

How Big Is A Sea Otter?

Sea otters have unique communication methods. They are not very vocal animals, but when they make noise, they convey a specific emotion, instructions, or simply playfulness.

One of the most heard sounds they make in the wild comes from the pups making squeal and scream sounds when they are separated from their mother. Researchers have identified 12 sea otter vocalizations, including whining, whistling, growling, and even snarling.

Sea Otters Float Around On Their Backs In Groups A Lot

Sea otters prefer to rest and sleep in large groups called rafts. The number of animals in a raft can range from a few to over 30 sea otters observed floating together.

Sea otters will form a raft by wrapping themselves in seaweed in order to stay together. They also sometimes hold each other’s paws as they sleep, preventing the danger of drifting apart (this looks absolutely precious). The male and mother otters with pups are separated in their distinct rafts.

Sea otters groom a lot because it is essential for their survival. When their fur is dirty, their dense hairs will clump together, releasing the trapped air that keeps them buoyant and warm. Their fur acts as an insulator, but it won’t work nearly as well with badly conditioned fur.

Sea otters cannot survive if the fur becomes tangled and unable to hold air because they will have a hard time floating, which means that they may drown!

This is why mothers groom their young as soon as they give birth: to help them achieve neat and well-maintained coats to keep afloat in coastal waters.

It’s not just that there are numerous otters out there; they’re everywhere. Sea otters share numerous characteristics with a wide variety of other marine mammals. Let’s take a closer look and compare some of the most commonly confused animals to the North American sea otter.

The sea otter’s close cousin, the river otter is most commonly confused with sea otters. There are, however, notable differences between the two, such as how they swim.

Sea otters float on their backs on the water’s surface while river otters swim belly down, similar to other animals. Another point to consider is that sea otters’ tail is flat and short, while river otters have long and pointed tails.

Instead of fur, seals have blubber which is a thick layer of fat under their skin that helps them keep warm in the freezing water. Sea otters are smaller in size compared to seals.

Like seals, sea lions don’t have the same thick fur but are instead equipped with blubber, a thick isolating layer of fat under their skin.

Minks resemble sea otters because both have fur, cute facial features, and whiskers. But it is important to note that sea otters are significantly bigger (almost twice the length and much heavier) than minks.

While minks often swim and hunt in water, they’re mostly land-dwellers and make their homes in dens or hollow logs.

They have webbed feet that they use for swimming, but their hind feet are not nearly as big and well adapted for swimming as the sea otters’ flippers. Minks also have long, furry tails, unlike the flat tails of sea otters.

Always Be Careful Around Sea Otters

Sea otters can become accustomed to human contact and they can be brave enough to approach people and pets. They find people interesting and want to go near us to observe.

By climbing on kayaks, curious sea otters may try to get closer to humans. Humans and sea otters are equally at risk in situations like these; which is why every effort should be made to discourage the sea otter and avoid physical contact.

Dogs should never be allowed to interact with sea otters. Both dogs and habituated sea otters have the potential to seriously harm each other in “play” or in “aggressive” situations.

Despite their cute, cuddly appearance, sea otters may be dangerous if disturbed or threatened. If they feel in danger, they will bite to defend themselves.

Remember To Keep Your Distance!

Always be alert when you are in places habituated by wildlife. Avoid getting too close to them and making them feel threatened. It is dangerous to get too close to marine life, both to the animal and its young.

In addition, it falls within the definition of marine animal harassment, which is illegal. You’re too close if their behavior changes.

The cuteness of sea otters does not make them any less dangerous than other wild animals. Sea otters may bite hard and have sharp teeth, so keeping at least 60 to 100 feet away (length of two school buses) from them is advisable, whether on land or in water.