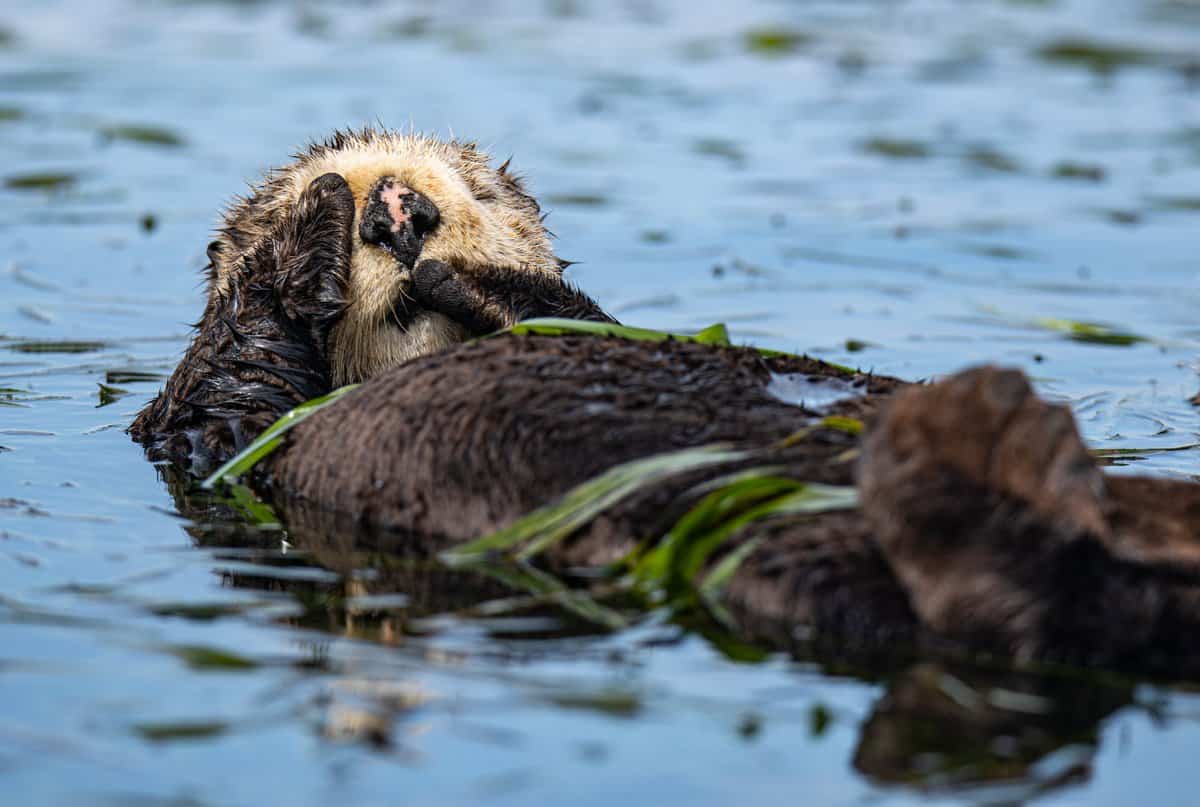 Sleeping and resting is the second-most important daily activity in a sea otter’s life, next to foraging and followed by grooming. Sea otters specifically spend 40 to 49% of their daily lives snoozing off and building up energy so they can feed and groom themselves effectively afterward.

Biologists routinely observe the resting behavior of sea otters in marine facilities. They’ve found that they weren’t completely immobile during sleep. Like sea lions, fur seals, and dolphins, they also move their bodies to adjust their balance and maintain their posture while sleeping.

The sea otters also occasionally rocked on their sides but immediately returned to their positions once their little nostrils touched the water.

Want to learn more about the sleeping behavior of the adorable sea otters? For example, do you want to know whether they really hold each other’s paws and wrap themselves in kelp when they sleep? Then, join Floofmania as we answer the questions surrounding the sea otters’ slumber.

How Do Sea Otters Sleep?

Sea otters form groups of two or more members of the same sex called rafts and sleep close together.

Male rafts are generally larger than females as they attract more members, like independent juveniles and adults that don’t have their own breeding grounds to protect.

And even though sea otters are not migrating animals, they will have to look for new foraging areas when their population expands. Male sea otters will be the first to search and investigate potential hunting grounds so others can follow suit.

Alaskan sea otters are also known to synchronize their sleeping times so that most of them would bob on the water surface together and prevent anybody from drifting apart from the group.

Do Sea Otters Sleep, Floating In The Water?

Yes, sea otters like to sleep while floating on their backs.

They prefer to stay in their location to sleep afloat on their backs after eating their food and grooming themselves after. While hauling on land is also an option, it usually demands less effort and energy to just sleep on the spot!

Sometimes sea otters assume a curled-up position, where they rest their heads on their chins. They then stick their forepaws out to the air or put them on their chests while folding their hindlegs on their bellies to conserve their body heat when it’s cold.

Alternatively, in hot weather, they put their hindlegs, or flippers, in the water to cool themselves down. Their tails also always lie on the water surface to help maintain their balance and posture.

A sea otter will even adorably cover its eyes or rest its forepaws on its eyes sometimes – just look at how cute those little paws are on its face!

While it is a precious sight, some believe that sea otters do this to help them fall asleep. Others say it is just a comfortable position that allows them to rest their forepaws while trying to keep them out of the cold water. Regardless of the actual reason, they’re just irresistibly cute when they do it!

Why Do Sea Otters Hold Hands While Sleeping?

Sea otters sometimes hold each other’s hands (or paws) to prevent them from floating out to sea or drifting too far from their group while sleeping.

Huge ocean waves or strong water currents can unpredictably carry a sleeping sea otter away, so sea otters must stick physically close to each other to maintain the rafts’ integrity and stay safe.

A sea otter holding another otter’s paw is undoubtedly charming to look at or even imagine. Yet experts clarify that they don’t usually do it as much as we’ve thought and hoped for. I know I’m not the only one bummed out by this fact, and sadly stand corrected because I really thought that they routinely held hands as they slept!

Anyway, the scientists’ explanations actually do make sense. Because when we think about it, how can the mere holding of each other’s little forepaws stand against a raging storm at sea? Sure, there may be strength in numbers, but we’re talking about a force of nature here.

Researchers believe that hand or paw holding is a learned behavior in captive or rescued sea otters. They say sea otters in marine facilities often undergo several medical examinations and monitoring procedures, and it is likely that they have been trained or have learned along the way to give out their paws to make the checkups easier to go through each time.

Take, for example, Milo and Tanu here from the Vancouver Aquarium:

Although further studies are needed to confirm their theory, biologists theorize that paw-holding may be a coping mechanism in certain captive sea otters. For example, they may get a sense of their mom’s affection from holding another sea otter’s paw.

Whether this is true or just relatively so, it is still beautiful to think how their stress and feelings of isolation may have dissolved as they get soothed by another otter’s touch or paw.

Why Do Sea Otters Wrap Themselves In Kelp While Sleeping?

While sea otters don’t frequently hold each other’s paws when they sleep, wrapping their bodies in kelp is a must!

Sea otters can remain in place and not float away even if there’s a storm because they wrap themselves in kelp blades or fronds. Kelp is a large brown alga with anchor-like “holdfasts” instead of roots which they use to hold unto the rocky substrate below.

The Giant Kelp is both the largest seaweed and marine alga.  It is also one of the fastest-growing organisms in the world. So sea otters can always depend on kelp to keep them safe from strong water currents and hide them well on the water surface from predators.

How Long Do Sea Otters Sleep?

Sea otters spend an average of 11 hours sleeping and resting each day.

They experience multiple quiet and paradoxical sequences while they sleep.

We call it “quiet sleep” when they lay relatively still in their usual sleeping position for at least 20 seconds. Researchers have observed captive sea otters going into this deep sleep cycle for 24% to 35% of their day.

In contrast, the same otters experienced 9 to 14 episodes of paradoxical sleep that lasted for only 5 to 314 seconds. This sleep cycle is a lot like the Rapid Eye Movement (REM) sleep pattern in terrestrial mammals like humans.

You will know when it is happening in sea otters when you can visibly observe their heads, paws, and even their entire bodies twitch and jerk.

You may also notice their bodies switch to belly-down positions with their heads, paws, and feet eventually submerging in water. They may even remain in this position for as long as a minute before they notice and immediately return to their usual sleeping position!

They’re probably experiencing vivid dreams, like humans, during these instances because, after all, every mammal has the potential to dream.

What Time Of The Day Do Sea Otters Sleep?

Sea otters are diurnal and forage during the day. They go for multiple short dives throughout the day and groom themselves after to get rid of food debris and replace the air bubbles they lost in their fur as they swam. They then usually go to nap at midday which could start and end at 12 to 20:00.

Their main sleeping period occurs at night, usually starting anywhere from 20 to 22:00 and ending at 6 to 9:00 in the morning. Although a few individuals, especially nursing sea otter moms, are more likely to hunt for food for the third time that day around midnight and therefore get less sleep.

Where Do Sea Otters Sleep?

Sea otters prefer to sleep and spend almost their entire lives at sea.

They usually live near the coastlines of the northern Pacific Ocean. They don’t swim too far nor dive too deep from the shore, so they can immediately return to the calm water where they rest after foraging and consume their catch. You’ll likely spot them sleeping on the water surface above kelp forests and rocky reefs.

While most sea otters are almost fully aquatic, some occasionally walk a few feet ashore to rest. In Elkhorn Slough, California, 72 to 149 sea otters hauled out on the beach during nighttime on one occasion.

As long as no humans are around, they sleep closely together to keep themselves warm and dry on land. They sometimes do this when the sea is at its lowest level (low tide), or they’re trying to escape a storm or predator.

While lounging in the sand, sea otters have also been known to adorably groom themselves and sleep on their backs, just like they usually do at sea.

But even though sea otters can sleep on both land and water, they still consider the ocean or the aquatic environment the safer place to sleep, as there are plenty of potential dangers lurking by the seashore.