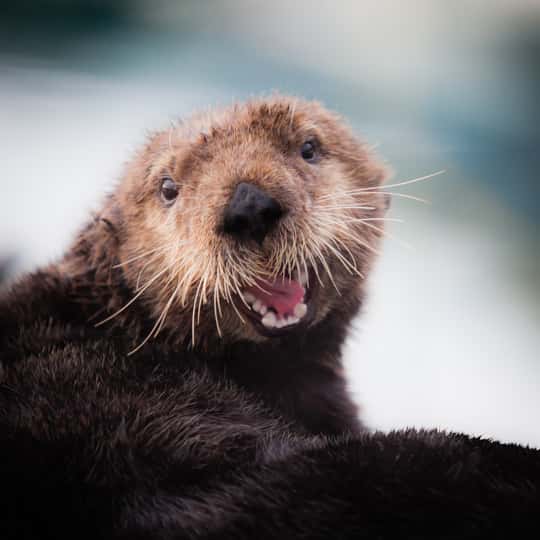 Sea otters are very social creatures, living in same-sex groups on ocean coastlines between California and Alaska. They’re amazing too and have innovative ways to communicate with each other. While not extremely vocal, they do produce sounds to express particular emotions, instructions or to have fun.

These sounds can include things like hissing, cooing, grunting, barking, whistling, whimpering, crying, chirping, and other such noises. While sounds like cooing will often denote contentedness, pups will squeal and scream when separated from their mother.

Sea otters, as with all otters, are vocal. They have a heightened sense of hearing and, therefore, distinct sounds they make to express themselves. They make vocalizations to serve a range of purposes much in the same manner as people do.

We don’t know all the reasons why they make the sounds they do, but we can surmise by observation and subsequent reactions by other sea otters. A simple demonstration of this is when a mother reunites with her baby after it cries, screams and squeals from being without her.

How Do Sea Otters Communicate with One Another?

Sea otters use a variety of methods to communicate with one another. While vocalization is one aspect of this, they also incorporate touch, vision, and smell. To illustrate, males will patrol their territory, chasing intruders and floating on their back while splashing.

They will communicate in a tactile way by using their whiskers, licking, forepaws, facial contact with another sea otter’s body, and, of course, throughout their mating rituals. But the sea otter’s crowning feature is its ability to produce sound.

How Do Sea Otters Produce Sound?

Sea otters produce sound in both water and air using vocal cords. They can produce a variety of sounds that are guttural, nasal, and dental. Sea otters have lungs, which push air through the voice box to produce sound. They can control their mouths, throats, and bellies to intentionally produce distinctive noises.

But, sea otters can also produce sound by using their bodies in the water to make specific splashing sounds. They will also position themselves in such a way as to convey warning or alarm to other sea otters nearby.

Are Only Sea Otter Pups Vocal or Do Adults Also Make Sounds?

Both pups and adults make sounds, are quite loud, and can vocalize for a considerable period of time. But, the purpose of a pup vocalizing is often due to the fact that it’s away from its mother. However, adults will vary their sounds to serve several purposes.

Having said that, pups tend to be more vocal than adults and will whimper, whine and cry at the slightest provocation. Adults are more apt to make noises of being happy and playful. They reserve aggressive or distressed vocalizations for when they feel threatened, trapped or captured.

What Kinds of Sounds Do Sea Otters Make? (And What Do They Mean?)

Researchers and scientists have been able to identify nine to 10 different sounds in sea otters. These include things like barks, whines, yelps, whistles, coos, growls, and others; all of which serve various purposes.

For instance, males will make growling noises and other sounds of aggression to exert dominance in their territory. Females will hiss and bark when threatened, especially if she’s pregnant or protecting her young. Pups will make screaming sounds when away from its mother and cooing sounds when in its mother’s presence.

Females will coo before and after mating but she will be aggressive with growls and snarls when trying to escape from a potential mate. Once she has her young, she’ll hiss, grunt or bark during feeding.

Do Sea Otters Scream or Make Squeals or Squeaky Noises?

Sea otters scream, squeal and make other kinds of squeaky noises. Screaming and squealing come from babies when separated from their mothers. Adult sea otters will also produce their own blood-curdling scream when under stress. However, when females scream for their young, it is different than one made in general distress.

Studies of sea otter acoustics, specifically with their screams, have proved that all had a harmonic structure with the capacity to extend 60 kilohertz. For a basis of comparison, there are radio and wireless frequencies traveling at that wavelength.

This means they can project sound at a far range and for a considerable duration. Estimates place the length between ½ and two seconds. Females can scream in frequencies that range between six and eight kilohertz and pups can reach four to seven kilohertz. Eight kilohertz is the lowest possible range for people to hear each other over the telephone.

But, it’s crucial to understand that you won’t be able to hear the sea otters from the shore alone. You would have to be up close for their noises to be audible. However, to demonstrate how loud babies can be, a study in 1940 couldn’t find a screaming pup with 12-power binoculars.

Sea otters definitely make whistling sounds. While researchers haven’t placed the purpose for whistling, it does seem to have associations with basic socialization. It’s common when sea otters play together. But they will also do this out of frustration or when they experience mild moments of distress.

Snarling and snorting are part of the sea otter’s communication repertoire. This also includes hissing. Sea otters will make such sounds audible when they feel threatened in some way. This often accompanies hunching up their bodies complete with biting and pushing.

But, sometimes they’ll snarl, hiss, or snort out of frustration, annoyance, or because they’re trying to escape a predator. Regardless of the purpose, it will almost always be a negative reaction to something they don’t like or approve of.

Can Sea Otters Bark or Growl?

It isn’t uncommon for sea otters to bark and growl. They use barking or growling much in the same way as they do snarling, snorting, and hissing. This is usually a defensive sound when males chase off intruders or mothers are protecting their young. Sea otters will sometimes bark and growl while they sleep.

However, when the barking sounds something akin to a dog, it’s an alert to other sea otters in the area. It denotes danger in some way, shape, or form.

Most sea otter pups produce squeals, cries, yelps, grunts, clicks, whimpers, and coos. They can be quite loud when frightened, nervous, or distressed. Baby sea otters are at their most vociferous when parted from their mom, however. People have likened the sound of a baby sea otter’s cry to something akin to a gull.

While they will hiss, bark, growl, snarl, and snort, it’s rather cute and not nearly as threatening as what an adult can do. But, you will often find them making such sounds when playing with their mothers or other baby sea otters.

Why Are Sea Otter Babies So Vocal?

Sea otter babies are so vocal because they don’t yet have the means to communicate otherwise. Therefore, they tend to be more communicative than adults are, especially when not in the presence of their mother.

In fact, both mother and baby will ceaselessly cry for each other until they rejoin. What’s interesting about this event is that they make similar noises that are signature only to the pair. No two sea otter mother-baby pairs make the exact same sound. There is always a variation in pitch, tone, and length.

Sea otter babies will cry every time their mother leaves them, even when she goes off to retrieve food. The mother could turn away for a mere moment and the pup will begin crying in a very loud and melodramatic way. Their crying tends to be particularly loud when the mother goes to meet an approaching male.

How Do Sea Otter Mothers Stop Their Babies from Vocalizing?

Sea otter mothers stop their babies from vocalizing by whatever methods they have available to them. Indeed, these creatures are famous for being some of the best mothers on the planet. They’re very attentive to their young and everyone can take a few notes from sea otter mothers.

They devote all their knowledge, care, and love to teaching, protecting, and comforting their babies. This is particularly the case when the pup is sad, upset, distressed or inconsolable.

Mothers will often lick their young to stop their babies from vocalizing. Licking is actually an important factor in sea otters’ mother-baby relationship and bonding. It helps to reduce stress and provides comfort, particularly when the mother licks her baby on the head.

However, she has other means at her disposal to calm her young one down. Sometimes, she’ll place her forepaws over the mouth of her screaming baby sea otter to encourage its tranquility. This is particularly useful when the baby seems overwhelmed with distress, providing immediate relief. She may even use her snout or hold the baby close to her to get the pup to stop crying.