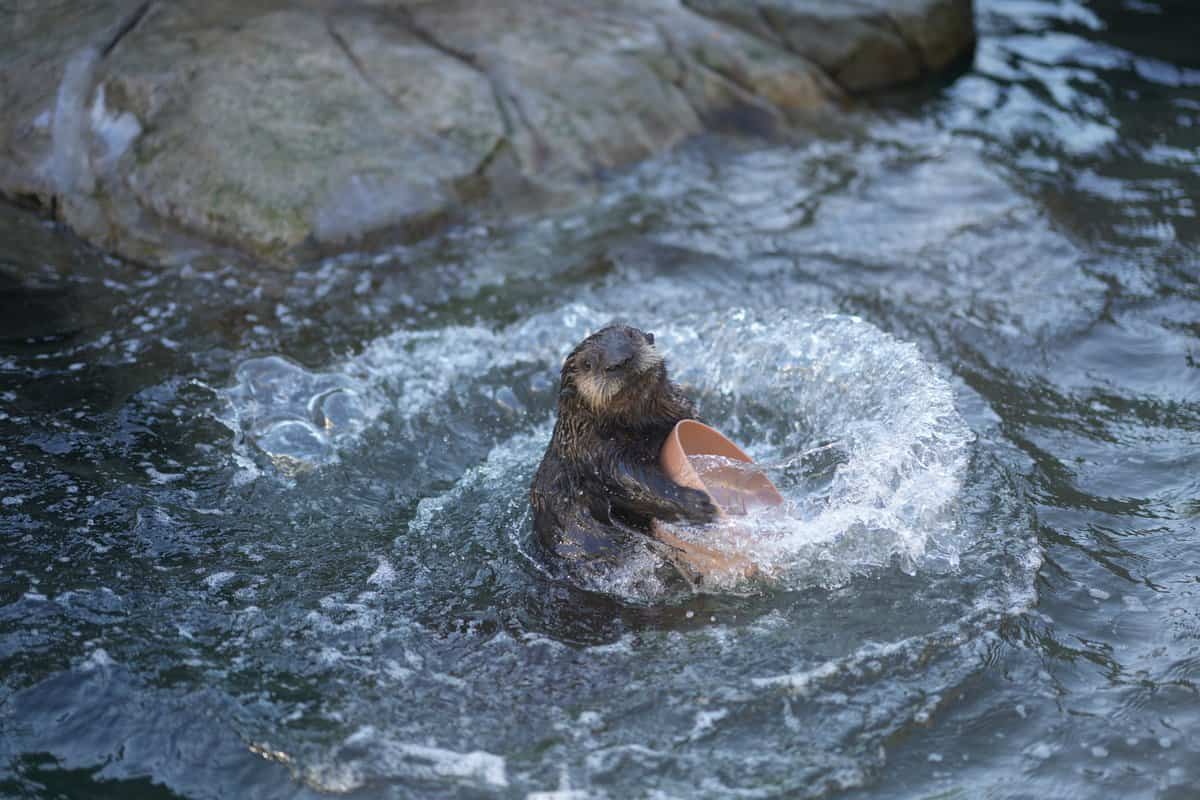 Have you ever seen a sea otter? Aren’t they charming? When I see one, I’d like to scoop them up and bring them home. I don’t but what a cuteness overload!

If you haven’t seen one though, that is because there are very few of them left. Due to the destruction of their ecosystem and poaching, sea otters are currently an endangered species. In the last few decades, their numbers have started to improve, but this takes time.

What Kind Of Animal Is A Sea Otter?

Sea others are clever marine mammals that live in the coastal areas in the eastern and northern Pacific oceans in North America and Asia.

Sea otters are among the smallest marine mammals. They are members of the weasel family, meaning that they’re cousins of badgers, stoats, and wolverines. Surprised? Me too!

I thought they looked more like a fluffier version of a beaver or a groundhog. Boy, was I wrong!

What Is The Sea Otter’s Scientific Name?

The sea otter, as it is commonly known, is also called Enhydra Lutris as its scientific name. These aquatic members of the weasel family love to float on their backs and forage for clams, sea urchins, and other seafood.

They sport exceptionally thick fur which is one of the thickest in the animal kingdom. This makes sense because they live in coastal waters and they don’t have any blubber like seals, whales, and most other marine mammals do.

Sea otters spend a surprising amount of time grooming and maintaining their fur, to keep it waterproof and warm because otherwise, they’d freeze in the cold water.

Are There Different Types Of Sea Otters?

The sea otters (Enhydra Lutris) have three subspecies, all are found on the eastern and northern coasts of the pacific ocean.

The Asian sea otters are the only marine otters found throughout the islands of Japan where they are critically endangered. Only single animals can be seen in Japan, not large groups.

The population has seen a drastic decline in recent years. They are also found in some parts of the coast of Russia.

Nicknamed the “old man of the sea,” the Northern Sea Otters are found on the coasts of the eastern Pacific ocean. They currently inhabit certain areas of the United States, specifically in Washington, and a large number in Alaska.

They also live in British Columbia in Canada.

More popularly known as the California sea otters, this endangered species is only found in the shallow coastal waters of central California. They are native only to California.

Interesting Facts About The Sea Otters

Sea otters have pouches under their armpits where they can store and carry food.

They thrive in rocky areas of the coasts where there is an abundance of clams, sea urchins, and other prey species. They generally stay in shallow waters but they are capable of diving to depths over 150 feet if they have to.

Biological studies have shown that sea otters shared the same ancestor from 5 million years ago as the African clawless otter, African speckle-throated otter, European otter, and the oriental small-clawed otter.

These are the sea otter’s closest relatives, but there are other animals in the weasel family that otters are also related to:

Other Animals Related to Sea Otters

Sea otters belong to the Mustelidae family which makes them related to land mammals like:

Is The Sea Otter A Kind Of Seal?

If you take a closer look, they have distinct features that keep them apart. For example, seals have flippers while sea otters have paws.

Sea otters also have thicker fur compared to seals, and then seals have blubber, a thick layer of fat under their skin, which helps them stay warm, while sea otters have almost no fat on their bodies, relying fully on their fur to stay warm.

Just the same, both are adorably cute.

Are Sea Otters Related To Beavers?

Sea otters are not related to beavers, not at all. They may look the same at first glance because of their size and shape, and even behavior (if you don’t look too closely) but they are not the same or related.

Sea otters are marine mammals that are related to weasels while beavers are rodents related to groundhogs or squirrels. Big difference, don’t you think?

Sea Otters Are Not Related To These Animals Either

Sea otters are often confused as relatives of many animals due to some physical similarities. I have heard of ridiculous comparisons of sea otters to cats, sea lions, and many others.

Some call sea otters “sea cats” but they are in no way cats or related to them.

How Did Sea Otters Evolve?

Based on fossil evidence, scientists believe that sea otters descended from a fish-eating terrestrial weasel-like ancestor that lived about 5 to 7 million years ago. This is during the Miocene and early Pliocene periods.

They slowly evolved into semi-aquatic hunters that lived in freshwater and marine habitats.

The sea otter is among 13 living species of otters today. Most of these species are endangered, especially sea otters. After 7 million years of existence, I hope we won’t let them disappear.

What Is The Sea Otter’s Ancestor?

The sea otter’s ancestor is an ancient form of the weasel. Fossil evidence of the existence of freshwater otters dates back 5 to 23 million years ago.

There is no given name for the weasel-like ancestor itself but it is known to be the beginning of the Lutrinae lineage.

Where Do Sea Otters Come From

As I have mentioned earlier, sea otters descended from ancient weasels that lived 5 to 7 million years ago.

They are believed to be piscivores (or fish-eaters) that have evolved for millions of years and ended up inhabiting freshwater and coastal areas where there is an abundance of fish and aquatic food sources.

The sea otter has come a long way, don’t you think? Too bad they are critically endangered now.