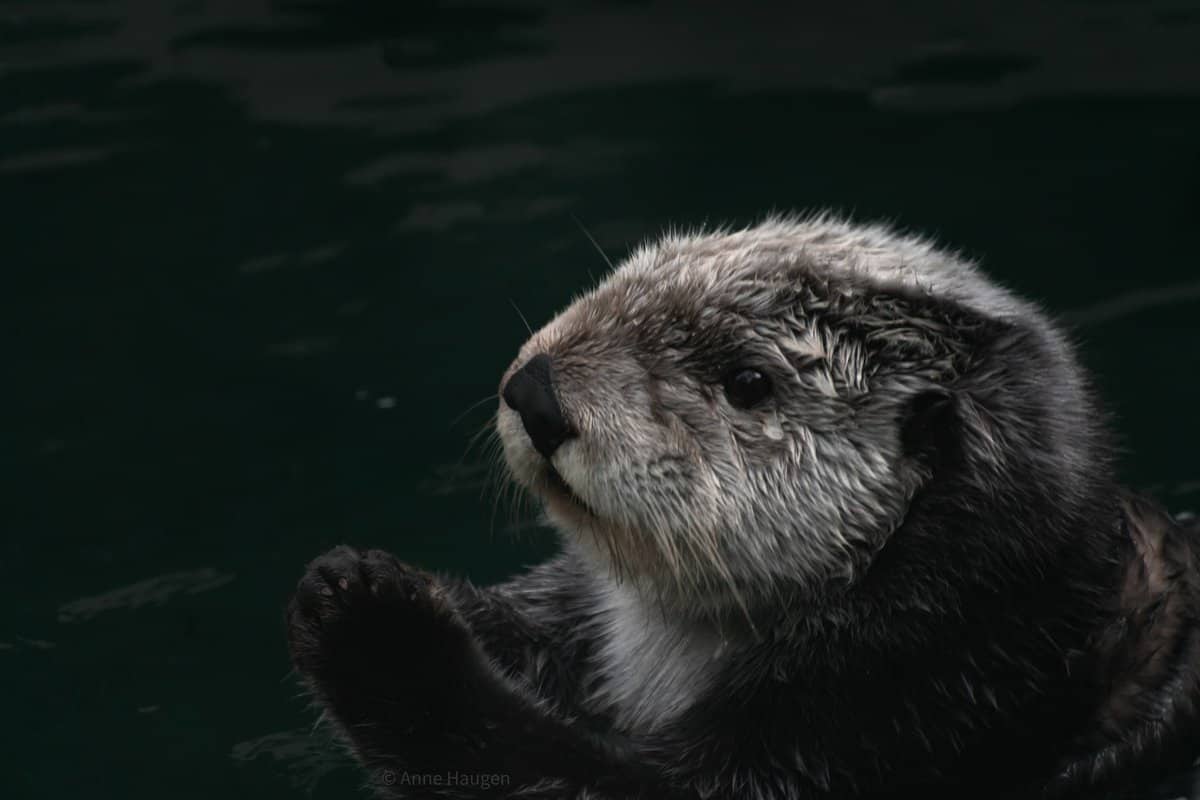 Here at Floofmania, sea otters are one of our favorite marine mammals – and they could also be yours! After all, who can resist those charming furry faces? But they’re so much more than their fluff and cuteness; they are one of nature’s greatest aquatic environmentalists!

As keystone species, sea otters help keep kelp forests healthy by munching on sea urchins that can completely deplete giant kelp beds if left unchecked. They also crunch on green crabs that are invasive to eelgrass. Both kelp and eelgrass are habitats for fish and many other aquatic lifeforms and are crucial for coastal ecosystems to thrive.

Sea otters are also considered sentinel species susceptible to disturbances in their marine environment. So unknowingly consuming contaminated or infected shellfish will directly affect their health. Although eating it can make them sick, it will warn humans that the shellfish in that particular time is potentially dangerous to consume.

But despite their contributions, sea otters have presently remained an endangered species. Conservation efforts and protective laws are in effect, but their numbers are still in a decreasing trend since 2000. Stay with us as we discuss the threats contributing to their declining numbers, and show you how we can all help the precious sea otters.

What Are The Principal Dangers To Sea Otters?

We may not typically look at sea otters the same way we view the big and fierce bears and wolves. But sea otters are predators of invertebrates in nearshore seas and estuaries. So they only have some natural predators to worry about.

Aside from predation, the other primary dangers to sea otters are sadly caused by humans:

So human beings are, unfortunately, the biggest threat to these creatures.

What Animals Prey On Sea Otters?

Strong and healthy adult sea otters are mainly preyed upon by only a few predators, such as killer whales and great white sharks. But fragile elderly sea otters as well as immature pups often fall prey to land mammals (coyotes, bears, and wolves) and birds of prey (bald eagles).

Since 1990, killer whales have been a threat to Alaskan sea otters. Scientists believe this diet shift is because North Pacific sea lions and seals have declined. They also estimate that killer whales can consume 1,825 sea otters annually, amounting to more than 50,000 sea otters since the shift.

This particular sea otter luckily evaded a persevering orca with the help of a human:

Researchers have learned that great white sharks don’t actually intend to eat sea otters. Instead, they believe that the attacked otters mainly were mistakenly identified as seals, their actual prey.

Yet a shark’s bite is fatal, and southern sea otters often won’t make it because of blood loss or because their wounds get infected by bacteria.

Bald eagles like to swoop down on sea otter pups, especially when they’re left tied on kelp at the water surface while their mothers are foraging. Coyotes, bears, and wolves can also occasionally hunt sea otters when they haul out on land to rest like this unfortunate sea otter here:

How Do Humans Threaten Sea Otters?

Human beings pose the greatest threat to sea otters. Historically, humankind has largely contributed to them being on the brink of extinction in 1910 by hunting them for their meat and prized warm, velvety furs.

Thankfully, sea otters have been protected from humans starting in 1911 under the International Fur Seal Treaty. Governments and organizations have since added more laws and protections to ensure their safety worldwide, such as the Marine Mammal Protection and Endangered Species Acts in the 1970s.

These measures and numerous conservation and reintroduction efforts have slowly contributed to the sea otters’ recovery. Yet their current numbers are decreasing and still far from their historical population of 150,000 to 300,000.

Here are four human factors that can delay and even abrupt their species’ recovery:

Sea Otters Get Sick With Toxoplasmosis From Cat Litter

Toxoplasmosis is caused by the Toxoplasma gondii protozoan parasite and can infect all warm-blooded animals. Yet the definitive hosts or the stage when the parasite can multiply and spread are through the feces of domestic cats (and wild cats).

The cat litter of the infected cats is loaded with the parasite’s microscopic egg-like forms (oocysts). The microorganism will eventually end up in the ocean from drain runoffs and treatment facility wastewater when people flush the litter in their toilets unhygienically.

At this time, filter-feeding invertebrates (such as marine snails, mussels, and clams) in the sea will ingest the parasite. Then the infection will further spread to southern sea otters as they forage and eat them. Toxoplasmosis can be life-threatening for the infected sea otters.

Oil spills are the most detrimental of all the potential human threats affecting sea otters.

Sea otters depend on their furs to keep them afloat and warm in cold seas:

The 1989 Exxon Valdez disaster spilled over 11 million gallons of crude oil in Prince William Sound. It was among the worst oil spills for sea otters and other marine organisms after a human error destroyed the ship’s hull.

Biologists estimate that the total number of sea otters that didn’t make it from the spill was 3,000 to 11,000. So even though ships have double hulls and stricter laws exist today, a similar large oil spill on the coast of California could eradicate southern sea otters.

We hope we won’t reach that point in anyone’s lifetime.

Entanglements With Fishing Line Is A Threat To Sea Otters

Although infrequent, sea otters can become entangled or trapped in broken fishing lines and unintentionally left-behind hooks or other fishing gear. A sea otter is more likely to come into contact with these objects when it dives and looks for food.

Once a fishing line becomes twisted to the sea otter’s body, it will be hard for the animal to remove it by itself as it can wrap its body pretty tightly.

The otter will then be at risk of starvation, exhaustion, and drowning. The line can also cut through its skin, causing physical trauma and possible infection, just like this unfortunate young female sea otter, Agua.

Fortunately, she was spotted, rescued, and released back into the wild after a few months. But not all sea otters are lucky like her; many could get locked in shellfish traps and gill nets. Unfortunately, most of them won’t survive after.

Even though these kinds of fishing gear are banned or limited in some areas like California, wider protection scopes or ranges and creative solutions are still needed to keep sea otters safe today.

Sea Otters Get Hit By Boats and Even Cars On Land

One fateful night in July of 2016, a male sea otter was unfortunately hit by a speeding car while trying to cross Moss Landing Road. Unfortunately, the driver didn’t even report the incident, and the otter was just found lifeless on the side of the road a few hours after it happened.

Sea otters are picky eaters, and they usually have their favorites that they tend to seek and consume when they’re in abundance. The male otter was risking his life by crossing from its safe harbor home to the brackish water location of its favorite prey. Unfortunately, he didn’t even get to the other side of the road that night.

In 2003, four sea otters on California’s central coast didn’t survive the blunt force trauma they got from fast-moving boats. Although sea otters appear like corks on the water’s surface, going too fast doesn’t also help you notice them in your path.

A sea otter getting hit by a boat’s hull will more likely suffer from broken ribs and bones as well as internal bleeding. The sea otter can also be seriously injured with deep lacerations if it gets hit by a boat’s propeller.

Boaters, including kayakers, can also disturb napping and resting sea otters when they get too close to them. Sea otters are naturally afraid of humans, so any water or shore disturbances will cause them to flee or swim away.

Aside from stress, running away from people will waste the extra energy that they don’t even have in the first place and are trying to generate by sleeping!

How Can You Help Protect Sea Otters?

To help prevent sea otters from getting sick with diseases such as Toxoplasmosis, you should:

To avoid getting sea otters entangled in fishing lines or gear, you can:

To avoid hitting sea otters, you must:

Supporting conservation efforts for sea otters and their habitats’ reconstruction programs will also greatly help. And in this age of modern technology, sharing information and articles such as this one on your social media platforms will help spread awareness about the critically important, adorable sea otters!

Here is a video from our friends at Sea Otter Savvy. We hope that all of us can give the precious sea otters their space to float in our world as we groove to this song: