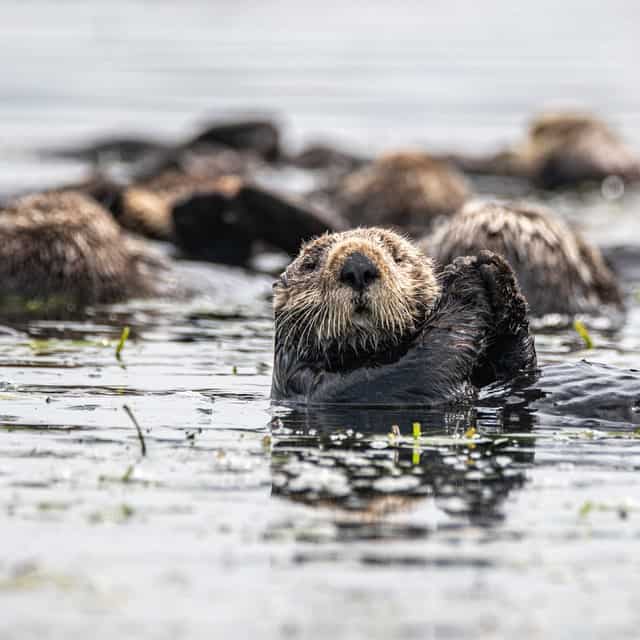 Sea otters, as their name suggests, are sea-dwelling members of the Mustelidae family. Most of the time, these animals are perfectly harmless to both people and their pets. However, they do possess strong teeth and a powerful set of jaws that can give a formidable bite.

If you are lucky enough to spot a Sea otter in the wild, the safest option is to maintain your distance and observe this noble species from afar. This article lists everything you need to know about See otters, from their behaviors in the wild to their interactions with people and pets.

Are Sea Otters Dangerous to People or Pets?

Sea otters are not usually dangerous to people or pets, but they are wild animals and they should never be approached by humans.

Over 90% of Sea otters live off the coasts of Alaska and they are a popular tourist attraction. This is because of their unique quirks including the fact that they usually spend every moment of their lives living in the ocean and they have exceptional fur, which is the thickest in the animal kingdom.

If you’re on a kayak, taking in the sights of the picturesque Aleutian Islands, you should leave any area populated by Sea otters to make sure you avoid interaction. Sea otters are formidable marine creatures with a number of skills and physical attributes that help them survive in the competitive world of the north Pacific’s marine environment.

Many of the instinctual behaviors of Sea otters are there to help them defend their territory, protect their young, mate, and find food.

If Sea otters become habituated to humans, they may end up exhibiting these behaviors towards people and their pets.

Sea otters are not naturally aggressive to people or pets and they generally stay away from people if they are left alone. As marine creatures, they only come into contact with people when humans venture into their natural habitats.

They may be provoked into aggressive behavior in the following situations:

If Sea otters are exposed to humans and human activity over time, they can become habituated to people and their pets. This is a problem because it means that Sea otters can lose their fear of humans, which can make them bold and aggressive.

Examples of this include jumping onto kayaks or moving onto the beach to interact with people and their pets. While the behavior might stem from curiosity, it can quickly lead to aggressive behavior.

When this happens, both Sea otters and people can get injured, so it is imperative to stay away. A minimum distance of 60 feet, or five kayak lengths, is best.

Male Sea otters are extremely territorial and they will defend their sphere of influence from both wild animals and domesticated animals like dogs and humans. This is especially true when the males are competing with other males for a female partner.

Female Sea otters are famed for their devotion to their young. They give them almost constant attention and are known to groom their fur and hold their pups on their chests to keep them warm and out of the cold water.

Pups are vulnerable when their mothers leave them to dive to the seafloor for food. Even though they wrap their pup in kelp on the surface, it is a dangerous time for them. If the pup is threatened by a human or domesticated dog, the mother will show aggression to defend it.

Whether or not it is acting with aggression, attempting to play, or just being curious, your family dog can harass and even injure a Sea otter.

Sea otters typically weigh between 31 and 91 pounds (14 and 45 kilograms), which means that they, too, can seriously hurt a dog.

In Which Cases Might Sea Otters Be More Aggressive?

You’re most likely to experience a really aggressive Sea otter in the following instances:

Do Sea Otters Ever Attack Humans?

Most Sea otters are not habituated to humans and are generally shy around them. According to the Alaska Department of Fish and Game, Sea otter attacks involving humans are extremely rare. When they do happen, it is usually because people have gotten too close to a mother and her pup.

The best way to keep you and yourself safe is to keep away from Sea otters in their natural habitats.

If a person is ever attacked by a Sea otter, a trip to the nearest medical facility is necessary because the animal might be carrying a disease that is dangerous to humans.

It is also the law! Sea otters are protected under the United States Federal Endangered Species Act and the Marine Mammal Protection Act. These laws prohibit harassing, hunting, capturing, and killing Sea otters.

Do Sea Otters Ever Attack Dogs?

Like humans, Sea otters will usually avoid interacting with dogs and attacks are rare. However, they will show aggression to dogs if they threaten them or their pups, and will defend themselves if attacked.

No matter how well you know your dog or can control them, the best way to avoid harm for both your dog and the Sea otter is to keep your dog on a leash when near a colony.

Do Sea Otters Carry Any Diseases that Might Be Dangerous?

Yes, Sea otters carry diseases that might be dangerous to humans. Direct interaction with Sea otters has the disk of disease transmission, both from humans and pets to the Sea otter, and vice versa.

Although it is not common, Sea otters can be infected with the single-celled parasite Toxoplasma gondii, the marine Brucella bacteria, and the fungus Coccidioides immitis. The latter causes the fungal infection known as ‘Valley Fever’ in humans. It can manifest as a fever, cough, and fatigue and it can be serious in some cases.

Can You Pet a Wild Sea Otter?

Like all wild animals, Sea otters are unpredictable and you should never, in any instance, try to pet them. Not only is it dangerous for you, but it can also be harmful to the Sea otter but putting undue stress on the animal and the colony.

If you touch a wild Sea otter, you may also face serious legal consequences. According to the US Fish and Wildlife Service, it is illegal under the Marine Mammal Protection Act to touch a marine animal without proper authorization.

How Do I Behave Around Sea Otters?

There’s no denying that Sea otters seem cute and their fur looks like it would be wonderful to touch. But they are wild animals and you should stay away from them.

Most Sea otters will try to flee before you get close, but some may be unpredictable and you might end up getting a bite!

If you follow these tips, you have nothing to worry about:

It’s hard not to fall in love when you see a picture of a sea otter. They’re small marine animals with adorable button eyes, tiny round ears, and have those beans on their paws (just like kittens). Something that looks that sweet can’t be dangerous, right? Looks can be deceiving. Sea otters are one critter you don’t want to get a bite from, and the scary fact is they don’t wait for a reason to chomp down like a lot of animals do.

You may have seen videos of sea otters splashing around in the water and having an absolute blast. They look so carefree and fun-loving. It’s almost impossible to imagine them hurting a fly.

Sea otters do have a lot of fun when they are with each other. Add an unknown party into the mix and then the atmosphere completely changes for these cute little critters. The thing about sea otters is that they hate confrontation. When they don’t know what a person or animal’s intentions are they can get very hostile. You never want to be on the receiving end when this happens.

Are Sea Otters Dangerous to People or Pets?

Sea otters are not usually dangerous to people or pets, but they are wild animals and they should never be approached by humans.

Even if you’re on a kayak, taking in the sights of the picturesque Aleutian Islands, you should leave any area populated by Sea otters to make sure you avoid interaction.

Beyond their thick, soft fur and friendly warm faces, Sea otters are formidable marine creatures with a number of skills and physical attributes that help them survive in the competitive world of the north Pacific’s marine environment.

Many of the instinctual behaviors of Sea otters are there to help them defend their territory, protect their young, mate, and find food.

If Sea otters become habituated to humans, they may end up exhibiting these behaviors towards people and their pets.