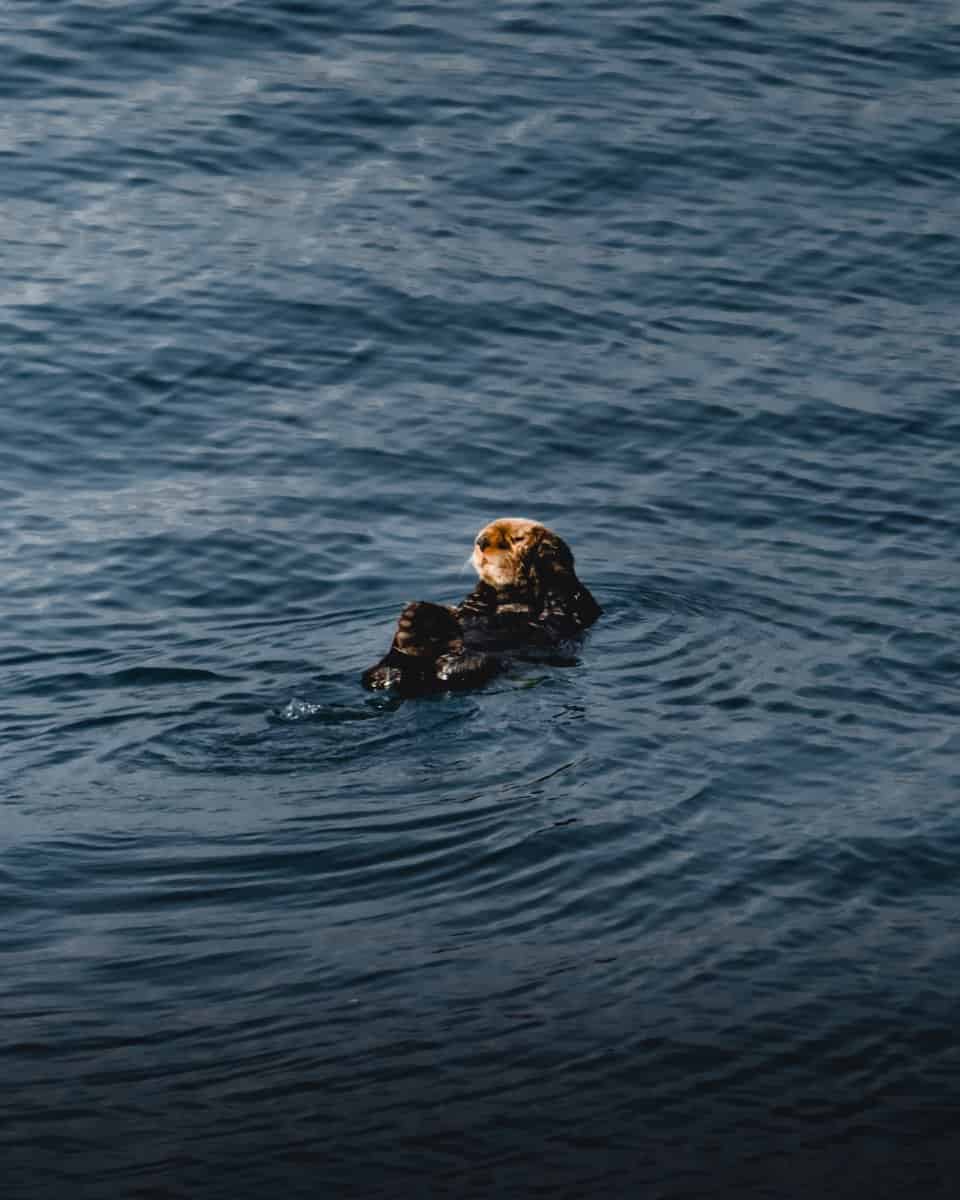 Sea otters (Enhydra lutris) are marine mammals from the Mustelidae family whose future is uncertain. These native weasels of the northern and eastern areas of the Pacific Ocean were once abundant reaching a population of 300,000 in the 1700s.

Their existence at present is now a cause of major concern. There are now only about 107,000 sea otters living on this planet—and that’s not a lot compared to what they once were.

What happened to these poor creatures? Why have their populations continued to decline? Are they victims of natural selection and failure to adapt? Or do humans have something to do with the sea otter’s predicament? What can we do to help the sea otters?

Floofmania will now delve into the concerning and worrisome situation of the sea otter’s path either to extinction or survival.

Is The Sea Otter Threatened?

Sea otters are classified as an endangered group of animals. While this information shouldn’t be up for debate, some groups claim that the animals’ status has been lifted to threatened in some areas. The population may have improved in some places, but the global number of sea otters has not recovered at all.

There are areas where the sea otter populations—particularly on the coast of central California— have increased by an average of 5% yearly, which is a good sign. However, there are locations where populations of the marine weasel have continuously declined or have completely vanished.

Why Was The Sea Otter Nearly Extinct?

The sea otter has a lot of predators, both on land, in the sea, and even from above.

Inland, bears and coyotes are occasional threats to the sea otter and their defenseless pups. In the sea, killer whales, sharks, and stellar sea lions are among the most dangerous predators of sea otters. These large animals usually eat multiple sea otters every time they come for a visit.

Predatory birds like eagles also swoop from the skies and grab sea otters, especially their pups, whenever the opportunity arises.

Sea otters, particularly males, become sexually mature and able to produce offspring at around 5 years of age. If you consider the sea otters’ average lifespan of 10 years, that’s not a lot of years for them to multiply.

Moreover, most juvenile sea otters never reach the age of full sexual maturity due to predation and disease.

Researchers have found out that a large number of sea otter populations (70%) are infected with Toxoplasma. This is highly contagious and about 17% of infected animals will succumb to the disease. The protozoal parasite that causes the disease is from cat litter flushed into the sea.

This disease is caused by protozoa and causes brain swelling (encephalitis) in sea otters. Affected animals have an almost 100% mortality rate.

Microcystins are chemicals produced by algal growth and have been reported to infect sea otters as well. Toxin-producing algae bloom is stimulated by the presence of nutrients coming from fertilizer and sewage water that flows to the sea.

Humans are the Biggest Threat to Sea Otters

There are no other species that have a greater impact on the existence of sea otters than humans. Early human inhabitants of North America frequently hunted sea otters for their fur and meat.

The practice has continued for centuries and only got worse with the maritime fur trade of the early 1800s, where European settlers almost caused the extinction of the species.

How Many Sea Otters Are There Today?

A global estimate of the sea otter population is currently at 107,000. Alaska is currently the home of a large majority of sea otters. It is estimated that this northern US state has about 73,000 sea otters living in the region.

The sea otters in Russia are said to be the most secure and thriving. Down to 750 individuals after the “Great Hunt” of 1741-1911, the sea otter population in the region at present is at 27,000. Areas, where sea otters are prevalent, are Kurils, Kamchatka, and the Commander Islands.

The remaining colonies of sea otters are sparsely distributed in Japan, British Colombia, Mexico, and a few coastal areas in the US.

How Did The Sea Otter Population Change Over Time?

In the course of history, the endemic and native populations of sea otters were decimated to the point of near-extinction due to wide-scale hunting and habitat destruction. The survival of the species was hanging by the thread when laws and treaties to protect the sea otters came into effect.

As there were historical habitats where the species has been declared extinct, reintroduction efforts were repeatedly done to repopulate the areas. Some were successful while most failed.

When Were Sea Otters At Their High-Point?

The high point of the sea otter population was before the fur trade began in the 1740s. These animals were thriving in the hundreds of thousands. The animals can be found almost everywhere and were often mentioned in historical documentation and personal memoirs.

How Close Were Sea Otters To Extinction?

When a species population drops down to a fraction of what they were, that’s very close to extinction. The fur trade of the past couple of centuries played a huge role in pushing the sea otter to the brink of extinction. More than 500,000 sea otters were hunted just for their furs during that time period.

There was a point in recent history when the global number of sea otters dropped down to the low thousands. Fortunately, the recovery of the sea otter population in Alaska grew from a mere 2,000 individuals to 110,000 in the 1990s.

Are Most Sea Otters Today Related To The Same Group Of Surviving Sea Otters?

Most sea otters found in other countries and in the US states of Alaska and California are said to be descendants of their native population. The marine animals have thrived against all odds and their populations have gradually recovered.

In the state of California, the current population of sea otters is said to have descended from 50 remaining individuals in Bixby Creek Bridge. Their range has expanded and the mustelids can be seen from Pigeon Point to Santa Barbara County.

The same cannot be said of the mustelid’s numbers in British Columbia in Canada and the states of Washington and Oregon in the US. Sea otters in these areas were considered to be extinct before repopulation and relocation efforts were made.

Such efforts have consistently failed but wildlife preservation groups and agencies have not given up.

There are currently a lot of treaties, laws, and civic groups that are dedicated to preserving and restoring sea otter populations around the world. Efforts of reintroduction and repopulation are also being done in areas where the sea otter has supposedly gone instinct.

Will Sea Otter Populations Ever Be Back To Historical Levels?

There’s no definite answer to this question. Despite the efforts and programs to protect the sea otters, their population has never recovered to its all-time high levels. Their status remains threatened with their numbers similar to what they were decades ago. The future of sea otters remains gloomy and uncertain.

What Would Happen To The Environment If Sea Otters Went Extinct?

The sea otter is a top predator of near-shore marine communities and therefore a keystone species. It plays a very important role in maintaining balance in the ecosystem.

If unfortunately, all the sea otters on this planet go extinct, the ecological communities within their habitats will go haywire. That’s a situation that never should happen.

The extinction of a keystone species will dramatically alter the ecosystem it leaves behind. If worse comes to worst, that ecosystem will altogether cease to exist.

A perfect example of this is the relationship between sea otters and the kelp forest ecosystems. The presence of the mammals keeps the kelp forests healthy and thriving by foraging on the sea urchins that feed on the kelp.

In short, the sea otters protect the kelp from the voracious sea urchins. Sea urchin colonies grow and spread at very rapid rates. Without the sea otter, kelp forests would also be decimated to extinction. Such is the case with the kelp forests in Monterey Bay on the coast of California.

Why Is Kelp Important?

Kelp is a type of seaweed that can be found in shallow coastal areas around the world. These algae, like the sea otter, play a major role in maintaining the equilibrium of the ecosystem. Kelp forests provide food, shelter, and protection, among others, to a lot of marine wildlife.

A lot of animal species use the underwater canopy as their source of food, shelter, and nursery for their younglings. Marine wildlife like rockfish, cabezon, and various species of red urchins and abalone greatly depend upon these kelp forests for their sustenance.

The kelp on the West Coast protects the wildlife from storms and huge waves coming from the Pacific Ocean. Their presence also prevents coastal erosion as well as acts as a filtering system against pollutants.

Climate change is brought about by greenhouse gases, especially carbon dioxide. The more levels of carbon dioxide increase, the warmer will the planet becomes.

Thanks to the kelp forests, along with the rest of the marine vegetation, they protect the planet from the destructive accumulation of carbon dioxide in the atmosphere by absorbing it. Marine plants, especially kelp, absorb 20 times more carbon dioxide compared to land plants.

Kelp Forests Tell The Health Of The Ecosystem

The presence of kelp in the coastal waters is also an indicator of how healthy the area is. If an area is filled with marine vegetation like kelp forests, it shows that such an ecosystem and its member species are healthy and thriving.

No, sea otters do not directly bring down carbon dioxide (CO2) levels but they play a part in the protection of kelp forests, the major player in bringing down the levels of greenhouse gas.

That being said, we can deduce that without the sea otters protecting the marine plants, the carbon dioxide levels would rise leading to irreparable damage to our planet.

What Can We Do To Help Sea Otters Thrive?

The sea otter, as a keystone species, needs to be protected. Humans are the major threat to their survival. However, it is not yet too late. We can still do some small things that have huge effects on the sea otter and help in the efforts to increase its population.

Here’s a short checklist we made for you: