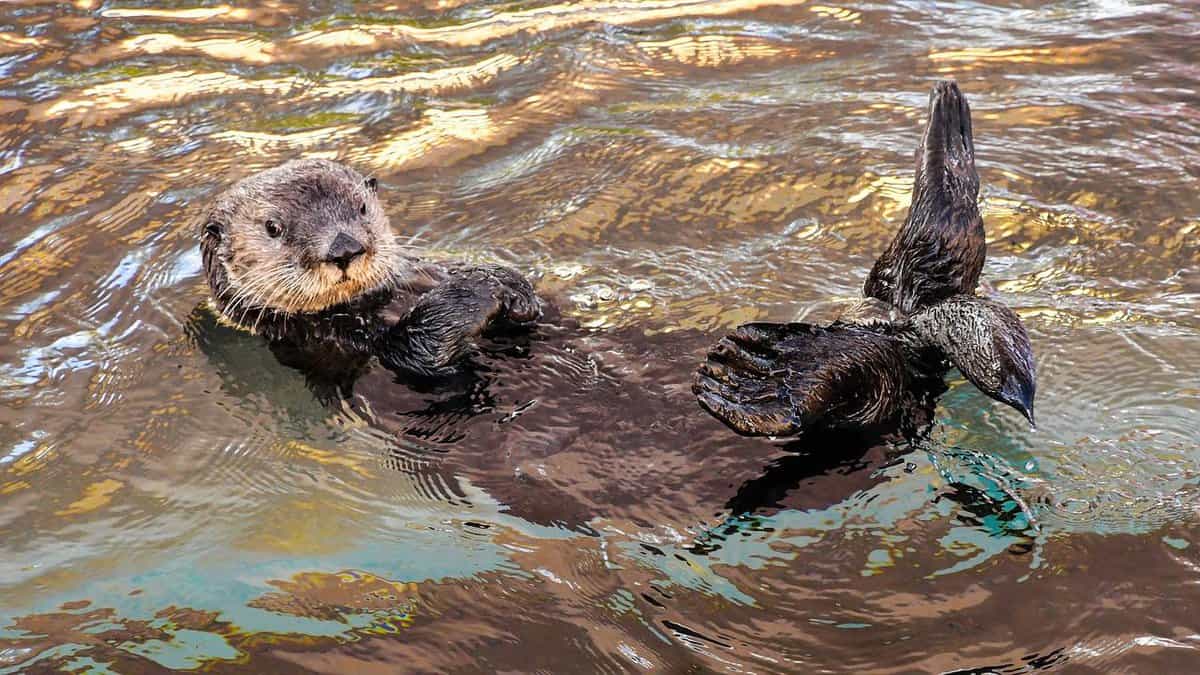 Sea otters are the heaviest marine mammals of the Mustelidae family. Out of the 13 other carnivore members of the mustelids, the sea otters can weigh up to 100 pounds and grow up to 5 feet in length.

These adorable-looking critters are important aquatic species that help maintain the health of kelp forests. Kelp, of course, is an essential source of food and shelter for many sea animals but can be significantly diminished by sea urchins. Sea otters, in turn, consume sea urchins and keep their numbers in check.

Continue below to know how these keystone species’ sizes compare to their subspecies and other sea mammals.

How Much Does A Sea Otter Weigh?

Despite being heavyweights in their family, sea otters are one of the smallest marine mammals.

Their average weight of 20 to 90 pounds comes shy in competition with big sea dwellers like sharks and whales.

Their size makes them the perfect prey for their known larger predators like killer whales.

Furthermore, some individuals occasionally reported record-breaker sea otters weighing as much as 120 pounds.

Sea Otters Maintain Their Weight By Eating A LOT

Sea otters must consume 20 to 25% of their body weight daily.

These delightful creatures spend 8 hours of their day looking for food in order to feed themselves.

And this requires high energy expenditure, thus the need to consume a quarter of their weight every single day to keep up with their metabolism.

Their Source of Food

The sea otters’ main food source is the ocean, so they naturally spend most of their life at sea.

Although these otters can also walk on land and actually need air to breathe.

These sea otters dive up to 250 feet below the water to dig and catch their prey with their forepaws, yet they need to return to the surface for air after 5 to 7 minutes.

You might have thought that these cute critters breathe underwater. But don’t worry cause I did, too.

Sea otters prey on over 100 species, with some of the popular ones being:

Now, you might wonder how sea otters can break through and eat these mollusks and shells. Well, these marine mammals are only one of the few non-primate animals to use tools such as rocks in foraging for their food.

In addition, though most of these food sources are relatively small compared to them, sea otters are not afraid to take on bigger prey like octopuses.

How Big Is A Fully Grown Sea Otter?

Full-grown adult sea otters typically reach 3 to 5 feet in length and weigh between 30 to 100 pounds.

These numbers make them the heaviest marine members of the weasel or the Mustelidae family.

And here’s a little fun fact for you:

The color of a sea otter’s fur becomes lighter as they age.

In adults, the chest, throat, and head appear visibly different in color and shade than the rest of the body.

In addition, this pelage keeps the sea otter dry and insulated. As a result, they have the densest fur in the animal kingdom, making up 150,000 hair follicles per cm2.

Male sea otters can weigh anywhere between 50 and 100 pounds, while females can come in 30 to 75 pounds.

While they may be smaller, female sea otters outnumber the males by an average of 5:1 ratio.

How Big Are Baby Sea Otters?

Baby sea otters or pups are born 1.6 to 2 feet in length and weigh anywhere between 3 to 4 pounds.

These pups amazingly come out somewhat advanced for their age or precocial: they are already opening both of their eyes, their first teeth emerging, and have a full coat of dense fur at birth.

Sea otter pups, however, need complete care and protection from their mothers for up to 8 months.

According to Britanica.com, a sea otter is both the most prominent otter type and the largest member of the Mustelidae family.

They suggest that while most mustelids are fairly small in size, sea otters can grow up to 5.4 feet long and weigh as much as 90 pounds when fully grown.

However, some experts consider the Giant Otters from South America to be the biggest otter type.

They argue that these giant otters can grow up to 6 feet and therefore need to consume 4 to 9 pounds of food daily.

Moreover, these giant river otters can only weigh up to 75 pounds compared to the sea otter’s capacity of growing up to 100 pounds.

So, I consider the giant otter to be the otter with the longest bodies, but the sea otter takes the largest or heaviest otter type spot.

Are Northern And Southern Sea Otters The Same Size?

No, the northern Pacific Ocean’s Northern and Southern Sea Otters differ in size.

The physical difference between the two is notable as the Southern one can only grow up to 4 feet while weighing up to 70 pounds for males and only 50 pounds for females.

In contrast, the Northern Sea Otters can grow up to 5 feet while having a total mass of 100 pounds for males and 70 pounds for females.

Therefore, the Southern Sea Otters are the smallest marine mammals in North America.

How Big Are Sea Otters Compared To Other Marine Mammals?

There are four taxonomic groups of marine mammals:

While we expect Cretaceans are full of humungous mammals like whales, smaller members more similar in size to an otter are also present.

For example, the Commerson’s Dolphin and the world’s most endangered marine mammal, Vaquita, both measure 5 feet in length. In addition, the dolphin weighs up to 190 pounds while the latter almost 110 pounds.

What The Guinness Says

The Guinness World Record of the smallest marine mammal goes to the rare South American Sea Cat or the Lontra feline. This rare marine otter only measures 2 feet in length while weighing no more than 11 pounds.

Sea otters actually come in second place with a recorded weight of between 50 to 100 pounds and a length of 4 feet.

Not bad for the cute yet marine-ecosystem-essential creatures, right?