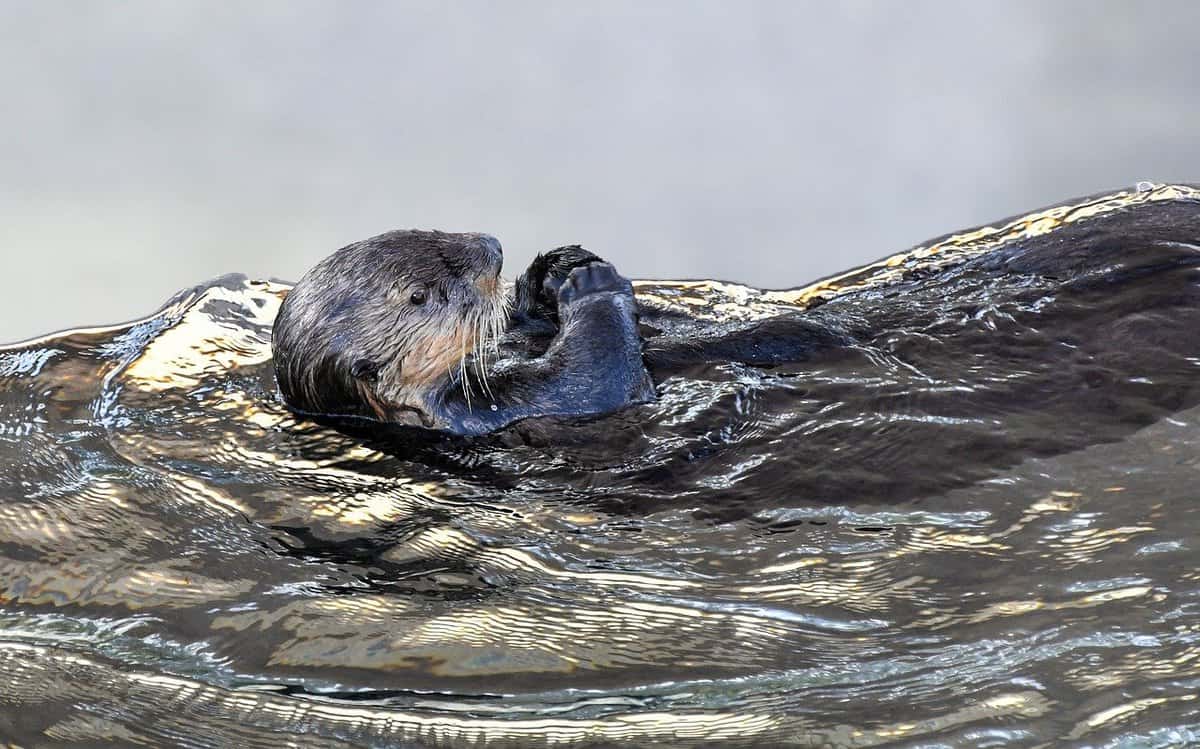 Sea otters get their food, give birth, groom, play, and rest entirely in the ocean. So even though they can get out of the water and awkwardly walk on land to rest or seek shelter in a storm, sea otters spend most of their lives at sea.

Moreover, sea otters live in chilly waters that can reach temperatures as low as 35 to 60°F, yet their bodies need to be maintained at 100°F to survive. So how do they get their body heat up despite frolicking in these cold seas?

Join us as we dive into how well these cute, cuddly mammals have adapted to their marine environment. Let’s take a plunge into the speeds and depths of the sea otters’ swimming and diving abilities.

Yes, it is safe to say that sea otters are very good swimmers because they spend most of their days at sea, with swimming being their primary way to move around.

According to a study by Williams, sea otters have many adaptations that help them swim and survive in the ocean, while at the same time, reducing their energy consumption while in the water.

Here are some of them:

Sea otters have elongated bodies that taper toward their small heads, which is the characteristic body shape of their Mustelidae family. These elongated bodies help them move more effortlessly through the water, with as little drag as possible from the water they swim through.

Sea otters do appear to have stockier bodies than many of their weasel cousins – but it’s because they have large ribcages to accommodate their large lung capacities!

Their streamlined bodies minimize friction drag which is the force that can slow them down while swimming. This also helps them conserve energy.

Therefore, the sea otter’s relatively slender body allows them to conserve energy while gaining swimming speeds comparable to the average speed of seals.

Sea Otters Have Powerful Hindlimbs And A Tail

Instead of swimming with their front paws, sea otters have evolved to use their large and flattened webbed hind flippers as their main propellers in swimming. Their muscular tails are also short and flattened from top to bottom, which makes them their form-efficient paddles at sea.

So when sea otters swim by moving their bodies in up and down wave-like motions (or vertical undulations), they use their hindlimbs and tail to maneuver their direction while tucking in their forelimbs to their chests.

Sea otters don’t go too far from the shores. Instead, they typically remain within their home ranges, covering a few square miles to 25 mi2.

A sea otter has two “swimming modes”, one when diving, and one when “cruising” on the water’s surface. When swimming on the surface, a sea otter usually swims belly-up on its back and can reach a speed of 0.9 mph with the help of its tail and its hindlimbs.

However, when the sea otter dives in order to hunt, or escape from predators, it moves its entire body up and down in wave-like motions. These body undulations help sea otters move faster under the sea.

At this point, sea otters can reach swimming speeds of up to 5.6 miles per hour underwater – close to a human’s average running speed of 4 to 6 mph!

Do Sea Otters Swim On Their Backs?

Yes, sea otters do swim on their backs. In fact, they prefer swimming like this as they spend the majority of their lives floating on their backs to eat, groom, and rest.

And as they swim on their backs, they also use their webbed hind feet to propel themselves through the water. In addition, the fifth digit on each of their hindfoot is significantly elongated, which helps in their back-swimming efficiency.

Furthermore, many people find the sea otter’s clapping-like stance of sticking out their front paws adorable. The reason that sea otters do this, however, is because sticking their paws and feet out of the water conserves their body heat, especially when it’s cold.

How Do Sea Otters Float So Well?

A sea otter’s buoyancy is attributable to the air trapped inside its fur and its large lung capacity.

Sea otters are capable of adjusting their lung volumes with the water temperature. For example, they will increase their lung capacity in cold waters to make themselves float better and reduce heat loss. In warm waters, they’ll do the opposite.

These marine mammals have more than a million hairs per square inch of their body – making them the animals with the densest fur on the planet! And to think we only have a total of 100,000 hairs on our entire heads, that is, indeed, a lot of hair on a sea otter!

A sea otter’s fur has two layers: the long, 1 1/3 inches of waterproof guard hairs and the soft, dense underfur, which provides an extra layer of insulation by trapping air within the under hair strands.

However, the air bubbles dissipate from their fur if they dive too deep. Thus, sea otters need to constantly groom themselves and trap air into their hair by squeezing every inch of their fur while rolling and somersaulting in the water. They can also easily clean their back as their skin is stretchable up to 150% of their body length!

By removing debris and oil from their fur as they clean themselves, sea otters help the microscopic barbs in their guard hairs to hold air in place. It, in turn, ensures that the underfur remains dry and their bodies stay warm against their cold environment.

Furthermore, this air trapped in the thick fur adaptation of sea otters provides up to 4X more insulation than fat or blubber that is present in most marine mammals instead!

Yes, sea otters are excellent divers! And it’s because they know how to allocate their energy daily.

In a study by Yeates et al., researchers compared sea otters’ energy diving costs and behavior to other marine mammals. They were surprised that sea otters could maintain a daily energetic balance for diving and foraging similar to larger, far-ranging, and blubber-containing mammals like seals and dolphins.

Unlike these mammals who actively forage and dive throughout the day, sea otters spend 40 to 49% of their daily lives napping or sleeping while motionless in the water. So even though sea otters spend so much energy keeping up with their high metabolic rates, it all gets counterbalanced with rest!

Furthermore, having an exceptionally large lung capacity helps the sea otter hold its breath during a dive, but it also adds to its buoyancy. Not to mention its fur full of trapped air.

Thus, it takes too much energy and physical force to overcome their buoyancy in order to dive underwater.

And yet, the wise and energy-conscious sea otters still power through these obstacles every single day! As long as they get their full 11 hours of sleep, of course.

Many marine mammals, including sea otters, can stay underwater for a certain amount of time before eventually having to come to the surface to breathe.

Unlike fish that have gills and can take in oxygen directly from the water, sea otters have lungs that need oxygen from the surface air or the air above the sea – like every mammal, such as humans!

The longest sea otter dive recorded was 4 minutes and 25 seconds, even though sea otters usually just go for short dives that only last for 50 to 90 seconds of holding in their breaths.

Sea otters can hold their breath for these durations because of their large lung capacities that serve as their bodies’ primary oxygen depot – about 2.5X greater than that of a similar-sized land mammal!

Furthermore, sea otters don’t typically have the need or opportunity to remain underwater longer than a couple of minutes because they prioritize saving their energy.

How Deep Can Sea Otters Dive?

The deepest confirmed dive by a sea otter was 318 feet. Although sea otters only usually dive within 66 to 131 feet of the ocean depths.

Even though sea otters can dive as deep as the equivalent of a 28-story building, they generally hunt and live on shallow shores in the Pacific Ocean. They prefer to make rocky reefs and kelp forests as their hunting grounds so they can easily swim back to the surface to rest and raft.

Diving underwater or to these depths can easily irritate the sea otters’ sinus cavities, so they have also learned to adapt by being able to close their ears and nostrils while underwater.

Why Do Sea Otters Dive Underwater?

Sea otters dive underwater to forage for their food. They spend around 40 to 50% (or 9.5 to 12 hours) of their day on the lookout for seafood.

They have a metabolic rate that’s two to three times higher than a similar-sized terrestrial mammal. Thus, sea otters have big appetites they need to fill to keep up with their metabolism and counteract the heat loss they’re experiencing in their cold environment.

A sea otter can successfully digest its food at 80% to 85% in only three hours, so it needs to go for a hunt again soon to fill its stomach. And the shallower the waters they choose to forage in, the less time and energy they will need to dive for and eat their food.

No, newborn sea otter pups can’t swim during their first month of life.

A sea otter pup is born with baby fur that is different in texture from an adult sea otter’s fur. It is, however, very buoyant, so much, actually, that it makes them float on the water and unable to swim or dive. A pup will usually spend most of its time wholly dependent and riding on its mom’s belly.

Moreover, a sea otter mother will keep her baby buoyant and insulated by grooming and blowing warm, dry air into its fur. Once the pup loses its baby fur, swimming and diving lessons from mom can then begin. It also is the perfect time as a pup’s total oxygen storage capacity in its lungs rapidly reaches the adult level only two months after birth!