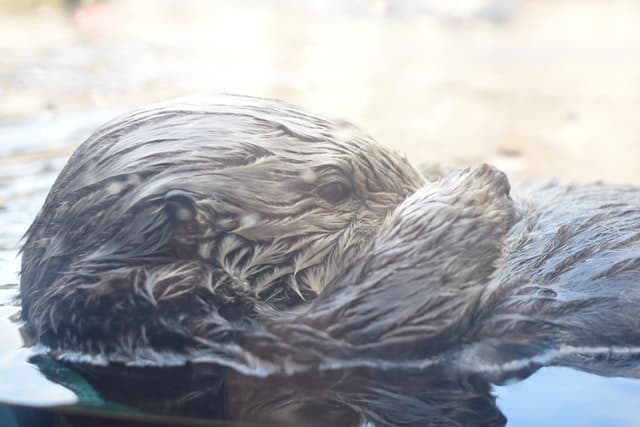 This article looks at the lives, habitats, and status of sea otters.

Where Can Sea Otters Be Found?

Sea otters are found in the shallow waters of the Northern Pacific Ocean. While they can swim deeper, migrating across the Pacific waters, they prefer to live in the areas a half-mile or less offshore.

Sea otters can be found in rocky shores, tide pools, barrier reefs, and kelp beds. Sea otters are divided into three subspecies based on their main habitat areas, which spread from the islands of Japan to the coastal areas of California.

Sea otters live in shallow saltwater coastal areas, where they can find plenty of sea urchins to eat. Rocky areas provide locations to find stones used for cracking the shells.

They also prefer to live near heavy kelp beds, which provide refuge, a food source, and a place to sleep. Sea otters will actually wrap themselves in kelp while they sleep,  to keep themselves from floating away.

Some sea otters never leave the water, so sea otters have adapted to perform many tasks, such as eating and sleeping while floating on their backs.

Sea otters are uniquely adapted for the frigid waters they inhabit, and part of that is an extremely high metabolism. A healthy sea otter will often consume 25% of its own body weight in food every day.

When eating, sea otters will use their stomachs as a table on which to crack sea urchins (their favorite food), using a stone as a hammer.

Sea otters are fairly shy and prefer to avoid humans when possible. This can make conservation efforts tricky, as sea otters will resist study or transplantation.

Do Sea Otters Live All Around The World?

Officially, sea otters are only found within the waters of the northern Pacific.

There are rumors of sea otters in the Atlantic,  but the only confirmed location is Great Britain, where sea otters were transported as part of conservation efforts.

According to marine biologists, the otters found in other parts of the world are not sea otters, but close cousins – marine otters.

Can Sea Otters Only Be Found In The North Pacific Ocean?

The only three recognized species of sea otters are found in the waters of the North Pacific. Their range of habitation extends from the upper edge of southern Alaska to Baja California.

Colonies have also been identified off the northeastern coast of the Asian continent.

Why Are Sea Otters Only Found In The Northern Pacific Waters?

Sea otters don’t follow migration patterns the way many marine lifeforms do. As such, they haven’t really branched out of their original native habitat, beyond small regional migrations as they look for new food sources or territory.

Sea otters are also heavily adapted for the cold environs of the northern waters. The high metabolism and heavy, thick coat needed for them to survive in northern waters are likely to prove detrimental in warmer climates.

Are There Sea Otters In The Atlantic Ocean?

There have been reports of sea otters in the Atlantic, near the Caribbean, and also near the Florida Keys. However, marine biologists say these are actually subspecies of the marine otter.

What is the Difference Between Sea Otters and Marine Otters?

Where In The US Can Sea Otters Be Found?

Sea otters can be found along the entire western coast of the United States, from southern Alaska to the lower half of California. Most marine biologists have separated the Alaskan habitat and the California habitat groups into separate subspecies and designated them the southern and northern sea otters respectively.

Northern sea otters can be found along the south-central and southeastern coast of Alaska. The population habitat extends from the Olympic Peninsula to the northern coasts of Washington state.

The current population of sea otters along the southern coast of Alaska is estimated at about 25,000 and increasing.

Sea otters around Washington state live in the region between Destruction Island and Cape Flattery. As of 2019, there were an estimated 2,000 sea otters living off the coast of Washington state, with numbers increasing every year.

Southern sea otters live exclusively near the coasts of California from San Mateo County to Santa Barbara county. Despite the large habitat range, southern sea otters have fared less well than their northern cousins, and the population is currently only about 3,000 in total.

Are Sea Otters Growing In Numbers In The US?

According to recent reports, the population of northern sea otters is expanding at a healthy rate, with Washington state officials reporting an average increase of 9% a year.

Southern sea otters, however,  don’t seem to be doing as well.  Researchers in California say this group has a relatively stable population, but they aren’t experiencing the same population resurgence their counterparts are.

Why are Southern Sea Otters Struggling?

Southern sea otters are thought to be more vulnerable to pollution issues than the Northern and Russian otter populations. Recent studies also indicate there are fewer food sources available to Southern sea otters.

Where In Canada Can You Find Sea Otters?

Sea otters have been spotted off the west coast of the Canadian territory of British Columbia, as well as the waters around Vancouver Island and the Goose Islands. The last recorded numbers put the population of sea otters in Canadian coastal waters at roughly 900 animals.

Despite this relatively low number, marine biologists are hopeful for the Canadian sea otter population, since it increases 17-20% per year, according to studies.

Are There Sea Otters In Latin and South America?

Today, both Latin and South America are home to several species of marine otters and river otters, but no sea otters. However, with the southern otter population ranging to Baja California, it is possible that we’ll see sea otters returning to Mexican and Latin American waters sometime in the future.

Are There Sea Otters in The Arctic?

Sea otters, specifically the Northern and Russian otters, can be found in the waters of the Arctic circle. In fact, these otters are considered a keystone species in the arctic environs.

Because of this, sea otters are considered a critical part of the ecosystem of the arctic environment, which is one reason their endangered status has caused so much concern.

Do Sea Otters Live In Europe?

There are no sea otters or sea otter species native to the coastal waters of Europe. However, that may change, due to recent developments.

IN 2021, two sea otters, a male, and a female were officially migrated to Birmingham in the United Kingdom, as part of a wildlife conservation effort. They have since become permanent residents of a specially designed facility for the conservation and study of endangered ocean mammals.

There aren’t any plans to breed the two sea otters, but as time goes on, new developments may emerge, and plans may change.

Can Sea Otters Be Found In Asia?

In recent years, a subspecies of sea otter, the Russian otter, has made its home in the waters off of the east coast of Asia. They can be found in the waters between the Aleutian Islands and Japan.

The Aleutian Islands once housed a large population of sea otters, until various threats took their toll on the population. Today, the estimated population is around 6,000, only 30% of the original numbers.

The sea otter population of Russia spreads across the Kamchatka Peninsula, the Commander, and Kuril Islands. Despite the severe depletion of the population in the early 1900s, in recent years the population has regained its former vitality.

Reports indicate the recent numbers of sea otters in Russian waters to be between 15,000 – 20,000, according to overhead aerial surveys.

Prior to the 1700s, it’s thought there were entire colonies of sea otters living off the coastal waters of Japan. Unfortunately, the factors that caused the decline of the Russian sea otter in Russian and Alaskan waters were also felt here, and the population has not yet recovered.

Do Sea Otters Live In Australia?

Even at the height of their population, sea otters never migrated far enough south to be found in the waters of Australia.

Are There Sea Otters In Africa?

There are otters in Africa, however, they are not sea otters. Instead, they are a unique species called the African clawless otter.

As far as any experts can determine, sea otters never migrated far enough south to be found in African waters.

Are There Places In The World Where Sea Otters Are Starting To Appear?

The sea otter population was severely depleted in the 1700s and 1800s, but once they were placed into protected status, the population began to recover. According to the studies, the populations were originally concentrated around northern Japan and from the southern coast of Alaska to the northwestern coast of Mexico.

The Aleutian Islands, Prince William Sound, and the Kuril Islands are reported to be new locations for sea otter populations.

What Environmental Status do Sea Otters Have?

Since 1911, fur trade and similar pursuits have been curtailed to protect at-risk species, including sea otters.

Since 1977, sea otters have been listed as Endangered under the Endangered Species Act. Their species is also listed as depleted in the terms of the Marine Mammal Protection Act.

Of the three different subspecies of sea otters, the Northern Sea Otter has made the best comeback, showing signs of steady population growth and territory expansion.

Russian Sea Otters have had variable luck, thriving in some areas, while struggling in others.

Sea otters are an important part of northern water and nearshore ecosystems. They keep the balance between sea urchins and kelp beds, which support a variety of marine life.

In addition to the kelp forests, sea otters help maintain the balance of estuaries. Both of these environments help reduce the levels of carbon dioxide and support fish populations.

How Do We Help Sea Otters?

Conservationists are working to restore the sea otter populations. Outside of that, following recycling protocols to help reduce pollution risks can help, as can contributing to programs set up for the care and rehabilitation of the species.