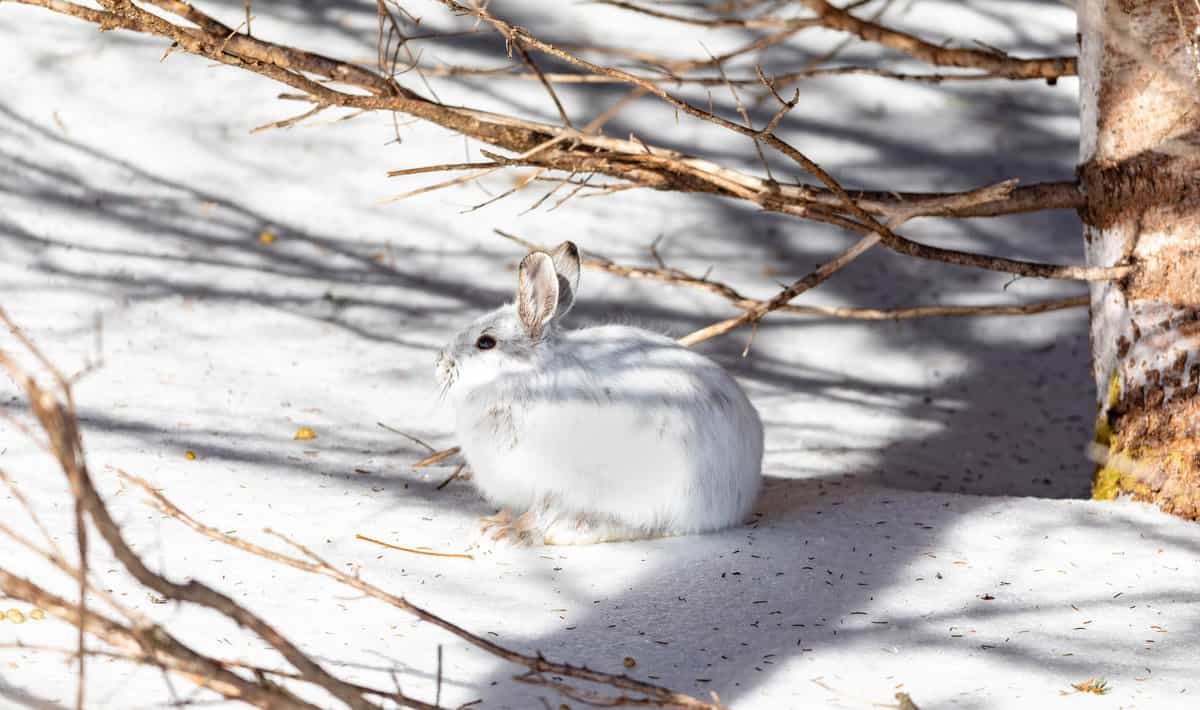 If a tree falls in the forest, does it make a sound when no one is around? Like Schrödinger’s cat, this philosophical question appears to have no definitive answer.

But if the question is, will a snowshoe hare hear a tree fall in the forest? With its super sharp hearing, it definitely will – even as it scampers away.

Join us and have a read as Floofmania explores the excellent sense of hearing of the Snowshoe hare.

Do Snowshoe Hares Have Good Hearing?

Snowshoe hares, also called varying hares, are cute and fluffy mammals that have a razor-sharp hearing because it hinges on their survival in the wild. Alongside this ability they also have the following features that help them to escape their predators:

How Far Away Sounds Can Snowshoe Hares Detect?

This is difficult to determine because there aren’t any studies conducted specifically to measure the sense of hearing of snowshoe hares. This may be because there are many factors to consider such as the intensity of the sound, the weather conditions, and the cooperation of the animal being tested.

To get an idea of how sensitive their hearing is, we can compare the frequency hearing range of its fellow leporid, the rabbit, with other animals as well as humans:

How Do A Snowshoe Hare’s Ears Work?

The shape of the snowshoe hare’s ears contributes to its ability to hear clearly. Most forest animals have fine hairs inside their ears that help them pick up sound and they can move their ears towards the direction of the sound without moving their head.

For the snowshoe hare, the ears can turn as much as 270 degrees, while the animal sits immobile.

Much has been said about the snowshoe hare’s ability to change the color of their fur during seasonal changes but research and information about their ear anatomy are far and between. Emphasis is usually on the non-hearing function, such as the way it keeps the body temperature regulated.

Why Do Snowshoe Hares Have Smaller Ears Than Other Hares?

One of the often mentioned functions of the ears is thermoregulation. Thermoregulation is the ability to maintain the correct body temperature for survival, regardless of the weather conditions.

Among the leporids, those living in warmer climates have bigger ears because the many blood vessels in the pinna (the visible part of the ear) help in cooling down the animal’s body temperature.

Snowshoe hares don’t need a lot of help in that regard, because they don’t live in hot climates and that’s why they have smaller ears.

How Do Snowshoe Hares Use Their Hearing?

Snowshoe hares mainly use their hearing to protect themselves from predators. They are alert to even the slightest sound, which gives them a chance to escape from danger before a predator sees them.

They also like to rest in the woods’ secluded and quiet corners, and their sense of hearing enables them to look for the perfect spot.

They’re not entirely mute though. Snowshoe hares make squealing or screaming sounds when chased by predators or when captured. Who wouldn’t?

When in the mood for love, male and female hares grunt, hiss, and snort at each other when they chase each other around during courtship.

They’re definitely not shy in expressing their interest!

Perhaps the snowshoe hare’s strength is a combination of adaptive qualities that ensures its survival in the wild. Its sense of hearing, while excellent, is best when it can run away with its strong legs and can hide in plain sight because of the color of its fur.

These characteristics are important because snowshoe hares are solitary animals and don’t depend on others to protect them, like other animals that belong to a herd.

Are Snowshoe Hares Easily Scared Off By Noise?

Snowshoe hares are shy, skittish, and ever alert even when resting. The slightest sound that could mean danger will definitely frighten them into hurrying to the next available shelter.

During the day, snowshoe hares rest in shallow depressions called “forms”, sleeping for short periods but still vigilant. They are more active at night when the threat of predation is less and they can relax and forage to their heart’s content.