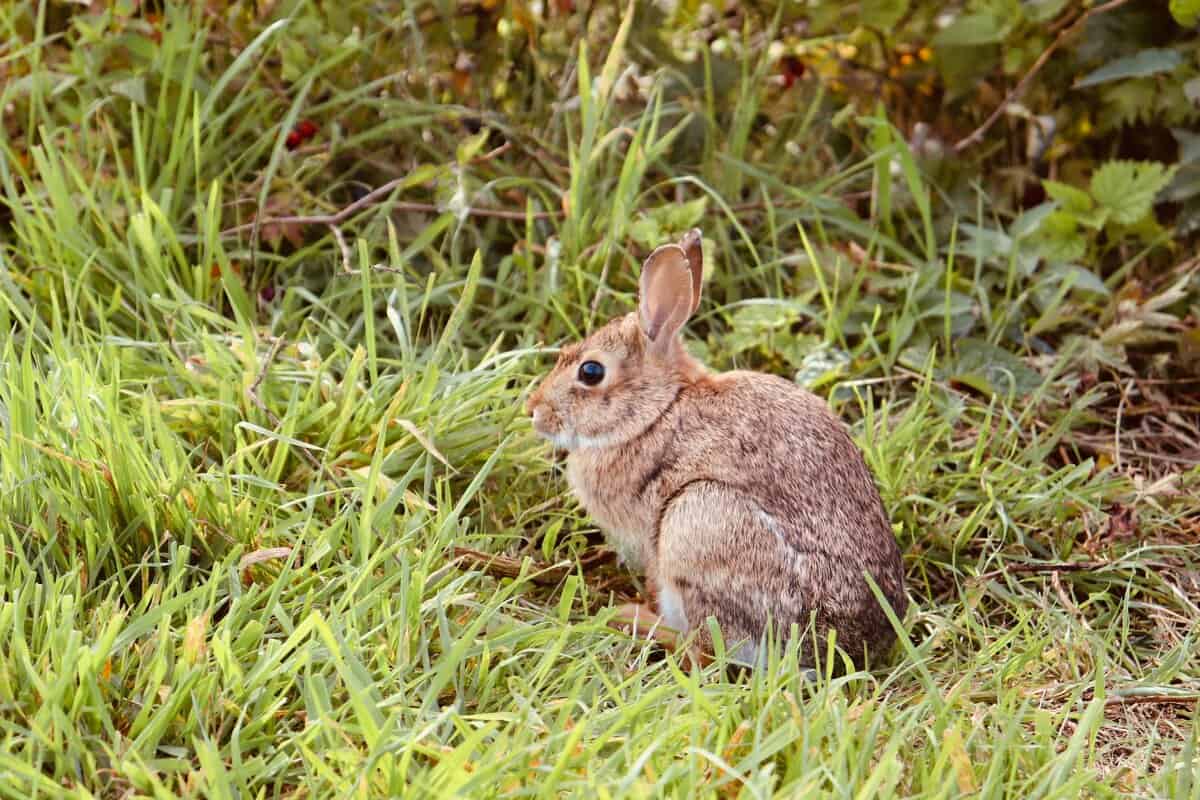 A snowshoe hare is a nocturnal rodent that has a fantastic way of adapting to its environment, like how its fur may change its color depending on the season.

Snowshoe hares have white fur in the winter, which allows them to blend in better with the snowy environment. Its coat takes on a rusty-brown color throughout the spring and summer months as the seasons change.

Now, that will make you wonder… If snowshoe hares change their color in order to adapt to their environment, how can you spot and recognize them?

Let’s look at how we can recognize a snowshoe hare.

How Do I Recognize A Snowshoe Hare?

What you should look for in order to recognize a snowshoe hare depends on the season. As mentioned above, a snowshoe hare changes its color throughout the year depending on its environment. However, there is one trick in a book that can adapt to any season.

One thing that makes snowshoe hares easy to recognize is their ears.  No matter what season we’re in, their ears stay black at the tips, despite the rest of the fur changing color.

The snowshoe hare gets its well-known name from its big, white back feet. Now, if you are having trouble telling apart a snowshoe hare from an ordinary rabbit, you can also look at its legs, which are larger than any hare or rabbit.

You can also notice that their toes are larger and have more fur than other hares. These adaptations allow them to cover a bigger surface with their feet, which lets them walk on snow without sinking in.

How Big Are Snowshoe Hares?

It’s usual for leporids for males to be somewhat smaller than females, as is the case with this species.

In the spring and summer, the snowshoe hare’s fur has a rusty brown color, but in the winter, the coat is white. In addition, it always has a gray underside, and the tips and edges of its tail and ears are always black. It has thick hair on the soles of its feet despite having huge hind feet.

The ears of the snowshoe hare are shorter in length than the ears of other hares. Their fur becomes a brilliant white throughout the winter so that it may blend in with the snow.

What Color Do Snowshoe Hares Have?

The snowshoe hare uses camouflage to assist them in concealing themselves from their natural enemies. They have white fur in the winter, which allows them to blend in better with the snowy environment.

The snowshoe hare’s coat takes on a rusty-brown color throughout the spring and summer months as the seasons change. They usually take ten weeks to completely change their color.

Do Snowshoe Hares Have Any Markings In Their Fur?

Sometimes you can see some patches of white in its fur during summer. These patches of white fur are usually found in their belly area. However, when winter begins, and it’s time for the snowshoe hare to change its fur from brown to white, you will notice that the marking will start to blend with its new white fur.

As mentioned earlier, the snowshoe hare’s ears have a black tip that doesn’t change color regardless of the season they are in.

Don’t worry! The fur markings will return as soon as they change to their rusty-brown color.

The name of snowshoe hare comes from its distinct feet size and appearance. The rodent has broad, hairy feet designed to act like snowshoes. This enables the animal to travel freely on top of layers of snow, without sinking in.

The length of this large animal’s hind legs may range anywhere from 4.6 to 5.8 inches. Wow, that’s pretty incredible, right? You may want to find a ruler and check that size for yourself to have a better idea.

What Does The Snowshoe Hare’s Face And Ears Look Like?

The tips of the ears are black and have white or creamy borders. The tips of their ears don’t change color even with the season which makes it possible to identify a snowshoe hare even during the winter.

The snowshoe hare’s tail looks like your typical hare’s tail. It ranges from 1.5 – 2 inches in length and is covered in white or brown fur. If you want to have a better image of what their tail looks like, just imagine an ordinary pet rabbit.

What Do Snowshoe Hares Look Like When They Move Around?

These rodents are agile and quick when moving. The snowshoe hair can walk and hop like any hare. They can also see almost 360 degrees around them. However, their eyesight isn’t good during the day, so they prefer to move around every night.

Snowshoe hares are often seen hopping and shuffling around the forest. Their hopping behavior is quite impressive too. When they decided to venture out from their hiding places, they always look around before hopping out. This is to make sure that there are no predators around the area.

After making sure that everything is safe, they will continue their hopping movements and stop again after a while to check if there are any predators in sight. This will go on and on till they found what they are looking for.

As a mammal and a rodent to be more precise, the snowshoe hare bears young that are completely formed. They are born with fur, and their eyes are already open as soon as they are born. The baby will be able to hop and begin scavenging for food within ten days after being born. It is common knowledge that rabbits, on the other hand, are born naked and blind.

Within a few hours after giving birth, the mother will begin mating again, with another litter expected within five weeks. One to nine young hares will be born in each litter.

How To Tell A Snowshoe Hare Apart From Other Animals?

Many people think that rabbits are the same as hares and that all their species are similar. With that being said, people often confuse the two. But now, how does a snowshoe hare differ from other similar species such as cottontail rabbits, jackrabbits, and arctic hares?

A good place to start would be to know the difference between a hare and a rabbit. Here are a few differences to help you understand:

Both snowshoe hares and cotton tail rabbits can both be found in the northern US and Canada. As mentioned above, hares are larger than rabbits. With that, you can easily distinguish them by their size and weight. They can be easier to distinguish too during the winter season, as snowshoe changes colors while cottontails remain grayish brown even if it is winter.

Did you know that Jackrabbits are hares? Despite their name, they are considered hares rather than rabbits. The jackrabbit is bigger than the snowshoe hare. However, despite the big size difference, Whitetail and blacktail jackrabbits have smaller feet than snowshoe hares.

Another distinction between these two hares is their ears. Jackrabbit has longer and wider ears than the snowshoe hare.

Finally, a jackrabbit keeps its brown color throughout the year, whereas snowshoe hares change between brown and white depending on the season.

This one is easier to distinguish, but let’s say first what makes them similar. These two hares can both camouflage. But of course, knowing this won’t help you distinguish them, right? If the snowshoe is known for its large feet, arctic hares are known for their long claws.

They also differ in terms of behavior. Let’s just explain it like this, the snowshoe hare has a tendency to hide in an open field. On the other hand, arctic hares love to hide inside holes that they dig.

Where Are Snowshoe Hares Usually Found?

Snowshoe hares are usually found in boreal and upper montane forests. You can also find them in Utah and Minnesota. Snowshoe hares love living in open spaces such as forests and fields.