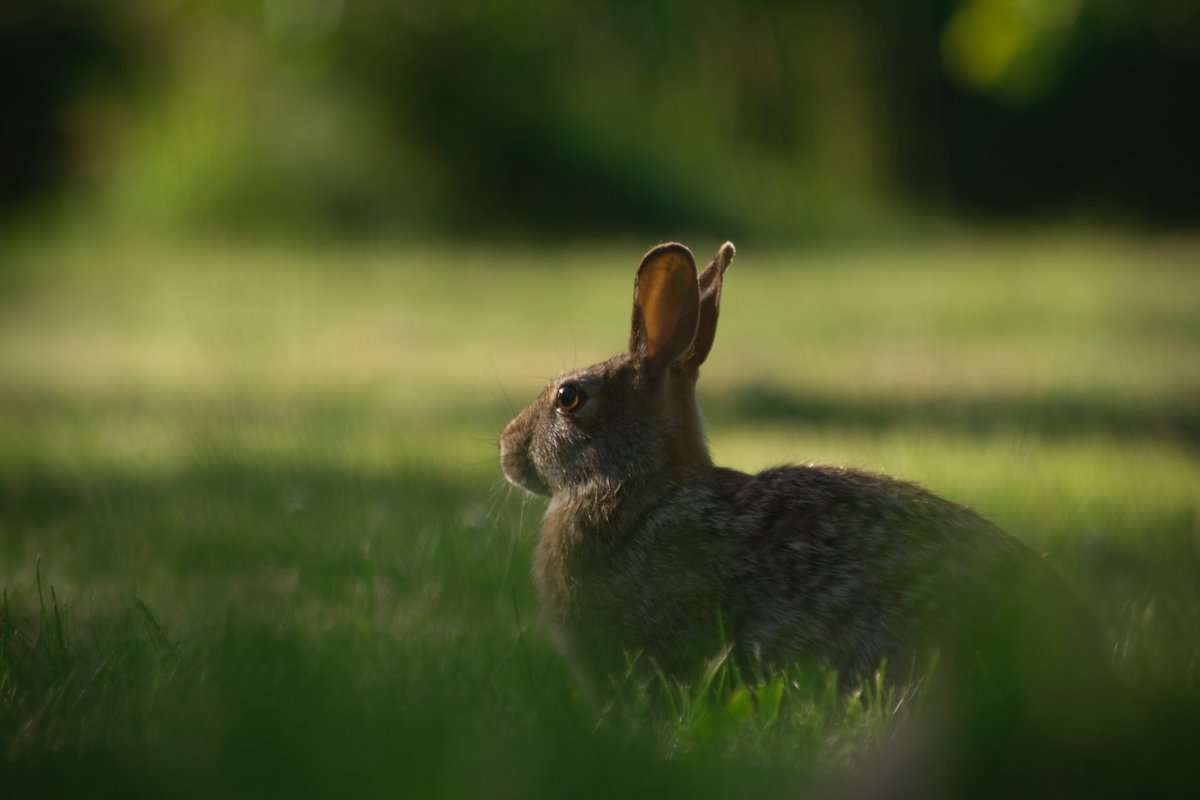 The Snowshoe hare is one of 33 species of hares and jackrabbits found all over boreal forests and high elevation areas of North America, such as the Appalachian Mountains and the Rocky Mountains.

They get their unusual name from the size of their hind feet which indeed resembles snowshoes and function the same way by not sinking into the snow when walking or hopping on it.

In warmer months, the coat of the snowshoe hare is gray/brown colored and bright white in the winter. The way their fur color changes with the seasons gives us a clue about the habits and behavior of this cute and fluffy mammal.

The way animals sleep differs widely across species and depends on many factors such as climate, habitat, and even how much they eat. In this article, we will learn all about how the snowshoe hare sleeps.

Do Snowshoe Hares Sleep Mostly During The Day Or At Night?

Snowshoe hares sleep intermittently during the day. When the sun sets and it gets dark, they start being more active. They are also known to be active on cloudy days.

They are both crepuscular and nocturnal, like other species of hares. This means that they venture out at dusk, stay active for the night, and go to sleep around dawn. Being active when it’s dark makes them least likely to be seen by predators. Sightings will be rare during the day as they will usually be resting under bushes or thickets, sleeping on and off.

However, during the breeding season, snowshoe hares tend to be more diurnal and venture out during the day to find a mate – or three! Males and females have multiple mates.

If you’re hoping to catch a  glimpse of a snowshoe hare in the wild, it could be quite challenging. If you do see one, be prepared to witness it hopping swiftly away from you, because these animals are very shy.

How Do Snowshoe Hares Sleep?

Even in cold climates, snowshoe hares usually don’t snuggle with others of their kind. This is true despite the fact that their home ranges are close together and sometimes even overlap.

They manage to keep warm and comfortable by themselves when they sleep.

Also called the “varying hare” because of the biannual change in their coat color, they are sedentary, which means that they remain in a relaxed, sitting position most of the day. This is an adaptive behavior to evade predators.

At times when they are not sleeping, they will be eating or grooming themselves. They are like little animal introverts, content in doing stuff alone.

How Much Do Snowshoe Hares Sleep?

Snowshoe hares sleep between six to eight hours a day. They don’t sleep in one stretch like humans or some animals do but get by with naps.

Hares, like rabbits, tend to be light sleepers because of the constant danger of being a bobcat’s next meal. Snowshoe hares are constantly hyper-vigilant even when they look like they’re just chilling underneath dense foliage.

When there is a predator nearby, a snowshoe hare will stay completely immobile, but this doesn’t mean that it’s sleeping. It freezes and hopes it remains undetected and camouflaged. If spotted it can burst into a run within seconds.

Where Do Snowshoe Hares Sleep?

Snowshoe hares sleep above ground, under thickets, hedges, and under leaves. As long as they are out of sight from potential predators, they can let down their guard and hunker down to sleep.

This is the reason why snowshoe hares prefer forest areas with a substantial layer of plants and trees that cover the forest floor. They don’t dig holes or burrows like rabbits do, despite the similarities in appearance.

When a snowshoe hare finds a safe and comfortable spot to rest above ground, they sit there motionless most of the day. Snug as a bug in the (forest) rug!

Do Snowshoe Hares Easily Wake From Their Sleep?

As an animal that is at risk of predation, a snowshoe hare is always aware of its surroundings, even while sleeping. Perhaps that is also the reason why they seem to nap more than they sleep deeply. Snowshoes are always alert, and can quickly awaken from even very small disturbances.

There probably aren’t any snowshoe hares who let down their guard and oversleep! With their sharp hearing, they will always be ready to hop away if they sense any danger.

Since they don’t do much during the day, short moments of sleep may be enough for a snowshoe hare unlike us humans who need deep, restorative sleep.

While Snowshoe hares don’t hibernate in winter, they do become less active. During winter, vegetation to feed on is scarce so all they do is eat and hide to conserve energy. Somehow, a winter diet of buds, bark, and twigs is enough to sustain them during the cold season.

This is why their coat color change is extremely important. Having white fur in the backdrop of a blanket of snow is critical to their survival.

Unfortunately, due to climate change, the winters are becoming shorter, and molting into a summer coat does not always happen fast enough. This leaves Snowshoe hares vulnerable to predators.

Do Juvenile Snowshoe Hares Sleep As Much As Adults?

A young Snowshoe hare, called a leveret, may sleep the same amount of time as an adult hare because they are already out and about as soon as they are born and even look like miniature versions of their parents.

The mother snowshoe hare does not have the instinct to prepare a nest for her coming newborns. Once they are born, the leverets find their own spot to hang out in, usually, a shallow depression on the forest floor called a “form”.

They only gather around the mother at dusk to nurse and then off they go to do their own thing.

Snowshoe hares are not leverets for very long. They are considered full-grown adults once they reach a year old. They may even begin to have their first litter during this time.