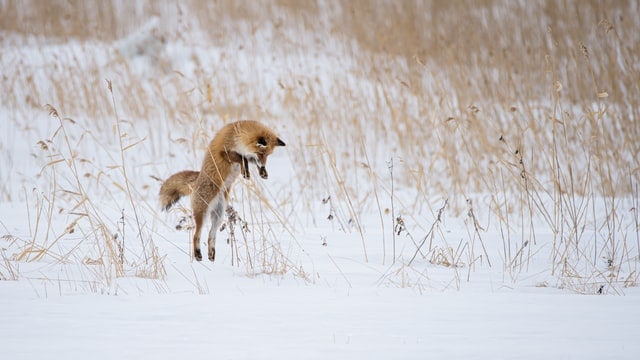 Foxes are highly agile canids. They are fast runners who are faster than domestic cats or dogs. The average red fox runs roughly thirty miles per hour. In a single night, they can run the perimeter of their territory, which can be several dozen miles.

In addition to being a great runner, the red fox is an excellent climber. They can climb trees, ladders, fences, and other vertical structures. Using their sharp, semi-retractable claws, they can climb structures up to six feet tall, despite having an average jumping height of only three feet.

Foxes hop and jump while running as a part of one of their most strategic hunting tactics. They practice mousing skills, where they pounce at their prey from the top. This hunting style is one of the red fox’s most effective and commonly practiced hunting methods.

How Fast Is The Red Fox?

The red fox is a very fast and agile canid that can run over twenty miles per hour. According to The Nature Conservancy, the average adult red fox can run roughly thirty miles per hour, around the same speed as domestic dogs.

The average dog can run around fifteen to twenty miles per hour for short distances. On the other hand, the average house cat can run roughly thirty miles per hour. These speeds are consistent with the red fox depending on its age, gender, and size.

In addition to being highly agile animals, foxes also have very high stamina. The average fox can run several miles before growing tired because of its gentle stride. They waste no excess energy and are precise with their movements.

The red fox can travel the length of its territory throughout the nighttime because of energy conservation and precise movement calculation. Furthermore, the red fox does not rely on sleeping in dens outside of mating season. Therefore, they can settle down to sleep anywhere within their territory lines during the day.

Foxes are eager canids who hop when they run and hunt because they can hear movements under the ground. People often observe these animals hopping and jumping as they run. This hopping is a sign of the red fox hunting small rodents or insects.

Excitement is another reason why foxes may jump. They playfully hop, bounce, and play with each other.

The red fox is an excellent climber who scales fences and climbs trees frequently. They can climb because of their semi-retractable claws. These semi-retractable nails help the red fox grip while their powerful leg muscles and flexible ankles help levy themselves up the trees.

There is no limit to the number of things red foxes may climb if the muscular red fox can stabilize itself well enough.

Why Do Foxes Climb?

Foxes are not natural climbers, but they will climb for necessary reasons like escaping predators or gathering food. They will get easily accessible food like fruits and eggs and continue returning until they exhaust their resources from the tree.

The most common reason foxes climb is to travel from one place to another. If they cannot reach their destination without climbing, the red foxes use their sharp talons to dig into the ground or other structures and pull themselves upwards.

The red fox is a medium-size carnivore who will climb trees to escape some larger predators who are less agile, such as the coyote or wolf. These mammals are members of the same canine family. However, they cannot climb trees because they weigh more, have difficulty balancing, and their claws are less strong. The red fox will remain in the tree until they are safe to come down.

It is common for foxes to climb trees when foraging for food, like peaches, apples, and more. Foxes may also climb into trees and hunt newly hatched birds or steal eggs from nests. Food in trees is easy to access because it is unmoving and regenerates.

Are Foxes Good At Jumping?

Foxes are great at jumping because of their extraordinarily powerful leg strength. The canid’s muscular hind legs help them push from the ground and launch themselves in the direction of their choosing. Furthermore, their flexible ankles help the red fox jump and land effortlessly in angular positions.

This strong leg strength and supreme jumping abilities evolved to survive large predators. The fox jumps to escape enemies and out of human eyesight. Furthermore, their extreme jumping skills mean that the red fox may jump over walls, fences, streams, and more if they are in their way.

Will Foxes Jump Through Windows?

A fox can jump through a window if they need to. However, they are generally terrified of humans and will not approach your home even if they smell something delicious inside your house.

How High and Far Can A Red Fox Jump?

The red fox can jump roughly three feet, a few feet shorter than what cats and dogs can jump. The average domestic cat can jump four to six times its height. This height averages to around four to five feet, with some exceptions depending on the breed, gender, and age. The average dog can jump around six feet.

Why Do Foxes Jump?

The red fox will jump for many reasons, such as travel or excitement. Foxes prefer limiting the amount of effort they exert, and sometimes jumping or leaping over obstacles is much easier than running around, or climbing over them.

Red Foxes Jump When They Are Excited

When red foxes get excited, they sometimes jump. They will do this while playing with each other, often as kits and juveniles. Red foxes do not outgrow this playful behavior.

Red foxes sometimes use jumping as a shortcut to travel from one place to another to shorten the time it takes to get somewhere.

It is common to see a fox jump across river banks or streams instead of walking around because it shortens the distance. Any places with short distances are great for jumping because it helps the fox limit traveling time.

The red fox will jump from above to surprise its prey. Red foxes use this hunting technique so regularly that scientists coined it. Scientists call the technique mousing, where the canid tracks prey closely before pouncing on it from above. They often practice this behavior in snowy environments because of how easy it is to dive into the snow.

Foxes dive headfirst into the snow when hunting small rodents like mice or rats. The red fox observes the snow as it moves before deep diving under to catch its unsuspecting prey. The red fox does this in desert regions too.

Why Do Foxes Sometimes Run In Circles?

Canines like the wild fox chase their tails and run in circles for many reasons. The root cause for tail chasing is often physical, such as mange or fleas. Infection, injury, or parasites are other causes of circling. They may chase their tails because they suffer emotional struggles like stress, boredom, or anger.

Although a canine might appear fine, do not approach them if they are circling.

Foxes Circle Because Of Emotion

Chasing other pack members or running in circles is caused by their varying moods, like boredom and anger. Foxes may chase their tails, often called circling, because they are frustrated. If a transient fox wanders onto another fox’s territory, a stressed and frustrated fox may show anger by circling and chasing the intruder.

Foxes Run In Circles Because Of Illness or Disease

Red foxes may run in circles because they suffer from negative health, like canine distemper or mange. They may chase their tails or run in circles for neurological reasons too. The confusion from distemper and rabies may cause it to chase its tail. Furthermore, the wild canid will bite at its tail or skin because of the stress of illness and disease.

Do Foxes Get Hurt From Falling?

Foxes have great balance, and they will not get hurt from falling unless they fall from tall heights. A fox will not land on its feet like cats.

Do Foxes Jump Onto Cars?

Urban foxes may jump onto cars when they are not moving. Jumping onto cars is a way of getting from one place to another, such as roof access, but they’ll never jump unto moving cars.